Jim Warren is the new Trail Boss for the Sedona Westerners! 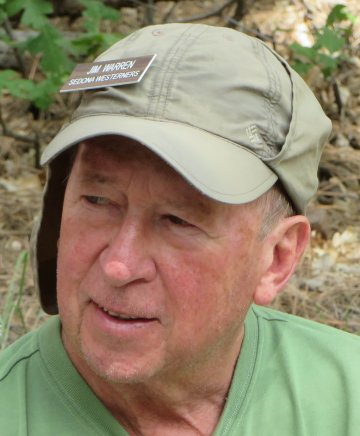 Jim was born and raised in Suffern, New York, a bedroom community of NYC and did Military Service in the Navy in Rhode Island where he learned computing.  After 4 years of military service, he attended Fairleigh Dickinson University in New Jersey, achieved a degree in accounting, and finally his MBA, all while working in the computing field, at various companies.  One point of note here:  at Warner Lambert, Jim met his charming bride, Linda… not at the company they both worked at, but rather on the last day of his last course at Fairleigh Dickinson!  After that there was suddenly a lot of ‘research’ he had to do at the library where Linda worked…. Hmmmm.

Jim’s IT management career continued with 8 years at Bayer.  He later moved on and finished his career in academia developing and running the IT department at a New Jersey community college.  This job was 5 minutes from home which was a welcome change from the stressful commute on Route 80.  It afforded an opportunity to build an IT organization from scratch as the outsourcing had not been working well for the college.  In many respects this was the most personally rewarding experience of his career.  He still maintains his friendships and networks from back east.  Over 40 years in a field that he absolutely loved made the time go by quickly.

In 2000 Jim and Linda hooked up a 5th wheel and took their first trip to the western US, travelling to Yellowstone.  Then in ‘04 when they visited the Grand Canyon, they really fell in love with the southwest.  Fast forward to 2016 and Jim and Linda have hiked the canyon at least 10 times and celebrated New Years, Christmas and the 4th of July at Phantom Ranch.  They only need to hike there in September, October and November to have hiked to it in every month of the year.  It is nice to only have those months left as June, July and August left a few special memories that are sufficient to not want to repeat the experience.

It isn’t much of a stretch to say that the goal of hiking the canyon for the first time in 2004 may have been lifesaving.  When that goal was established Jim started a training regimen which shortly led to an appointment with a cardiologist which in turn lead to an angiogram, followed by an angioplasty and then to a stent.  Then came a change in diet, a change in focus, adherence to a prescribed rehab routine, and a loss of over 30 lbs.  With hard work and a new appreciation of being active the hike to Phantom Ranch was realized in April of 2004.  It was all a life changing experience.

Fast forward to being retired and moving to Arizona with a continuing commitment to keeping at least reasonably fit.  The Sedona Westerners provided the vehicle for this to happen.  Both Linda and Jim joined the Sedona Westerners in 2012 but didn’t immediately become actively involved.  But that changed with the 2013/14 season when Jim was the Dogie Boss.  After a year off he stepped up to the Wagon Boss position and has now taken over as Trail Boss.

Remarkably, the Sedona Westerners set a great example of how to be involved with community without being in any way political.  What he says he discovered over the years are a group of people who love the hiking while also being involved with the community as docents, site stewards, singers in musical groups, supporters of local professional and amateur orchestras, volunteers for search and rescue, volunteers with Friends of the Forest, philanthropists, volunteers for community organizations, and fund raisers.  What a wonderful group of people to be associated with.

While Linda sometimes refers to his other passion as a collection of old parts, Jim still likes cars from the era of his youth.  With the support of his wonderful wife he finally has the garage he always wanted and can now work on a number of restoration projects that have languished for years.  The goal is to pass on to his children some relics to be enjoyed by them and their families.

Please join me in welcoming Jim Warren as the Sedona Westerners’ Trail Boss for this season 2016 – 2017.

If you are interested in joining the club, please visit the Sedona Westerners website or just come to one of our monthly meetings. The next one will be on Thursday, November 10, at 7 pm, at Saint John Vianney Parish, 180 St. John Vianney Lane in Sedona.