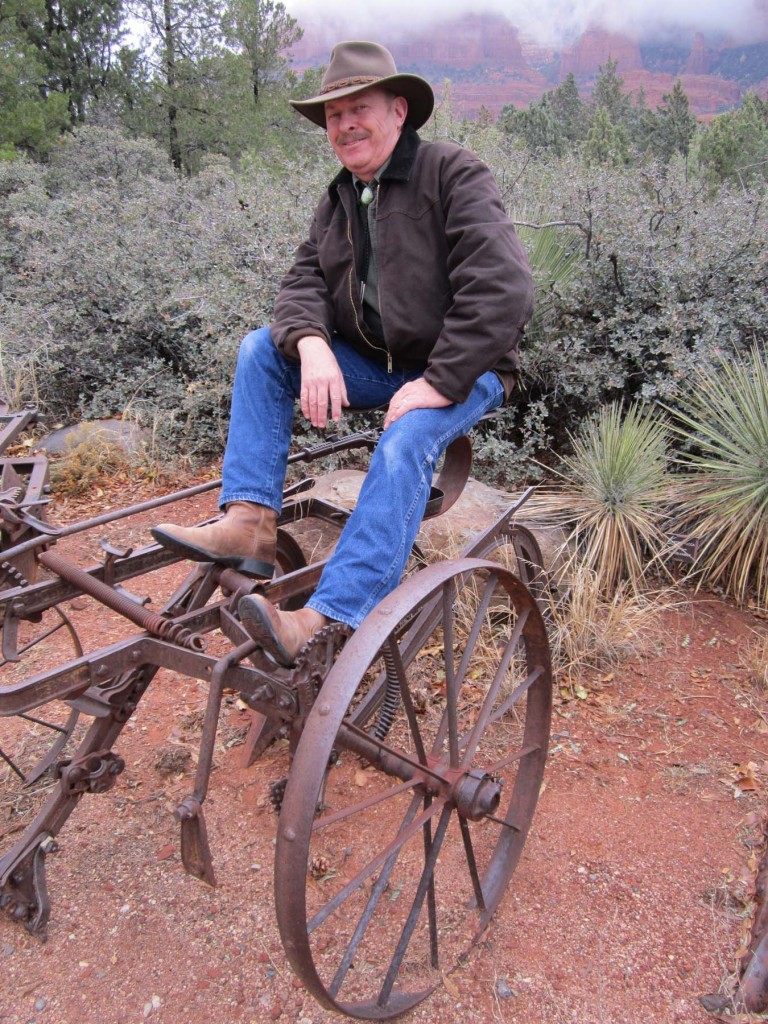 The evening of September 8, 2016 was full of wild and sometimes wacky cowboy and western poems and prose presented to the Sedona Westerners at Saint John Vianney Parish by Sedona's own Michael "Coyote" Peach at the first meeting of the new hiking season for the Westerners.

Peach was born and grew up in Arizona, he holds a B.A. with honors in philosophy from Northern Arizona University and an M.F.A. in theatre from the California Institute of the Arts.  Peach is a regular performer at the Sedona Heritage Museum and has published both books and poems, and his original plays have been performed on numerous occasions. Peach is a certified interpretive trainer of southwest history and archeology.

Peach can tell a story that captivates his audience, as he did with the Westerners.  At times he combines Arizona history with his folksy presentation and his off beat sense of humor to make history entertaining.  From the content of his stories it is evident that he is a serious student of history of the southwest and Arizona in particular.

Peach's stories and poems run the gauntlet from John Bartlett who, in 1850 through 1853, served as commissioner to determine the boundary between Mexico and the United States and how Arizona missed out on getting a seaport to a parable about a coyote, a mountain lion and a rabbit.

Each of Peach's tales has a moral to it, clearly delineating right from wrong, whether it is a dispute over the contents of a gold mine or a wager between a city slicker and a cattle rancher, just like you would expect from an old fashion Western movie, where the good guys wear white hats and the bad guys black ones.

Peach is able to enhance his stories through facial expressions, hand gestures, and accents.  He often steps into the first person and becomes Irish J.J. "Jim" Thompson, one of the very first settlers in Oak Creek Canyon (think of Indian Gardens, that was his first home in Oak Creek) or the character of a wise old cattle rancher.

Peach's stories are full of verbal illustrations that conjure up longhorns, rustlers, cowboys, bank robbers, stampedes, campfires, rattlesnakes, beans and coffee (good and bad) and quests for riches, be it treasure, veins of gold underground, or the money in some unsuspecting victim's pocket.

If you want to hear some of Peach's stories, and learn the punch lines to them, check the calendar for the Sedona Heritage Museum and local newspaper listings for his next performances.  If you want to know how and why he added "Coyote" to his name you will have to read his book: "The Facts Keep Getting In The Way of the Story", which can be purchased locally and is available at the Sedona Heritage Museum.

If you are interested in joining the Sedona Westerners hiking club, visit our website:  www.sedonawesterners.org or come to one of our monthly meetings, the next one will be on Thursday November 10, at 7 p.m. at St. John Vianney Parish, 180 St. John Vianney Lane in Sedona.