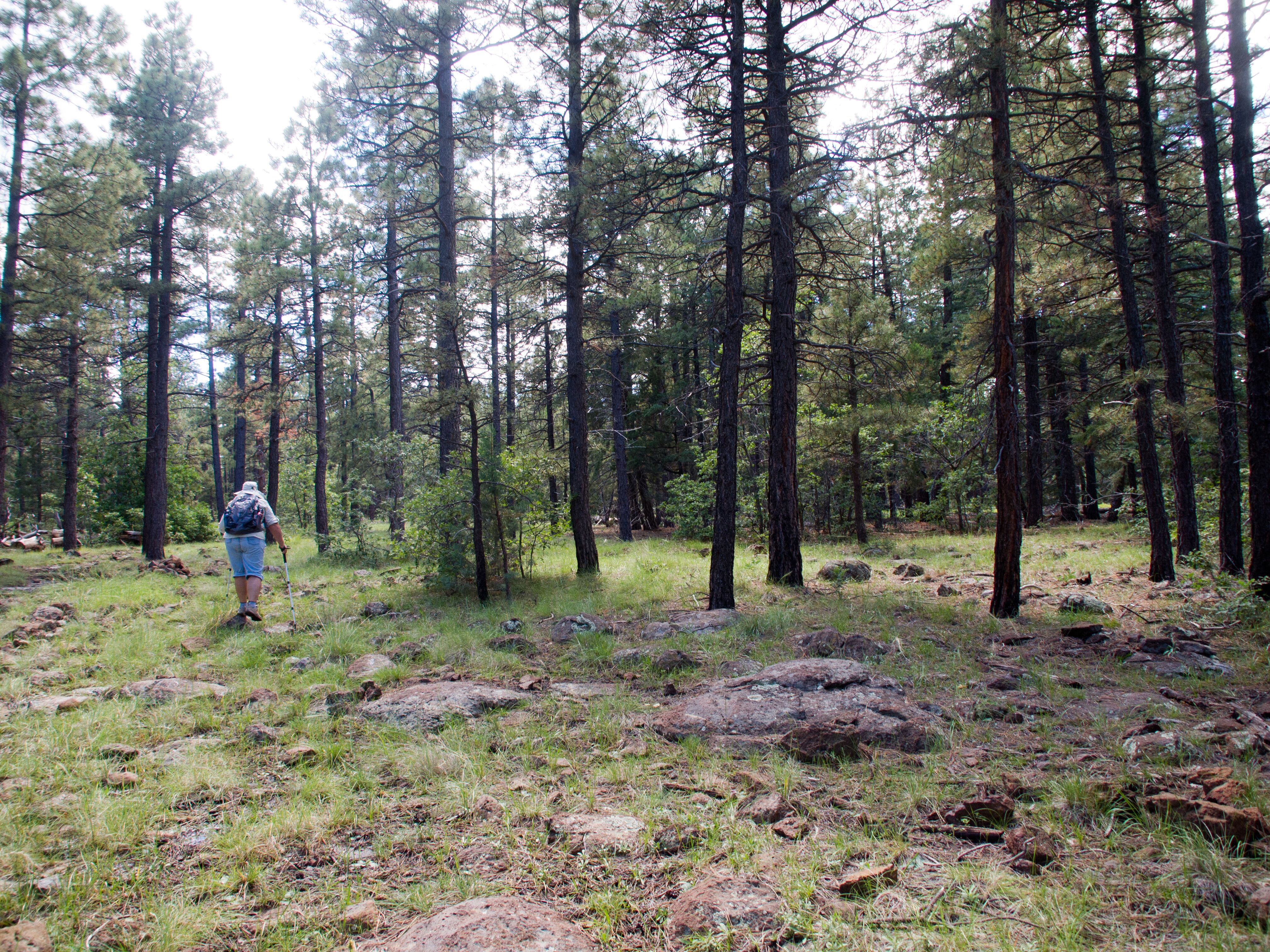 For much of the hike there was little shade and, unlike many hikes, the downhill is at the beginning so one of the last sections involves a significant climb to the forested plateau which is at a higher elevation than the trail head. Thus, the Weste

The three trail loop on top of Mingus Mountain provides spectacular views of the Verde Valley while offering a relatively short hike at altitude.  Each of the trails are well worn and easy to follow and the Verde Ranger District usually has a nice trail map available at one of the parking areas.  Our hike started on Trail 106 high up on the mountain at about 7400 ft.  The trail descends to about 6600 ft. and after a gradual climb connects with Trail 105A.  Trail 105A is a short trail connecting 106 to 105.  Trail 105 takes the hiker up a moderately steep climb with a number of switchbacks to the forested top of the mountain.  Once on top, the trail winds through a mature forest to the launch area used for parasailers and hang gliders which is at just over 7800 ft.

Pick a good day with favorable winds and you may get to see pilots run off the edge of the mountain and disappear below before picking up enough lift to suddenly be soaring high above you.  It’s a nice bonus and a good way to rest up after the approximate 1200 ft. elevation gain during the final mile or so of the hike up.

As for the views, we were able to see during the course of the hike, the foothills of Cottonwood, the Cottonwood Airport, Cottonwood proper, the red rocks of Sedona, Clarkdale, sections of Jerome and the San Francisco peaks far to the north.  The track of the Verde River was easily discernable given the pronounced difference in the vegetation near the river.  Several landmarks are easy to spot particularly the slag pile near the Cottonwood fairgrounds left over from the United Verde Extension material being smelted at the long gone Clemenceau operation and the much larger slag pile near the Verde River from the smelter in Clarkdale.

On the day of our most recent hike on these trails we were fortunate to spot two horned toads.  One was remarkably large and posed nicely for all the hikers to walk slowly by and get a good look.  Another was quite immature and apparently somewhat camera shy and in a hurry to hide under a rock.  Fortunately, we didn’t encounter any snakes on this particular hike.

While this is a very nice hike in the early fall, it lacks the color that we have witnessed when hiking it in the spring and early summer when cactus are in bloom and are joined by many wild flowers.  The Agave plants that sent their flower spikes up high in the spring are now withering as they slowly die hopefully to be replaced by seedlings if nature is kind to them.  Still the plants have their own beauty and should be respected for living above 7000 ft., in poor soil, and with little rain.

During our final passage before reaching the hang glider launch site we saw a few squirrels moving around no doubt trying to assure themselves a winter supply of food.  With all the mature pines and being in an area that is generally closed off in the winter they should have no problem surviving.

While not anywhere near the most challenging hike that the Mustangs take on during the hiking season, it is visually one of the most rewarding.  But, that’s just one person’s opinion because when you hike in Sedona and the Verde Valley you are rarely without beautiful vistas to enjoy.

If you are interested in joining the club, visit the Sedona Westerners website or just come to one of our monthly meetings. The next one will be on Thursday, November 10 , 2016 at 7 pm at Saint John Vianney Parish, 180 St. John Vianney Lane in Sedona.

Sedona Westerners this week is written by Jim Warren, and appears every Friday in the Red Rock News.