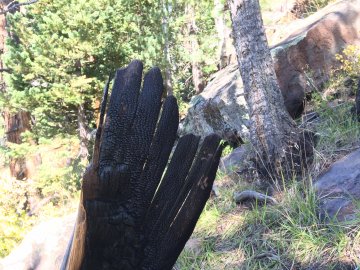 Art in Nature. Along the way to our destination, breaks in the forest opened up wide vistas of Flagstaff. Because of the burnt stumps, we surmised the clearings were most likely caused by past wildfires. Some of the stumps even resembled works of a

Hi Ho Hi Ho off to Flagstaff we go to escape the heat of Sedona; or so we thought.  Westerner hikes are typically scheduled in May for the upcoming hiking season beginning in September.   So to avoid the anticipated hot weather in October, the Dogies’ Hike Boss had scheduled a Fall hike in Flagstaff – the well-known Kachina Trail.  Little did he know that the Sedona heat would break in early October bringing perfect hiking weather to Sedona and cold temperatures to Flagstaff.  Oh well the Fall colors in Flag are always a welcome sight to Sedonanites.

We left Sedona early in the morning to reach the trailhead by 9 am and were welcomed by the golden Aspens as we drove up to our trailhead on the side of the mountain. With temperature hovering in the 40s, we all brought out our coats and gloves to brave the cool windy weather before we started our hike.  The trailhead starts at 9500 feet elevation; so it did not take long before us flatlanders from Sedona were huffing and puffing our way up the mountainside.  As we enjoyed the vistas the wind began to pick up which only added to the brisk Fall and yes the golden Aspens began to quake.

The Kachina trail (known as Trail #150 to the Forest Service) covers 5 miles skirting the South slope of the San Francisco Peaks.  We had started our hike at the upper end and hiked out 3 miles of rolling terrain through pines, Douglas Fir and, of course, Aspen groves.   We marveled at the waist high bracken ferns growing on the mountainside.  Unfortunately, the cold Fall mountain weather had already turned the ferns brown, foretelling the coming winter snows. Our route took us past a recess where a bed of loose volcanic debris had eroded leaving a shallow cave.

The vistas included a view of Northern Arizona University and the Lumberjack’s Arena, as well as our feature photo:  Art in Nature.  While enjoying the views we tried to identify the mountains in the distance.  This led to friendly debates as we each tried to expound on our vast knowledge of Flagstaff landmarks and mountain formations.  However, we all agreed that the highest peak in the distance was Kendrick Mountain.

Although an occasional black bear and elk have been reported on the trail, none were spotted by our group.  However, several barking squirrels made it known that we were disturbing their Fall food gathering.  At several points along our route we had to climb over or under freshly fallen Aspen; some even still had green leaves.  Our hike leader and her husband (Terri and Jon Petrescu) had just scouted the hike the prior week and noted that the trail had been clear at that time.  In the interim a storm must have come through the forest and downed the trees.  This led to speculation as to the intensity and timing of the storm since none of the Dogies could recall a strong storm in the last week, reinforcing the obvious that the Flagstaff mountains can bring storms that are never felt by the high desert of Sedona.

We arrived at a wide clearing late in the morning near our 3 mile turn around point.  There we found seating to enjoy the views and partake of an early lunch.  Most of us found a place in the sun as the temperature was still cooler than what we were used to in Sedona and was made cooler by the stiff breeze.  After a quick repast and strengthened by homemade cookies from our leader, we voted to continue our hike to our goal of 3 miles before turning around.

The return trip to the trailhead, even though it was on the same trail, brought a different perspective.  As is the case many times, the return seemed twice as long as the trip out. Nevertheless, we finally arrived at the trailhead and our cars.  We immediately began comparing our statistics from various GPS gadgets.  Most reported the total length of the hike to be 6 miles, confirming that 3 times 2 still equals 6.  The gadgets also confirmed that we had traversed almost 1200 cumulative feet of elevation gain as we had hiked the rolling route along the San Francisco Peaks.  After thanking our hike leader, we head back to the warmer climate of Sedona where we could nurse our sore legs.

If you are interested in joining the club, visit www.sedonawesterners.org or just come to one of our monthly meetings. The next one will be on Thursday, November 10, 2016 at 7 pm at Saint John Vianney Parish, 180 St. John Vianney Lane in Sedona.

Sedona Westerners, written this week by Jim Kemper, appears every Friday in the Red Rock News.