Earthquakes do happen in Sedona 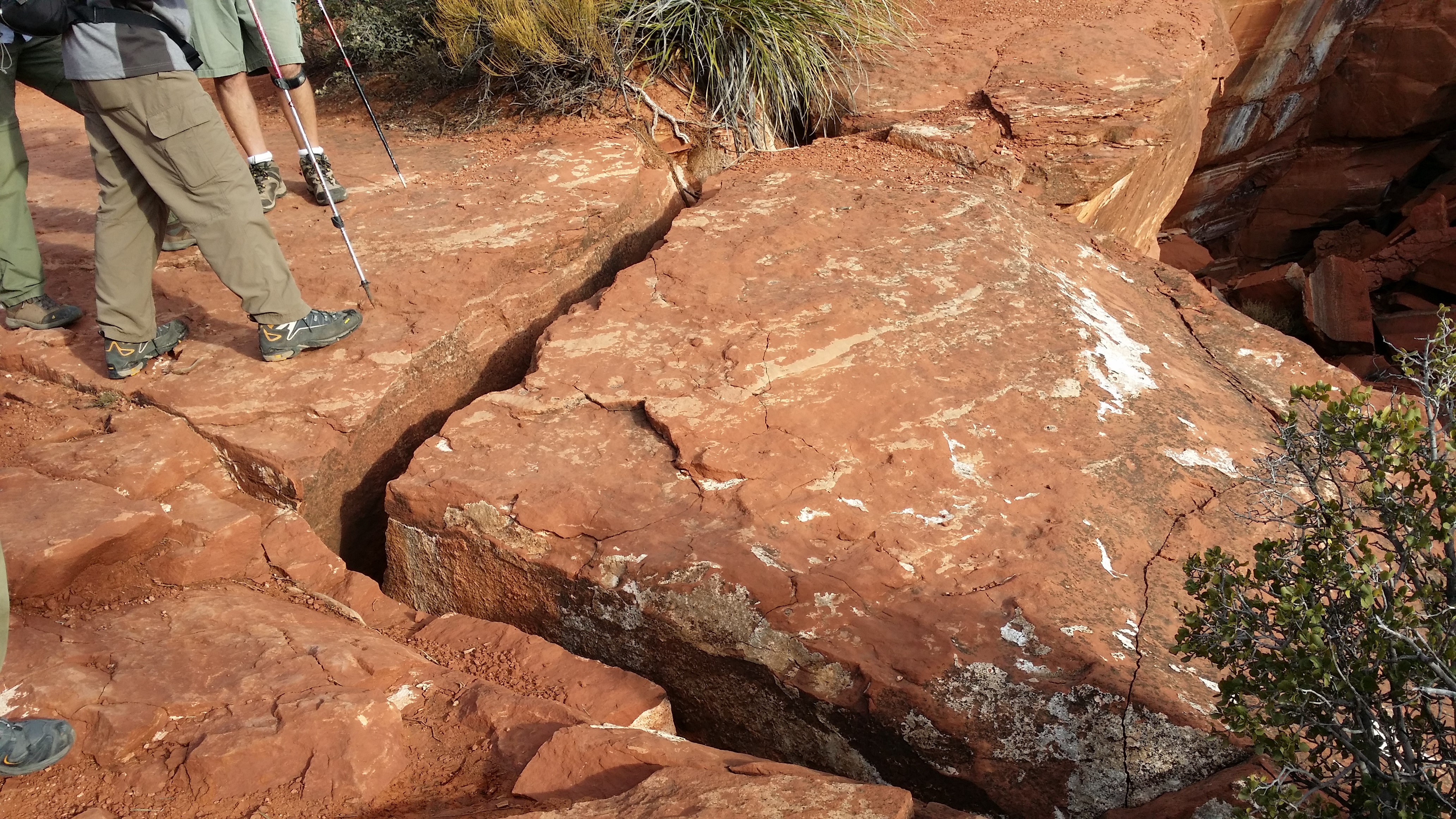 Above is a photo of a crack in the rock along the rim, left hand corner of DevilÃ¢â¬â ¢s Kitchen. This crack is observable evidence of the slabÃ¢â¬â ¢s movement due to earthquakes in Sedona.

This article was written in 2015, and after a recent Earthquake.

The Mustangs group of the Sedona Westerners departed from Soldiers Pass trailhead.  Attendance was bountiful as many hikers were interested in enjoying the nice early spring temperatures.  This group included two new hikers who had just joined the club.    Therefore, we broke into three appropriately sized groups.

Our first objective was to inspect the sinkhole known as Devil’s Kitchen.  We were curious to see if there were any visible effects of the two earthquakes which occurred on November 30, 2014 and September 26, 2015 and struck along the Oak Creek Canyon Fault.  The hikers who were familiar with the site remarked about how much wider certain cracks had become.  One separation, in particular, which had been about one hand’s width wide was now significantly wider, but the large slab still seemed to be impinged at one point.  It could take another earthquake, another day, or another century for this hunk of rock to join the other boulders at the bottom of the sinkhole.

As Arizona is creeping westward at a rate of only a couple of millimeters per year, it experiences very infrequent releases of seismic tension.  Arizonans may only witness earthquakes once or twice in their lifetime.  The November earthquake struck at 11 p.m. and occurred about seven miles below ground, with its epicenter seven miles north of Sedona, sixteen miles southwest of Flagstaff, and twenty two miles northeast of Cottonwood, according to the US Geological Survey.

While the two earthquakes measured 4.7 and 2.9 in magnitude, there have been larger events, including several 6.0-magnitude quakes near Flagstaff in 1906, 1910, and 1912.  Other notable quakes occurred at the South Rim of the Grand Canyon and near Fredonia in 1959.  Interestingly, according to the USGS, one of the reasons for Arizona’s susceptibility to earthquakes is due to the extremes in elevation between 1000 feet in Phoenix to 7000 feet in Flagstaff.  However, tempering this condition is the fact that Arizona’s faults are shorter and disconnected, so a quake produces much more shaking and smaller movements compared to quakes in California.

Having concluded our examination of the crack, the hikers proceeded by way of the Cibola trail in the direction of Brins Mesa.   Temperatures were lovely and the moist soils from recent rains made for quiet, non-dusty trails.  They moved stealthily along the trail, ascending to view some awesome vistas.  As usual, there was much good natured camaraderie and many exchanges of information regarding upcoming holiday travel and hosting plans.  There was so much conversation that after a brief break, one of the hikers inquired about the whereabouts of his wife.  The tailgater, with full knowledge of the wife’s location, remarked that the husband should not be concerned, “The club got good money for her.”  After a good laugh, she was accounted for and all was well.

As the hike continued conditions became a bit warmer and more humid.  The hikers speculated this might be due to the approaching rain storm.  They all shed layers and continued to enjoy the beautiful hike. As they trekked onward they were treated to the easily identifiable call of the Canyon Wren.

The Mustang hiking group stopped for lunch break and soaked in the wonderful Sedona scenery, topped off with Ghirardelli chocolate treats provided by the hike leader.  Refreshed and recharged, the intrepid hikers returned to the starting point with their usual sense of accomplishment and appreciation for their surroundings and their fellow hikers.

If you are interested in joining the club, visit the Sedona Westerners at www.sedonawesterns.org or just come to one of our monthly meetings. The next one will be on Thursday, January 12, 2017 at 7 pm at Saint John Vianney Parish, 180 St. John Vianney Lane in Sedona.

Sedona Westerners, written this week by Linda Warren appears every Friday in the Red Rock News.