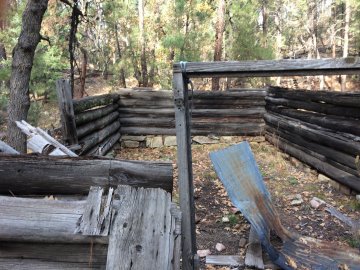 The rather dilapidated cabin on Secret Canyon Trail. Our leader spun some tall tales about the origin and use of the cabin, which some of the more gullible hikers may have believed.

Typically, a Mustang hike ranges from 7 to 9 miles with up to 2000 cumulative feet of elevation gain.  So when John Losse and Brad Kincaid proposed rejuvenating an old Westerner hike which was almost 12 miles long, that raised some eyebrows.  But our fearless Mustang Boss, Tom Yager said “Go for it.”

The Secret Mountain Trail or Trail #109 to the Forest Service, starts at the end of Forest Service Road 538 at an elevation of about 6600 feet.  To access the trailhead one must leave 89A at the top of the switchbacks going toward Flagstaff and traverse 22 miles over progressively more challenging gravel and dirt roads. A high clearance vehicle is highly recommended if not a necessity.  Total drive time from Sedona was estimated to be 2 hours. So much to the chagrin of several of us, Tom called for a meet up time of 6 a.m.  To his surprise a full group showed up in various states of readiness at this early hour.

As is the case with each Westerner hike, the rules and trail etiquette must be read to the participants.  Unfortunately for Tom at 6 a.m. it was still dark making reading difficult so we were faced with our first crisis of the day.  The Mustangs being ever prepared scouts quickly produced a flashlight and the rules were hastily read.

As we carpooled toward our trailhead after leaving 89A, we were treated to a grand view of the San Francisco Peaks through a break in the forest that surrounded the road.  We were making good time along our 22 mile backcountry route when we were faced with our second crisis. Our caravan had stopped when the lead car noticed that the road that had been previously scouted was closed for repairs.  Thanks to some quick route finding by our lead driver and alternative route was found.

We arrived at the trailhead at about 8 a.m. and hastily unloaded our packs and hiking sticks in preparation for our day’s hike.  Shortly after beginning our hike we passed the intersection with the Loy Canyon Trail which heads some 10 miles down Loy Canyon.  Thereafter we came upon a long abandoned log cabin and corral.

Our hike leader John Losse began to spin several tall tales about the history of the cabin, a few of which may have been believed by our more gullible hikers, and the most unbelievable of all was, given the remoteness of the location, that the cabin was used by some “bad hombres” who used the site to hide their stolen horses until a sale could be arranged.  We obambulated the site searching for probative evidence to support our leader’s stories but none was found.

Besides the fresh mountain air, one of the attractions of the Secret Mountain Trail is the ability to view well known Sedona canyons from the opposite direction.  The views along the Trail are described as some of the most spectacular in all of Sedona. Our first canyon view was Loy Canyon.  Next was a view of Hart Well Canyon followed by Boynton Canyon.

As we peered over Boynton Canyon a few of the Westerner favorite rock formations were identified.  The most celebrate formation was that of the “Honey Bear.”  Several of the newer Westerner members asked about the nomenclature.  After some convincing and cajoling even the new members were creative enough to imagine the formation really did look like a bear on its hind legs reaching up into a tree filled with honey.  This was the first time that any of us had seen the Honey bear from the top of Secret Mountain and we were pleased that it still deserved its name.

After a brief rest we continued the hike until the trail suddenly ended and we realized that the trail had disappeared.  A sharp trail eye spotted it through head high xerphilic Manzanita and we were back on our way. Our leader announced that we were at over 6 miles and it was time to turn back.  But food first.  We enjoyed our lunch while admiring the views of Long Canyon.

A final highlight of the hike happened on the car caravan back to Sedona.  At least some of the Westerners saw a herd of elk cross in front of the lead cars.  Their elegance was admired as they seemed to flow as one across the road.

Sedona Westerners, written this week by Jim Kemper, appears every Friday in the Red Rock News.