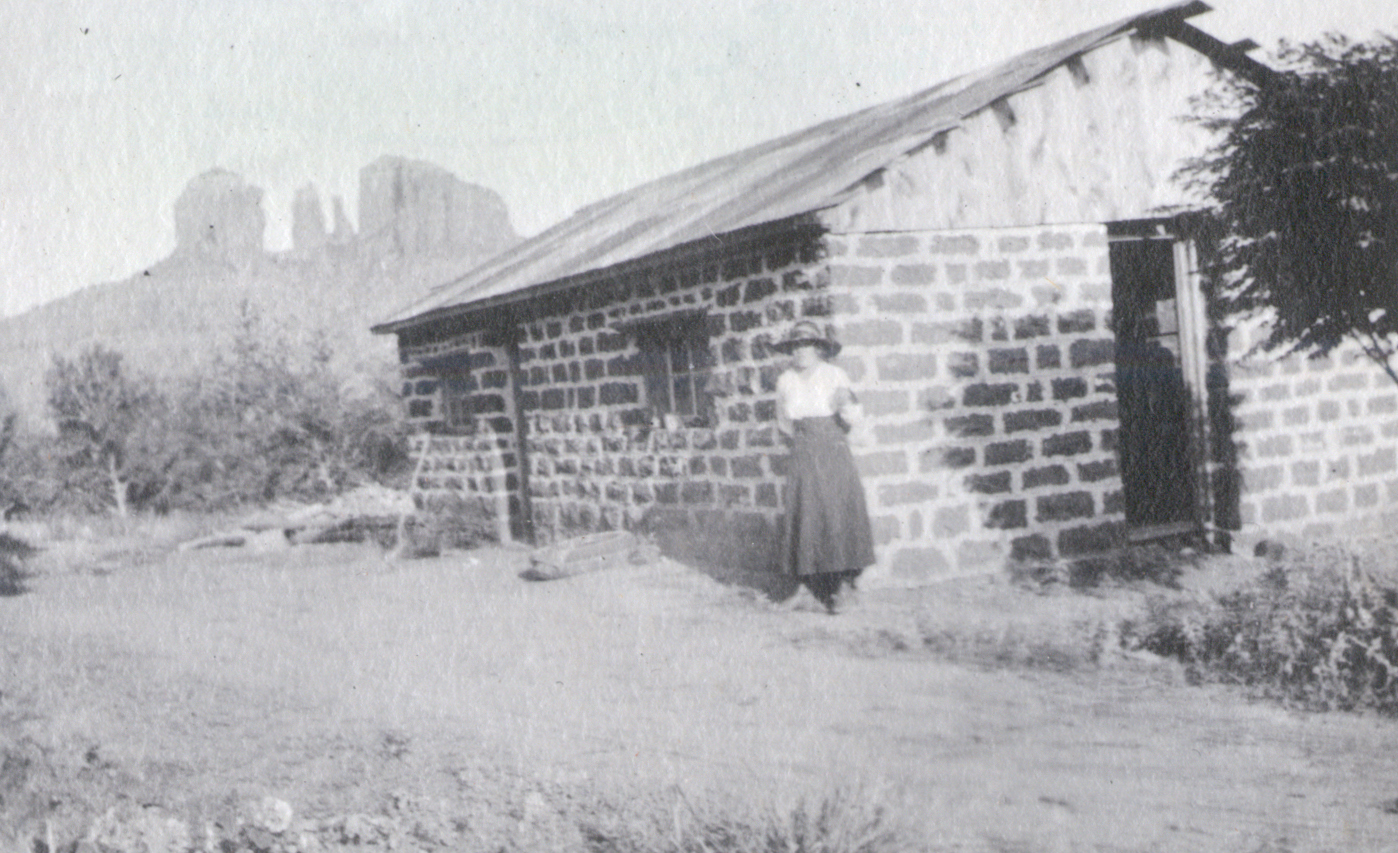 The Henry and Dorette Schuerman family, at Red Rock Crossing area, lost their first home to fire, then re-built using Ã¢â¬ËdressedÃ¢â¬â ¢ red rock bricks. While safe from fire, they unfortunately lost this one to flooding

The Sedona Westerners were treated to a wonderful historical presentation about the Architectural Style of Sedona, The Built Environment, by Janeen Trevillyan, Historian of the Sedona Historical Society and Sedona Museum, at our November monthly meeting.

Slides were accompanied by knowledgeable descriptions illustrating the origin of the Architectural Sedona Style and its development through time.  It all started with caves, tents, logs, sticks, and of course stones.  Before we were even ‘Sedona’ the buildings were of a Folk Style, as were many across America at the time.  Very simple structures with little change over time, usually built by its future inhabitant, handed down within the family, and strongly influenced by geography i.e. using whatever materials were available and close at hand; whatever could be built quickly and certainly not a particular architectural style.

The original Folk Style builders were native Americans who had to adapt to their surroundings.  Montezuma’s Castle is a prime example.  The Europeans in turn imported their own ‘folk’ style and adapted it to the techniques and materials available in their locale.  The canvas from covered wagons was repurposed for tents.  Many of the tent houses were the early version of mobile homes.  The bottom half was wood house, the other half and roof was canvas tent.  When the cattle had to be moved, the ‘house’ was deconstructed, moved to mountain pastures and re-assembled as the family home for the summer.

In the late 1800’s the first homesteaders built log houses at the northern end of Oak Creek Canyon, where the pine trees grew.  Soon they developed extra rooms, and guess what:  decorative stone work.  If you lived near the creek, and your house burned down, stone and rock were welcome alternatives.

With the discovery that our red rock was easily chiseled, came ‘dressed’ bricks.  Nick Kinney and Shorty Newton were local skilled craftsmen who quarried our red rock and were in high demand for their fine masonry work.  Some of the buildings still exist today.

With the spread of the Railroad in the 1860’s and 1870’s, Sedona could obtain building materials fairly easily from great distances.  With this access, log cabins started to be replaced by wooden dwellings constructed with lumber framing and covered by wood sheathing.  While Board and Batten siding became very popular, the shapes of our buildings were still simple rectangles, sometimes with wings and additions.

It wasn’t until after WW II that ‘outsiders’ who relocated to Sedona began to purchase homesteads as their personal getaways or ranchettes.  Hollywood was coming two or three times a year to make movies, and tourism was getting a start.  These newcomers would often bring their own design ideas, importing new styles and elements.

In the US and Sedona, the Contemporary style was favoured in architect-designed houses of the 1950’s to early 1970’s.  This contemporary design avoided traditional forms and details.  Think of the circular building that houses The Raven’s Nest at the corner of Airport Road and 89A.

Howard Madole is considered Sedona’s first architect.  By the 1950’s Mr. Madole was influenced by his exposure to Frank Lloyd Wright’s designs at Taliesin West and began designing very modern residential and commercial buildings.  Huge overhangs, walls of glass and rock fireplaces that penetrated through the glass walls were some of his distinctive design elements.

However, it is Marguerite Brunswig Staude who can be credited with bringing the first seriously modern building to town:  The Chapel of the Holy Cross, built in 1956.  Close your eyes for a moment and picture a tent house, or even a much later log cabin, and now compare it to the chapel.  This was definitely very, very different to what had been seen in Sedona to date.

Since the City incorporated in 1988, they have created a fairly comprehensive set of codes and guidelines that attempt to nudge new construction away from imported styles to modern interpretations of the ‘Sedona Style’.  In 1994, after the local uproar over the use of imitation stone used in the Sinagua Plaza, the City adopted a Design Review Manual that requires the use of natural materials in commercial development.  Today, our codes continue to stress natural materials, integration with the natural landscape as well as environmental friendliness.  Eclectic would be a good term for the greater Sedona’s architecture, past and present; a distinctive look and feel.

Sedona Westerners, written this week by Louise Osborn, taken from the notes of Janeen Trevillyan’s presentation appears every Friday in the Red Rock News.