By Lynn and Ernie Pratt 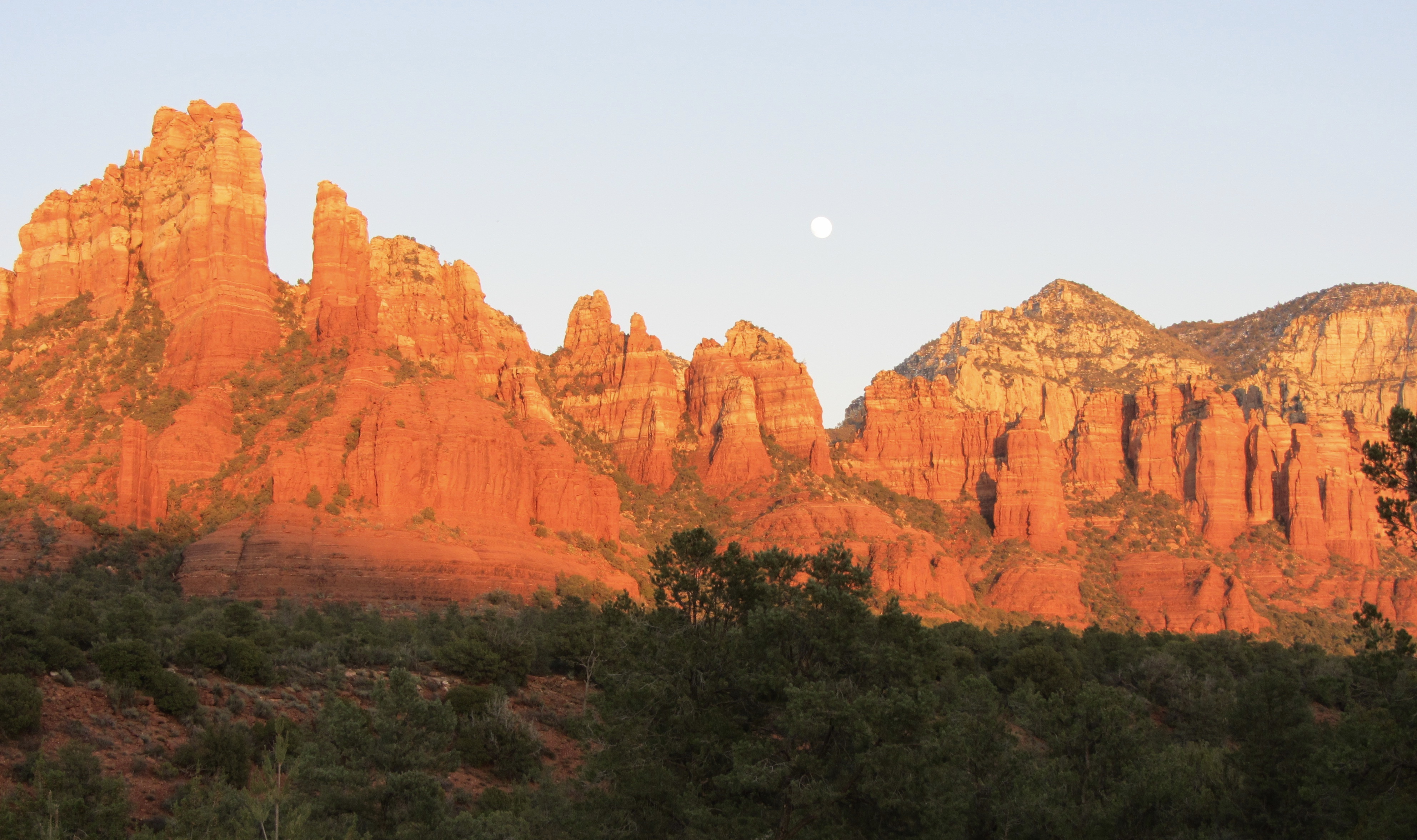 Crimson Cliffs clearly visible from the trail, shown here near sunset, are basking in the sunÃ¢â¬â ¢s rays and positively glowing. It is easy to see why they are called the Crimson Cliffs

Hidden in the Twin Buttes area behind the Chapel of the Holy Cross are a myriad of trails with resplendent, highly varied and ever changing views.  We could see the busy church complex making us appreciate what a great feat of construction it is.  Did you know the chapel was inspired and commissioned by local rancher and sculptor Marguerite Brunswig Staude?  It was built over a period of 18 months at a cost of US$300,000.  The project was completed in 1956.

But the hike awaits!  Under a warm Arizona sun, on a Sunday afternoon, our Westerners Hiking group, the Drovers, set out to explore this complex set of trails.   Starting on the Mystic trail, our leaders Jim Kemper and Bert McLean soon turned their groups right toward a vertical wall on the southwest face of the butte where we saw a roped climber.  Much to our relief he had an alternate route in mind and we began to circle clockwise away from the climbers around the red rock cliff face.  Soon the panorama opened up and we set out in earnest on a challenging route involving the series of Hog trails, eventually arriving slightly winded, at the saddle between the Twin Buttes and Battlement Mesa.  We had climbed steadily upwards - sometimes we were in Heaven, sometimes High and sometimes just Washed up on those Hog trails, but we were capably lead around, up and down and over.  We occasionally met some brave cyclists sharing our trail but it was easy for us to step aside and send them on their way down the dizzying black diamond slick rock paths with lots of verbal encouragement.

After another steep climb, we had a break, while eating homemade cookies with our boots dangling over the edge. Our beautiful day in Sedona was not over and unbelievably it got better.  The long walk around the Twin Buttes trail was a kaleidoscope of views and changing colors with the lowering afternoon sun as we saw Lee Mountain, Munds Mountain, the Crimson Cliffs, Mount Wilson, Thunder Mountain in the distance and Airport Mesa in the foreground.  On the way back to the cars at the Mystic trailhead, our red rock walk turned black as our path crossed a near vertical basalt dike.  The resident geologist and geophysicist were called to account and after a brief and informative talk, the hikers were left with little doubt as to what had happened here.  This geologic feature was one of a series of igneous intrusions caused by ancient volcanic activity in the Sedona area over 12 million years ago (Lindberg, 2006).  Similar associated dikes can also be seen nearby in the Devil’s Dining Room sinkhole on the Broken Arrow trail.  After hiking close to 5 miles and climbing 950 feet we were all pleasantly tired but proud that we had spent our Sunday afternoon being active and being able to share an experience with friends old and new.

Sedona Westerners, written this week by Lynn and Ernie Pratt, appears every Friday in the Red Rock News.