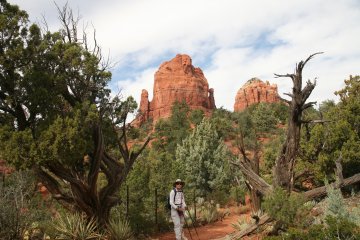 Linda Schermer, scouting part 4 of the Herkenham Sedona Loop, pauses on the Cibola Pass Trail, with Mitten in background

The Sedona Loop hike was conceived by "Father of the Sedona Trail System", the late Norm Herkenham more than 20 years ago. He envisioned connecting existing trails to circumnavigate Sedona. One area lacked a trail, so he worked with the Forest Service to design and build a trail, which they named to honor his work.

The Saturday Rough Riders did the Loop in 3 segments in 2001 and the Sunday Drovers did it in 6 segments in 2003, both as "key exchanges", in which 2 groups start at opposite ends of the route and trade car keys when they meet, so they can access a car at the end of the hike. Liz Sweeney's Tuesday Dogie group did the Loop in 2010 in 5
segments using a shuttle system in which all groups go the same direction and return  in cars pre-positioned at the end of the route. Since it had not been done in years, Linda Schermer, this week's scribe, offered to lead the entire loop if it was offered.  Amiable Ambler Boss, Scott McFeely, eagerly agreed to put it on the schedule.

We started the Loop in early October, assembling at the Scheurman parking lot by the High School. This allowed us a grand view of Cathedral as we started our loop using the Herkenham Trail. We stopped for a snack break on a high red slick rock bluff, forded Oak Creek at Red Rock Crossing, enjoyed lunch by Oak Creek, and ended our hike at the newly expanded Cathedral parking lot.

For the second segment, we started at Cathedral, passed under Highway 179 twice on the HT Trail, snacked on Little Horse Trail, lunched at Chicken Point, viewed the Devil's Dining Room sinkhole, and terminated at Morgan Road.

We began the third segment at Morgan, snacked in Bear Wallow Wash on the Marg's Draw Trail, forded Oak Creek near Midgley Bridge, and enjoyed lunch at a scenic spot on the island there. We then climbed the remainder of Huckaby Trail to end at Midgley parking, and were now half way through our marathon.

The fourth week, we started at Midgley, walked along Wilson Canyon, noted the still remaining foundations for the up-canyon small bridge which preceded Midgley, ambled along Steamboat Rock, passing many beautiful dry waterfalls (an inspiration for Ambler Boss and fine photographer Scott), lunched on the saddle of Cibola Pass Trail, finishing by cautiously viewing the Devil's Kitchen sinkhole at Soldier Pass.

We started the fifth segment at Soldier Pass, walked under Coffee Pot Rock, snacked atop "Salt'n'Pepper", lunched on the saddle by Chimney Rock Trail with a fine view of Sedona town and surroundings, then terminated at Dry Creek Road at the Two Fence Trail.

Our final segment began on the Two Fence Trail, then followed the Girdner Trail which crossed Dry Creek Wash 10 times plus an 11th over a large tributary wash.  After passing the old Sedona dump, we completed our marathon by following Cultural Park Place and crossing Highway 89A to our vehicles at Scheurman parking by the High School.

The Westerners are a volunteer organization and I extend thanks to the co-leaders Scott McFeely, Hassan Hosseini, and Jodie Ball. Thanks also go to tailgaters, Hassan, Scott, and Al Barton, as well to the "early risers", Scott, Hassan, Al, Jean Barton, plus Jodie, who arrived at 8:30 over the weeks, at the end point for the day's hike, where we left shuttle cars in place before car-pooling to Posse Grounds for our 9 a.m. sign in.

Ambler Boss Scott McFeely and all the friendly Ambler hikers welcome you to join in our adventures!  If you are interested in joining the club, visit the Sedona Westerners at www.sedonawesterners.org or just come to one of our monthly meetings. The next one will be on Thursday, January 12, 2017 at 7 p.m. at Saint John Vianney Parish, 180 St. John Vianney Lane in Sedona.