Tea Cup Hike to Base of Coffee Pot Rock

By Tim and Heidi Anderson 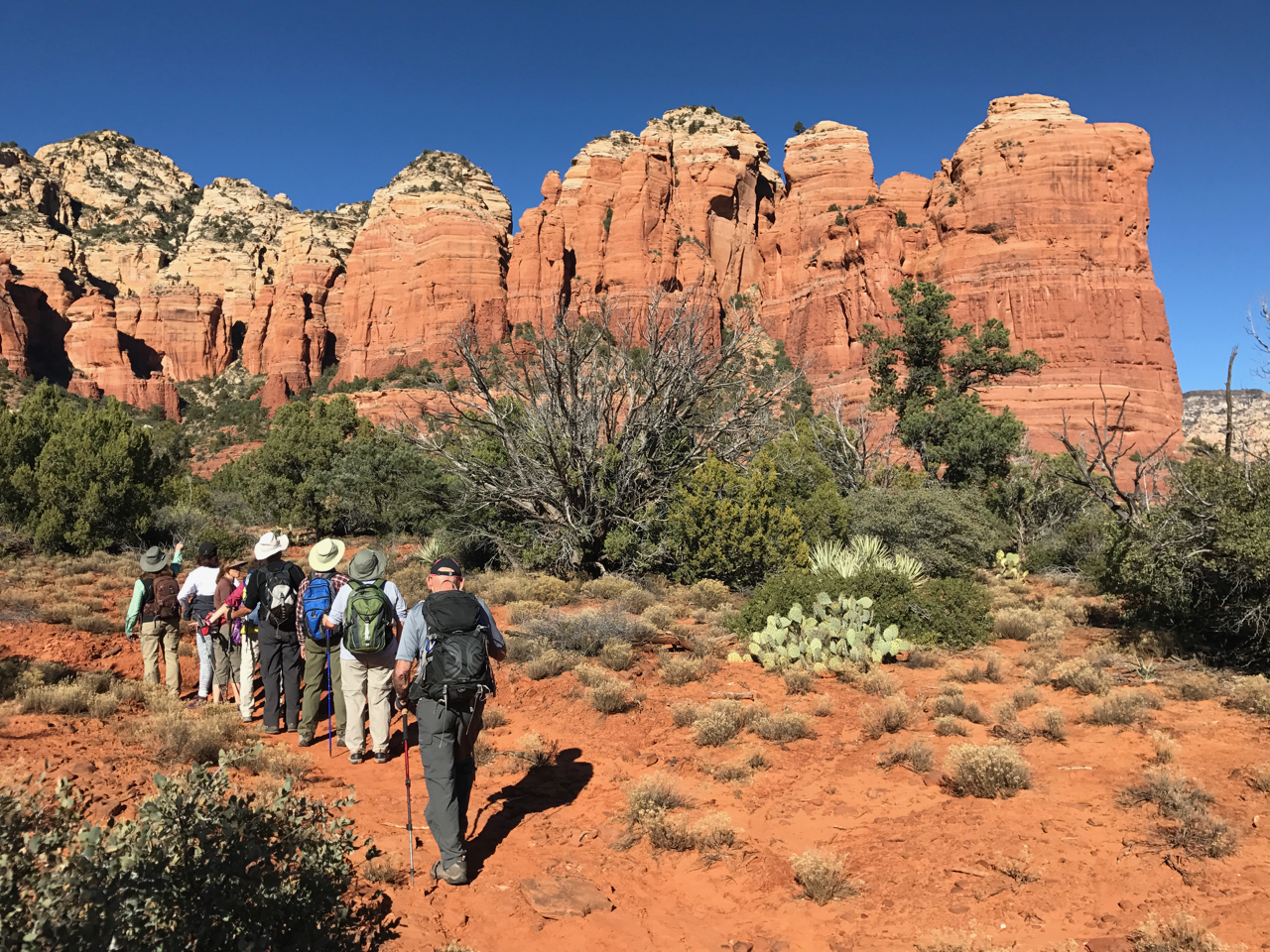 On the beautiful clear-blue sky afternoon of December 4, the Drovers hiking group of Sedona Westerners gathered at Posse Grounds parking lot in preparation for a hike on the Teacup Trail. Teacup is a unique hike in that it is close to Sedona homes wi

On the beautiful clear-blue sky afternoon of December 4, the Drovers hiking group of Sedona Westerners gathered at Posse Grounds parking lot in preparation for a hike on the Teacup Trail. Teacup is a unique hike in that it is close to Sedona homes within the community yet takes the hiker into beautiful red rock areas and up onto a ledge below a Sedona landmark formation, Coffee Pot Rock. Coffee Pot is visible from West Sedona and resembles a percolator-type coffee pot, complete with spout.

The hike is a relatively easy 3-mile round-trip journey with an approximate 330 feet elevation gain. We started at the common trailhead for Sugar Loaf Loop and Tea Cup Trail, off Little Elf Road. Our leaders Tony Paunicka and Dave Kieres, led our group of hikers to the base of Coffee Pot in a 70-minute trek traversing Tea Cup, Middle Tea Cup, and Skidmark Trail.

There are several enjoyable memories from our hike. Walking through innumerable types of native vegetation, the flora included agave, cacti, juniper, Mormon tea, ocotillo, and yucca; hiking amongst large flats of red rocks with red rock formations looming 1000 feet over our heads. But the most memorable was the 45 minutes we spent on a wide, red rock ledge on the Skidmark Trail at the base of Coffee Pot Rock.

Time relaxing on this ledge was our reward for the trek we’d taken up to the base of Coffee Pot. The most remarkable aspect of this ledge, with Coffee Pot looming 800 feet directly above us, was the wide 180o view from which we could see at least a dozen Sedona landmarks. As we sat on the ledge basking in the warm sunshine enjoying our water and snacks we could see, from west to east, the Mingus Mountains, Chimney Rock, Sugarloaf Mountain, Airport Mesa, Cathedral Rock, Courthouse Butte, Twin Buttes, Submarine Rock, Munds Mountain, the backside of Mitten Ridge, Snoopy Rock, Steamboat Rock, Ship Rock (also known as the Fin), and even the sink hole at Devil’s Kitchen.

As we reluctantly left this beautiful sunny viewpoint for the return hike, our attention was caught by several rock climbers that were scaling one of the large rock spires adjacent to Coffee Pot. We admired their skill, and daring, as they utilized ropes to climb approximately 800 feet to the top of this narrow pinnacle. Retracing our steps to the trailhead was only a 40-minute trek. We experienced a wonderful Sunday afternoon enjoying scenery and conversation with several Westerner friends, both old and new.

If you are interested in joining the club, visit the Sedona Westerners at Sedonawesterners.org or just come to one of our monthly meetings. The next one will be February 9th, at 7 pm at St. John Vianney Parish, 180 St. John Vianney Lane, in Sedona.

Sedona Westerners, written this week by Tim and Heidi Anderson, appears every Friday in the Sedona Red Rock News.