The Amblers Hike The Grand Canyon 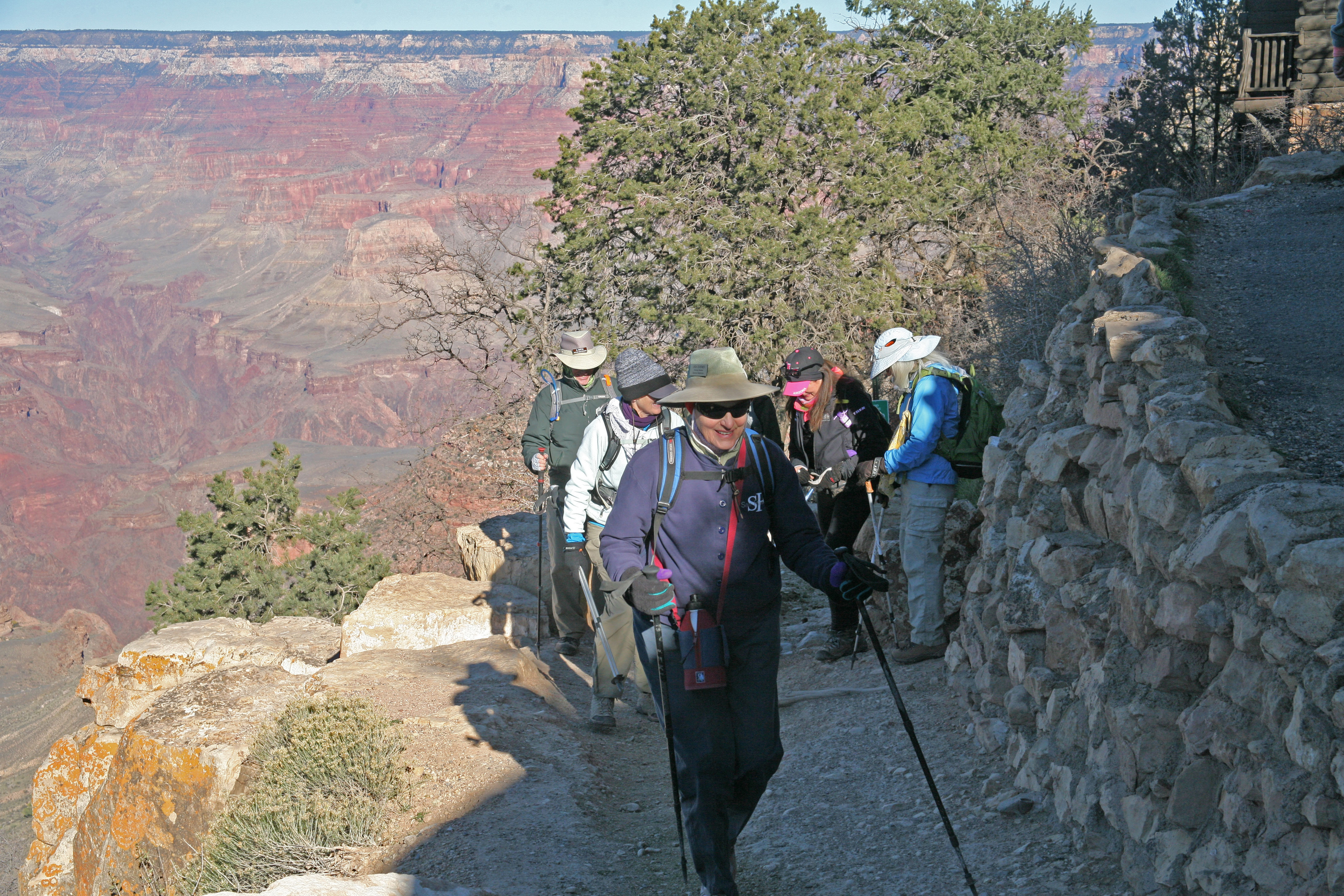 And with the magnificent beauty of the canyon behind them, the Amblers, Linda Schermer in the lead, finish their challenge to Mile-and-a-Half Resthouse and back.

The Amblers, led by Jan Taylor with Hassan Hosseini tailgating, ventured to the South Rim of the Grand Canyon before the snows, for an atypical outing.  Generally, the elevation gain on the hikes of this group is only a few hundred feet with the distance being less than 5 miles.  But, on this hike the target was the Mile-and-a-Half Resthouse with the objective being to better understand the uniqueness of the geology of the canyon.  As we hiked the Bright Angel Trail we observed multiple rock layers exposed through the work of the Colorado River and the uplifts that have occurred over the course of millions of years.

A down side of hiking the Bright Angel Trail during late fall and early winter is that the upper part of the trail is almost always in the shadow of the rim above.  Thus, a trail that can be extremely hot in the summer months is the antithesis of that during the winter months.  In fact, we were only in the sun when traversing one switchback that took us fairly far to the west.

Before we started down the trail the considerable work that has been done to rebuild the trailhead area was noted.  As we began our descent the Kolb Studio stood in front of us.  Our leader pointed out the window near the top of the structure where the Kolb brothers once photographed passing tourists.  They would then process and produce prints to sell to the tourists on their return from the depths of the Canyon.  While time didn’t permit the group to be in the studio for more than a few minutes, those with an interest in the history of this building and its occupants should plan a visit during December, January or February when tours are offered each day at 2:00 PM.  No more than 15 people are taken on the daily tour of the residential quarters.  To have this opportunity you must call 928 638-2771 on the morning you wish to attend.

Continuing down the trail we passed through the first tunnel.  Immediately after passing through it the red pictographs were visible above us on our left.   These paintings are in the Kaibab formation.  We continued down the trail passing through the second tunnel where our hike leader paused for a short geology talk.  The bright sunshine on the wall of the canyon to the west made the Coconino layer stand out prominently.

Ralph Cameron is credited with building or expanding the two tunnels which were made large enough to accommodate a mule and rider.  Historically, the Bright Angel Trail was a natural trail used by wildlife and subsequently by Native Americans, namely the Havasupai, to reach Indian Gardens where they could cultivate crops.  Mr. Cameron actually owned the Bright Angel Trail from the late 1800s until 1928.

Down below the trail opens up after a total of about 4 miles as the softer rock layer (the Bright Angel Shale) erodes down and forms a significant plateau where upon Indian Gardens is perched with a year-round flowing stream that irrigates at that level.  It is in this area that Native Americans grew crops and presumably prospered.  But, for our group that was not our destination, only a site in the distance to be the target of a future outing.  On this day, the Amblers took a long break at the Mile-and-a-Half Resthouse while our hike leader further explained the wonder of the geology that surrounded us and then the well-rested group headed back up the trail.  Without any recent rain or snow the trail was in excellent shape so our only challenge was the steepness of the trail and the thinner air as we approached an elevation of 7000’.  We all took our time and made it to the top in good shape but somewhat spread out based on our own comfort level.

If you are interested in joining the club, visit the Sedona Westerners at www.sedonawesterners.org or just come to one of our monthly meetings. The next one will be on Thursday, March 9, 2017 at 7 p.m. at Saint John Vianney Parish, 180 St. John Vianney Lane in Sedona.