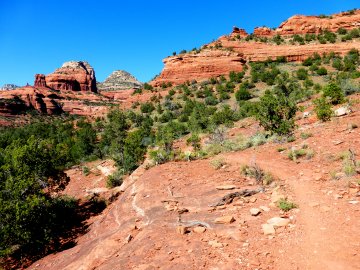 The Mescal Trail Beckons: Taken on the Western side of Mescal with a view toward the entrance to Boynton Canyon. The dark red formation on the left is just above "Kachina Woman"

Situated between the entrances to Boynton and Long Canyons, is Mescal Mountain, an impressive hiking area in its own right. This was the recent destination of the Dogies, one of the hiking groups which make up the Sedona Westerners.

The day was clear and the temperatures were ideal as we set out from the parking lot via the Long Canyon Trail, traversing nearly level terrain on the approach to the mountain. The gentle approach provided ample opportunity to appreciate the changing face of the mountain, which has three distinct arms, forming a "Y" configuration when viewed on a map. It also provided glimpses of the surrounding terrain with views of the Grassy Knolls to the East and the towering cliffs faces of the Secret Mountain Wilderness to the North.

Soon the level terrain gave way to the mountain, where we paused to remove layers of clothing, knowing increasing temperatures would soon make the brisk morning air nothing but a memory. Continuing on, the trail passed through manzanita, prickly pear, agave and yucca, providing occasional views of Thunder Mountain to the South, Lost Wilson Mountain to the East, into the depths of Long Canyon to the North and of the spire known as Kachina Woman at the entrance to Boynton Canyon, to the West.

Closer in the views were equally compelling: in rapid succession, we experienced sheer red rock cliff faces, some topped with spires, and areas of dense vegetation, rocky promontories, narrow saddles, dark crevices and expansive sections of slick rock. Each arm of the mountain had its own unique character and all of them were beautiful. Reaching our destination, the group paused to rest, and to enjoy each other's company and absorb the vistas stretching away in all directions.

Refreshed by our break at the turnaround point, we were soon retracing our steps, providing a whole new perspective on the ground covered earlier. As we followed the Mescal trail around the mountain, we marveled at the abundance of ocotillos dotting the south facing rocky slopes. The healthy population of ocotillos seems to indicate the presence of an ideal environment, as this is one of the better stands of these plants in the area. We also enjoyed passing under the sheer cliffs, pockmarked with everything from tiny holes to large alcoves. Eventually, the trail led away from the mountain and back across the undulating terrain to the parking lot. We arrived satisfied with all we had seen and experienced on our visit to Mescal Mountain.

If you are interested in joining the club, visit the Sedona Westerners at www.sedonawesterners.org or just come to one of our monthly meetings. The next one will be on Thursday, March 9, 2017 at 7 p.m. at Saint John Vianney Parish, 180 St. John Vianney Lane in Sedona.