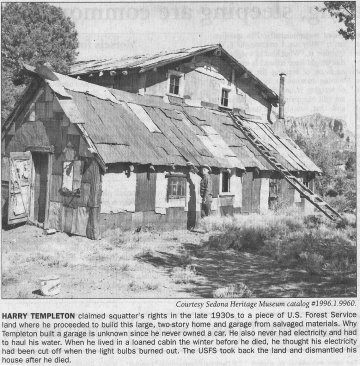 Anticipating another exhilarating Sunday afternoon hike with the Sedona Westerners Drovers, we awoke to clouds and a steady rain.  Most of the Drover hikers checked our favored weather forecast site and were encouraged that the rain would give way to a clear Sunday afternoon.  So as the appointed rendezvous time drew near, stuffed our packs with rain protective gear, and drove to the designated gathering point in the Village.  We then carpooled to the trailhead and noticed very dark foreboding clouds in the direction our hike would take us.

Our hike leaders for the day were Bob Dannert and Cathy Lutz, both experienced Westerners.  Although the hike was named “Slim Shady”, our leaders explained that the hike would be a loop consisting of the Templeton, Easy Breezy, HT, Slim Shady and Kaibab trails. Before beginning the hike our hike leaders gave us a brief history lesson on the origins of the naming of two of our trails – HT and Templeton.

Harry Templeton (1880-1968) for whom the trails were named supposedly arrived in Sedona in the 1930s and lived on public land in Oak Creek – you could do that back then.  In the 1940s, according to the records of the Sedona Historical Museum, the United States Forest Service (USFS) asked Harry to move and issued him a Special Use Permit for land east of Cathedral Rock where he lived and ranched but never homesteaded.  After his death in 1968, his ramshackled house was removed although portions of the tin from the house can still be seen from the Templeton trail. One of the anecdotes about Harry Templeton was that he built a garage but the story goes that he never had a car.  This just proves that a garage is a necessity of life for guys regardless of the number of cars he may own!

About halfway through the hike our eagle-eyed Drovers spotted the scattered tin remains of Harry’s cabin and garage.  We each tipped our hiking hats to Harry for his persistence in clawing out a living in the harsh desert below Cathedral Rock without electricity or running water.

Further along the trail, the remains of long forgotten cars or trucks were spotted in a wash by the trail.  We then entertained ourselves by trying to identify the make, model and year of the vehicles (from the scant rusted metal that remains).  Since at most we had only part of a rusted hood, this made for some wild speculations.  The most imaginative was that from an unnamed hiker who swore that the vehicle was a 1930s Mitsubishi truck.

Leaving our fun, we noticed that the clouds had become even darker and threatening, so we hastened our steps back the remaining mile or so to complete our loop and return to the Yavapai Vista parking lot.  With thunder and lightning greeting us we made quick work of the last mile.  As we neared our cars it began to drizzle but most of us reached our car before the heavens opened up and it began to pour.  The hike was nearly 5 miles with little elevation gain and all Drovers agreed this had been a rewarding way to spend a Sunday afternoon.

If you are interested in joining the club, visit the Sedona Westerners at sedonawesterners.org/membership.  We invite you to attend our monthly meetings:  Next one will be on Thursday, April 6, 2017 at 7 p.m. at Saint John Vianney Parish, 180 St. John Vianney Lane in Sedona.