The Westerners Went over the Mountain 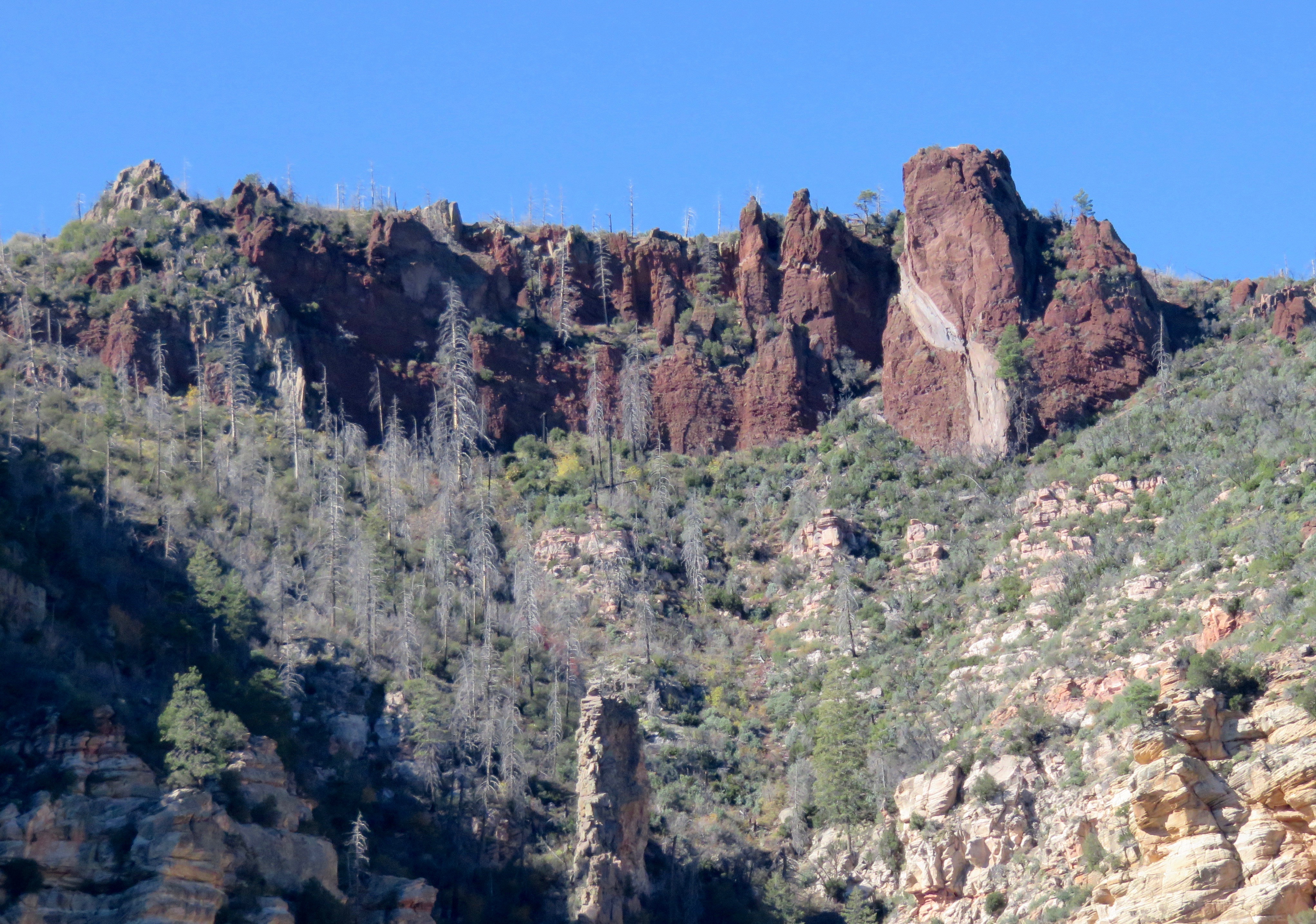 Taken from North Wilson on the first bench, looking west towards the summit of Wilson. The Cinder Cone contains the feeder dike, i.e. the large grey band on the right.

As is the Sedona Westerners custom we were met by our hike boss and given the trail rules as the Dogies prepared to hike up the South Wilson Mountain trail to the First Bench and down the North Wilson trail.  Our first problem was to work out the car shuttle between the two parking lots at Midgley Bridge and the Encinoso Park.  But as usual that did not quite work out, proving once again a collective group of mature minds does not necessarily add up to one with the right answer.  The result was we got on the trail a little late but all was well in the end.

It was a clear sunny day, the first following 3 days of rain.  As we started up the trail there was some trepidation over the trail conditions we might encounter especially when hiking through the volcanics.   The volcanics in our experience tend to stick to our boots much more so than the more commonly eroded sandstones of Sedona trails.  Unfazed we plodded onwards and upwards and did indeed encounter some of that sticky mud along the way.

Mount Wilson, is tallest of our surrounding peaks and was named after Richard Wilson who was a bear hunter, killed by a grizzly in 1885.  His body was found in Wilson canyon, not far from the grizzly that killed him.  Locals were clear on that point.  Mr. Wilson’s knife was found in what remained of the bear.

Two thirds of the way up the mountain we stopped to study and discuss a peculiar rock found on the side of the trail.  It was a large piece of pyroclastic volcanic that just did not belong there.  It was most likely a volcanic bomb that was ejected from the cinder cone 1/2 mile away.

At last we reached the top of the First Bench, slightly winded and hungry.  We found a good spot for lunch right on top of the Oak Creek fault, which sometime in the last 6 million years had faulted down 830 feet from the top of the mountain.  While eating we could look back down the trail over full views of the sedimentary section including the Schnebly Hill Formation and Coconino Sandstone that make up our Sedona area mountain walls.  Fortunately, there was no movement on the fault that day and we ate our lunch safely topped off by fresh baked cookies.   The trail upwards had been somewhat better than expected but now on the flat-topped bench the trail was very wet with flowing water and accompanying mud.  We were careful to keep our boots dry, while mindful that we did not damage the trail as we walked.

About a ½ hour down the trail we came to a beautiful overlook of Oak Creek canyon.  From here we could look upward to the faulted cinder cone and feeder dike that formed the top of Wilson Mountain.  We could also easily see both sides of the canyon, noting the different geology and the height of walls east to west.  We discussed differences and the processes needed to form the present day geological picture. Now a little smarter, we descended the North Wilson trail.  This part of the trail is very different ecologically from our ascent.  Upwards we walked carefully through a Pinyon-Juniper belt with accompanying cacti and yucca; passing downwards we entered into a shady Oak and Pine forest giving some relief to our sweaty bodies.  We finished the hike walking through the 2006 fire damaged forest that appears to be recovering nicely.

The hike, capably lead by Ernie and Lynn Pratt, was 5.5 miles while climbing a total of 1770 feet.  The sweepers, Jim Warren and Dave Vanderwater made their final hiker count and everyone was accounted for, which is always a good thing.  Happy, and tired after the exercise and a little better informed on the area geology, we drove back to Sedona.

If you are interested in joining the club, visit the Sedona Westerners at sedonawesterners.org/membership.  We invite you to attend our monthly meetings:  next one will be on Thursday, April 6, 2017 at 7 p.m. at Saint John Vianney Parish, 180 St. John Vianney Lane in Sedona.