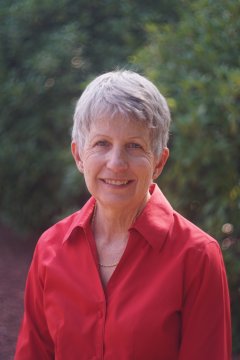 Barbara was born and raised in Lansing, Michigan.  She graduated from Kutztown University in Kutztown, Pennsylvania with a degree in Secondary Education and Mathematics.  Initially she taught mathematics at the middle school level, but after a few years, she switched to the Information Technology (IT) career field.  She had studied Computer Science along the way to her degree in Secondary Education and later earned Microsoft certifications.  This enabled her to teach software and mathematics at ITT technical institute.  She then progressed to being a trainer at a software consulting firm.  Her IT career culminated when she worked as an independent contractor for a pharmaceutical company where she was responsible for all aspects of its hardware and software, until she retired in 2008.

She is married to Kevin O’Connor, who is an electrical engineer and who worked at Bell Laboratories until he retired in 2001 and became an independent consultant.  He continues to work as a consultant, mostly with medical devices.  The O’Connors and their two children lived for about fifteen years in Allentown, Pennsylvania and about fifteen years near Clinton, New Jersey, prior to retiring to Sedona, Arizona.

The O’Connors’ love affair with the Western United States began in 1974 when they drove cross country to Palo Alto, California, where Kevin earned his Master’s Degree at Stanford.  This initial liking of what the West has to offer was strongly reinforced in May 2007 when they took a vacation in Arizona to visit Phoenix, Canyon de Chelly, Monument Valley, the Navajo National Monument, and Sedona.  Like so many people that come to Sedona, they fell in love with its scenic beauty, moderate climate, and outdoor recreation opportunities.  They decided to retire to Sedona and a year after this vacation, they bought a house in the Village of Oak Creek and moved here from back East.

Barbara and Kevin joined the Sedona Westerners in 2008.  Their next-door neighbor was already a member and encouraged them as hikers to join the club.  It seemed a natural fit for them and they liked the way the Westerners get you to places you might not get to if you were hiking on your own.  Barbara became more involved with the club over the years and has held several of the officer positions.  In 2010/2011, she served as Roundup Boss, which is the publicity person who works with the Red Rock News to publish an article about the Westerners each week.  In hiking year 2012/2013, she was the Mustang boss, followed by the years 2013/2014 and 2014/2015, in which she served as the Prospector, who is the officer responsible for membership.  In 2015/2016, she served as the Assistant Cactus Dodger Boss, which is the person responsible for assisting in the coordination of the Roughrider hikes every Saturday.  In hiking year 2016/2017, she served as the Wagon Boss, who is responsible for the program speakers at the Westerners’ monthly meetings.  All of these positions are volunteer positions; there are no paid positions in the club.  Finally, for hiking year 2017/2018, she is stepping up to be the Trail Boss, the president of the club, as justified by her in-depth experience and proven competence with the Westerners during the past nine years.

When asked what she particularly likes about hiking with the Westerners, Barbara responded that you meet amazing people from all over the United States and from foreign countries.  Furthermore, she said they have great stories to tell and that has particularly appealed to her throughout the years she has been hiking with the Westerners.  Please join us in welcoming Barbara O’Connor as this year’s Trail Boss!

If you are interested in joining the club, please visit the Sedona Westerners website at www.sedonawesterners.org/membership.  You are invited to our next monthly meeting at 7:00 p.m., Thursday, November 9th, at the Sedona Methodist Church, 110 Indian Cliffs Road.  The Sedona Westerners column, written this week by Jeff Fargo, appears every Friday in the Sedona Red Rock News.