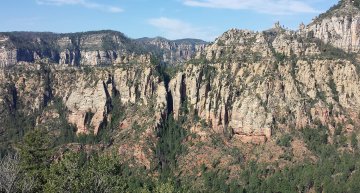 : View of the west side of Oak Creek Canyon taken while hiking along the east rim of the Canyon. This view is opposite the Harding Springs trail. The Ã¢â¬ÅBaby CarriageÃ¢â¬Â rock formation can be seen in the upper right portion of the photo

The weather was predicted to be in the low 90’s, so the Sedona Westerners’ Dogie hiking group planned to hike from Harding Springs trail to Cookstove trail in Oak Creek Canyon, which is always cooler than Sedona.  This is known to be a shady hike that goes to the Mogollon Rim above Oak Creek Canyon.

The hiking group met at 8:00 a.m. at Posse Grounds Park in West Sedona.  This was the second Dogie hike of the season, but for many, it was the first time they had hiked with the group since View of the west side of Oak Creek Canyon taken while hiking along the east rim of the Canyon.  This view is opposite the Harding Springs trail.  The “Baby Carriage” rock formation can be seen in the upper right portion of the photothe last season ended in May.  There were warm greetings and introductions of some new members.  People soon talked about their summer adventures and how happy they were to be back for another hiking season in Sedona.

The hikers carpooled about eleven miles north on State Route 89A through Oak Creek Canyon and parked at the Cave Springs Campground, which is across the road from the trailhead.  The sun was low and still behind the east rim of the Canyon, illuminating the upper portions of the western ridge and rim.  This left the eastern ridge and the Harding Springs trail cool and in the shade.   The trail was primarily through a Ponderosa Pine forest with rock outcroppings of white Coconino Sandstone.  For the first few minutes of the hike, we saw lots of poison ivy on the side of the trail.  Since many of us were wearing shorts, we were concerned; however, the trail was wide and well-maintained, so the poison ivy was easy to avoid.  As our group hiked up the steep trail, the Ponderosa Pines were interspersed with dwarf Gambel Oak trees and Alligator Junipers, along with some yuccas bearing fruit.  In some places with fat Ponderosa tree trunks, the air smelled sweet, almost like butterscotch.

The hike leaders took several breaks as we made our way up the 1000-foot elevation gain to the Mogollon Rim. When we got there, we took in the spectacular views of Oak Creek Canyon to the north and south.  At one point during our hike between the two trails, we had a clear view of the rock formation on the western side known as the “Baby Carriage.”  The Rim of the Canyon had fewer shade trees, so we took advantage of the many shady spots for water breaks.  Our group stopped for lunch at the scenic overlook above Cookstove Canyon.  There were lots of limestone rocks scattered about in a shady area, which made nice places to sit and eat.  One of the hikers told the story of how Cookstove Canyon got its name.  According to the story, one of the original pioneers (Purtymun or Thompson) took a trip from Sedona to Flagstaff to purchase a cast iron cookstove.  The cookstove was loaded onto a horse-drawn wagon to transport it back to Sedona, but on the way back the wagon hit a rock, tipping it and dumping the cookstove into its namesake canyon.

During the steep hike downslope to the floor of Oak Creek Canyon, we had some cloud cover, which kept the temperature reasonably comfortable. Our hike took three and a half hours, covered 4.2 miles, and achieved an 1100-foot cumulative elevation gain.  The highest elevation we reached was 6,400 feet.  It was quite an enjoyable hike for a hot September day.

If you are interested in joining the club, visit the Sedona Westerners at www.sedonawesterners.org/membership.  You are invited to our next monthly meeting, at 7:00 p.m. on Thursday, November 9th, at the Sedona United Methodist Church, 110 Indian Cliffs Rd.  Sedona Westerners, written this week by Tom Yager, appears every Friday in the Sedona Red Rock news.