Hiking on the Schuerman-Pyramid-Herkenham Circuit 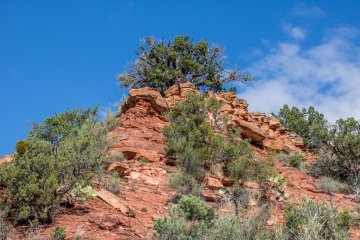 The Scorpion trailhead starts at the Chavez Ranch Road and Upper Red Rock Loop Road juncture. With promises of a newly discovered 115-room pre-ruin site at the midway point, the intrepid Thursday hikers started off led by Mary McCaffrey. No sooner were we beyond the Ocotillos at the beginning of the Scorpion trail (named after the Sedona High School mascot), than we veered off to the left and began the ascent to the top of the first pyramid.  Fortunately, the weather cooperated with less than 90-degree temperatures and we didn’t expend too much sweat to get to the top.  Our tailgater, John Freeman, made sure all hikers reached the summit.  After a little bit of early exhaustion, we enjoyed spectacular views, particularly south to Cathedral Rock, Bell Rock and Courthouse Butte.

Then, like a well-executed hand-off of the baton in a relay race, Mary turned the leadership of the hike over to her co-leader, Michael McCaffrey. This section of the trail was teeming with fully ripened prickly pear fruit.  Michael inquired as to who in the group hadn’t tasted the fruit. There were a few who hadn’t, so Michael stripped one of the pieces of fruit and with two flat rocks proceeded to rub the needles off the outer casing and peeled the covering to reveal the red fleshy fruit inside. It was a sweet, juicy, and seedy treat for a few adventurous hikers.

The trail hugged the flank of Schuerman Mountain all the way to the boundary with Sedona High School.  We continued across Upper Red Rock Road and halted at the Herkenham-Skywalker trail junction. Here Michael informed us that we would be taking a small detour to view the 115-room pre-ruin site, locally known as the Marri-ott Quartllard. It was a short trek along the Skywalker and Over Easy trails to the site.  Entering the atrium, all were amazed at the artifacts and wall paintings.  One might wonder what remains there would be if we could visit the area in 2917. After a brief respite for photos by the sculpture, “Man Descending the Sphere to Retrieve Equipment,” we retraced our steps back to the Herkenham Trail to resume the rest of the hike.

On a sad note, we had been promised a watermelon treat at the next break, but as we came to find out, the leaders had left the treat in their fridge at home. There was much grumbling and threats of mutiny, so the hike continued with some disgruntled, mouth-watering folks.

The Herkenham trail ends at the Old Post trail, a former mail route from the horse and buggy era, and from there we had a pleasant jaunt to Chavez Ranch Road and reconnected with our cars.

The trails in this part of the world are a real treat and we are fortunate to have such well-developed trails. Special thanks should be given to the Forest Service and the Biking Community for their efforts in establishing these trails and opening them to everyone.

The Mustangs hike every Thursday and they typically hike seven to nine miles with an elevation gain of 1000 to 2000 feet.  This hike was 5.2 miles with 723 feet of cumulative elevation gain. We hope to see you all out there with us soon.

If you are interested in joining the club, please visit the Sedona Westerners website at www.sedonawesterners.org/membership.  You are invited to our next monthly meeting at 7 p.m., Thursday, November 9, at the Sedona Methodist Church, 110 Indian Cliffs Road.  Sedona Westerners, written this week by Michael McCaffrey, appears every Friday in the Sedona Red Rock News.