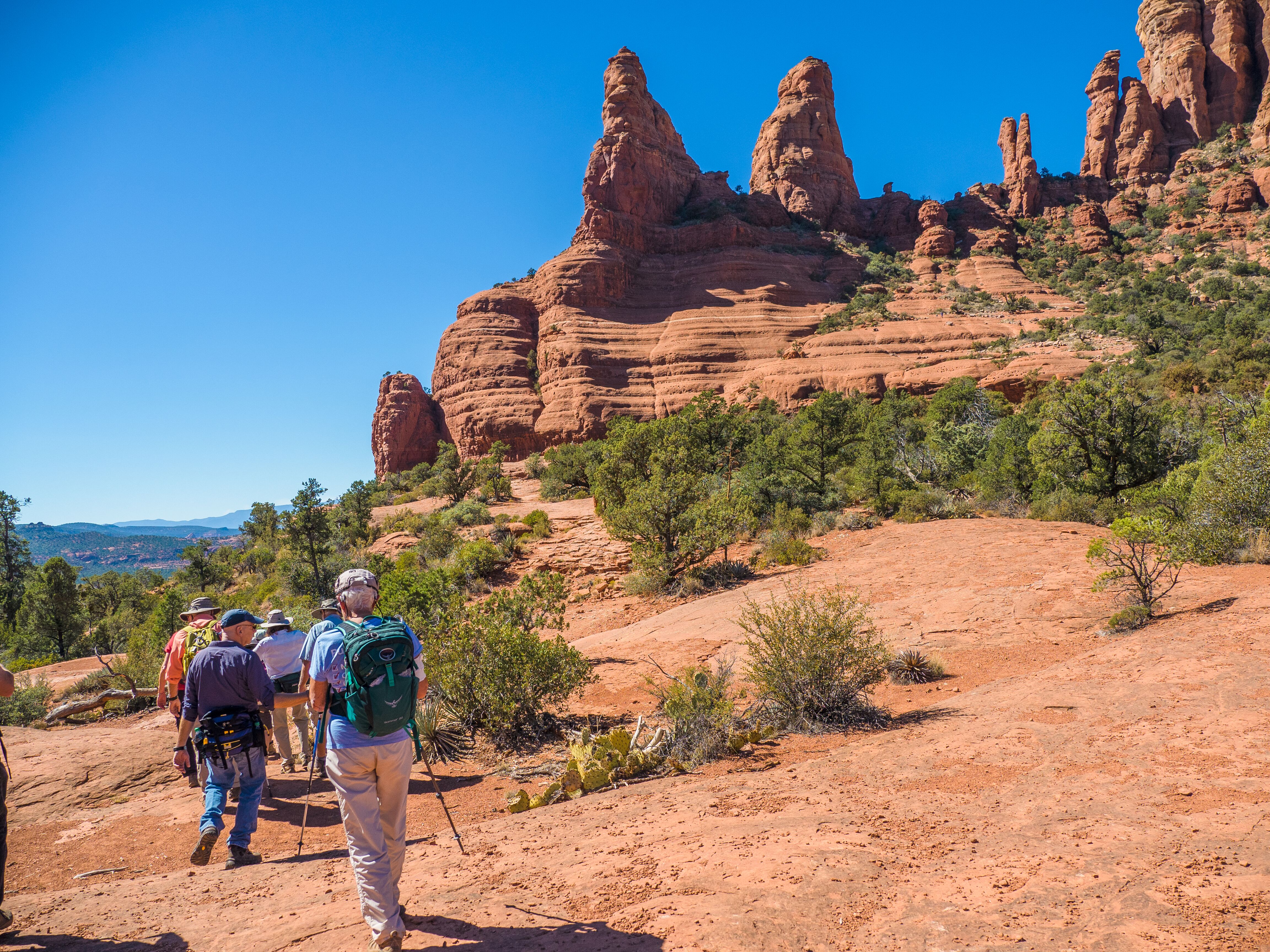 What’s in a name anyway?  In doing a little research for this article, I found out that there are many names for the numerous trails, canyons, mountains, and rock formations around Sedona.  Some of them even have multiple names, depending on who is talking or writing about them.

Many rock formations are named based on their appearance. Examples are: Coffee Pot Rock, Snoopy Rock, Submarine Rock, Chimney Rock, Gibraltar Rock, Cibola Mittens, and Cockscomb.  However, for some you must use your imagination more than for others.  Examples of those harder to visualize are: Sugarloaf, Madonna and Child, Mayan Maiden, City Hall, Kodak Camera, and Courthouse Butte.

So, who was Jim Bryant in that a trail and a canyon were named for him?  Jim hiked and led many hikes for the Westerners in the 1970s and 1980s.  He was described as very humble, energetic and enthusiastic, well-respected for his physical prowess, and a great ambassador for the Sedona Westerners.  Jim and a friend, Hazel Lytle, were exploring the area near Chicken Point when they came across the remnants of a Civilian Conservation Corps (CCC)-established trail.  Much of it was overgrown and had nearly disappeared, but the Westerners adopted it, and hiked it occasionally.  It became known as the Jim Bryant trail.

Now that we have established a little of the history about this trail, let’s describe today’s hike.  Our Westerner group, the Dogies, carpooled from both Sedona and the Village of Oak Creek meeting areas to the Little Horse trailhead on SR179.  The hikers were split evenly into two groups.  Dianne Luce led and Liz Sweeny tailgated the first group.  Jim Kemper led and Dave Vanderwater tailgated the second group.  It was a beautiful sunny day with temperatures in the 70s and low 80s.

This hike starts out on the Bell Rock Pathway for a short distance and then uses the Little Horse trail.  It passes the Llama trail, as well as the Chapel trail, which leads to the Chapel of the Holy Cross.  It joins the Jim Bryant trail just below Chicken Point, which is a destination of many Jeep tours. Many of the rock formations noted earlier in this article were visible during our hike.  We made periodic rest stops and enjoyed the magnificent views of the area.

We took our mid-morning break in a drainage surrounded by Arizona Cypress, Sycamore, and Oak trees.  Manzanita, Sugar Sumac, and Broom Snakeweed were abundant in the area as well. We then followed our leaders for about another hour to a lunch spot along a hillside that took advantage of stunning views of red rock columns and heavily-wooded rocky slopes.  After lunch, we retraced our steps, having spent about 4 hours, having covered about 6 miles, and having gained about 1,000 feet of cumulative elevation gain.  Upon completing the hike, we all gave our leaders “high fives,” for inspiring us with such a wonderful hike.

If you are interested in joining the club, please visit the Sedona Westerners website at www.sedonawesterners.org/membership.  You are invited to our next monthly meeting at 7 p.m., Thursday, November 9, at the Sedona Methodist Church, 110 Indian Cliffs Road.  Sedona Westerners, written this week by Len Ostrom, appears every Friday in the Sedona Red Rock News.