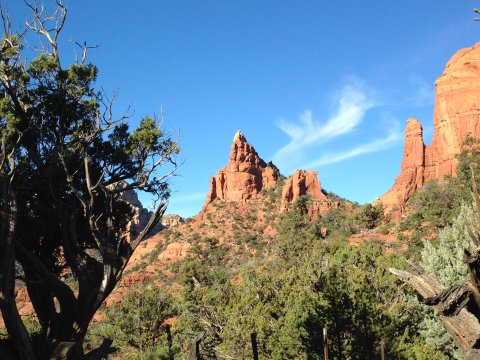 View from the Cibola Trail toward the closest red rock formations. The Sphinx and the Cibola Mitten can be clearly seen from here. Pinon Pine and Juniper dominate the landscape. Photo by Jeff Fargo

Recently, the Sedona Westerners Amblers hiking group hiked a two-mile loop consisting of the Jordan and Cibola Trails, which we accessed from Jordan Road trailhead.

Three groups of hikers took part, with the hike leader being Pam Smith, the co-leaders were Jodie Ball and Kristi McLean, and the tailgaters were Hassan Hosseini, Al Barton, and Annette Thrawl.  This is my third year participating in the Sedona Westerners hiking club and I’ve made many friends in the group throughout this time.

It was a beautiful 60-degree Thursday morning and both hikers and mountain bikers were out enjoying the trails.  Once we were on the trail, we took breaks for clothing adjustments as the weather warmed up, as well as taking time out for capturing photos of the beautiful scenery around us.

There were a few newcomers on the hike, who were curious about all the rock formations around us, and several people pointed them out and told them their names.  Because the trail ascended and descended frequently, there were lots of opportunities to see all the surrounding red rock formations, including Steamboat Rock, the King and Three Queens, the Sail, the Sphinx, the Cibola Mitten, Coffee Pot Rock, and Chimney Rock in the far distance.

During the lunch break, a lively, but friendly discussion ensued concerning the rock formation commonly known as the Sphinx.  Some of the hikers said it was actually called the Mitten, while others steadfastly defended it as the Sphinx.  We all agreed to disagree and took several photos of it anyway.

We took our lunch break on a large, comfortable piece of slickrock in the shade, just off the trail, and shared pleasantries (and cookies) with several hikers and mountain bikers passing by.

As usual, I was simply in awe of the bright blue sky punctuated by luminous white clouds, and how beautiful the red rocks appeared against this perfect background.  Others clearly shared my appreciation for this gorgeous area in which we live.  The trails off Jordan Road are my personal favorites because the scenery is so breathtaking and there is a large network of trails that can be customized to meet any length of hike you might want to do.

At the end of the hike, the groups posed for photographs in the parking lot.  Then, some decided to continue hiking on other trails that also start at the Jordan Road trailhead.

If you are interested in joining the club, please visit the Sedona Westerners website at www.sedonawesterners.org/membership.  You are invited to our next monthly meeting at 7 p.m., Thursday, January 11, at the Sedona Methodist Church, 110 Indian Cliffs Road.  Sedona Westerners, written this week by Celeste Barrett Rubanick, appears every Friday in the Sedona Red Rock News.