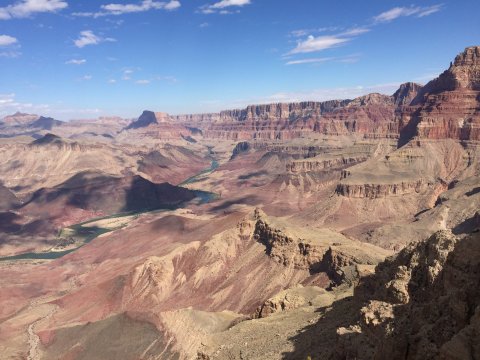 Grand Canyon view from the Tanner Trail below Cardenas Butte. Palisades of the Desert form the south rim of the Canyon here and the Colorado River is in the center of the photo. Various buttes and temples can be seen in the distance.

I normally hike with the Mustangs ability group of the Sedona Westerners on Thursdays.  Recently we had a special hike in the Grand Canyon.  This is unusual; due to the seasons, the Sedona Westerners only schedule a few hikes in the Grand Canyon during the months of September-October and April-May.  To avoid the crowds on the most popular trails into the Canyon, the Westerners only hike the less popular, more rugged trails, including the Hermit Trail, the Grandview Trail, and the Tanner Trail.  Recently a small group of us hiked the Tanner Trail from the Canyon’s South Rim down to Cardenas Butte and back.

We met at Posse Grounds Park and the Village of Oak Creek Outlet Center, then carpooled to the Grand Canyon trailhead.  The trailhead is located at the eastern edge of the national park, so we took SR89 to Cameron, entered the park’s eastern entrance, and drove a short distance to the Lipan Point scenic overlook.  The rugged, unmaintained Tanner Trail begins just a few dozen yards from the overlook.  Our hike leader was Colleen Barcus and I was the tailgater.  The first two miles of the trail are steep, challenging switchbacks with loose rock underfoot and rocks of all sizes that you must hike over.  After those difficult miles, the trail levels out and we could appreciate the scenery and the panoramic view more.

We were fortunate in that the weather, which is always a factor at the Grand Canyon, was mild and it did not rain substantially.  The temperatures were 65-75 degrees during our hike and it was alternately sunny and overcast.  We had a light sprinkle of rain on the way down and on the way up, but it wasn’t enough to bother us.  We hikers like to observe the geology and botany of the areas we hike through.  We often comment to one another about what we observe.  On this hike, we commented on the sedimentary rock layers that were displayed all around us.  We noted that Tanner Canyon, which the trail follows for nine miles to the Colorado River, was formed along the Butte Fault.  Ours was a day hike, so we did not go all the way to the River.  We followed the trail to a scenic overlook below Cardenas Butte, which allowed us to see a vast portion of the Grand Canyon, including the blue-green water of the Colorado River in the Inner Canyon.

As we hiked to Cardenas Butte, we noticed that the vegetation was similar to what we have around Sedona.  The trees were pinon pine and juniper and many of the cacti and succulents were the same:  prickly pear, hedgehog cactus, agave, and yucca.  We did see a new type of cactus in a few places along the trail.  We saw the fishhook barrel cactus, which is also known as the Arizona barrel cactus.  After about 2 ¾ hours, we reached our destination, the scenic overlook below Cardenas Butte.  The view was breathtaking; we could see many of the named rock formations within the Grand Canyon and the blue-green water of the Colorado River snaked its route through the Inner Canyon below us.  We could hear the distant roar of rapids below us.  In the distance, we could see rock formations such as the Apollo, Venus, and Jupiter Temples, as well as Cape Final on the North Rim.

After having lunch, taking pictures, and discussing what we were seeing from the overlook, we headed back up the trail.  About 2 ¾ hours later, we reached the trailhead where everyone celebrated a great hike by exchanging a high five with the hike leader.  We were all tired, but satisfied.  We had hiked 8 miles with 2,700 feet of cumulative elevation gain.  Another great day at the Grand Canyon for the Sedona Westerners!

If you are interested in joining the club, please visit the Sedona Westerners website at www.sedonawesterners.org/membership.  You are invited to our next monthly meeting at 7 p.m., Thursday, January 11, at the Sedona Methodist Church, 110 Indian Cliffs Road.  Sedona Westerners, written this week by Jeff Fargo, appears every Friday in the Sedona Red Rock News.