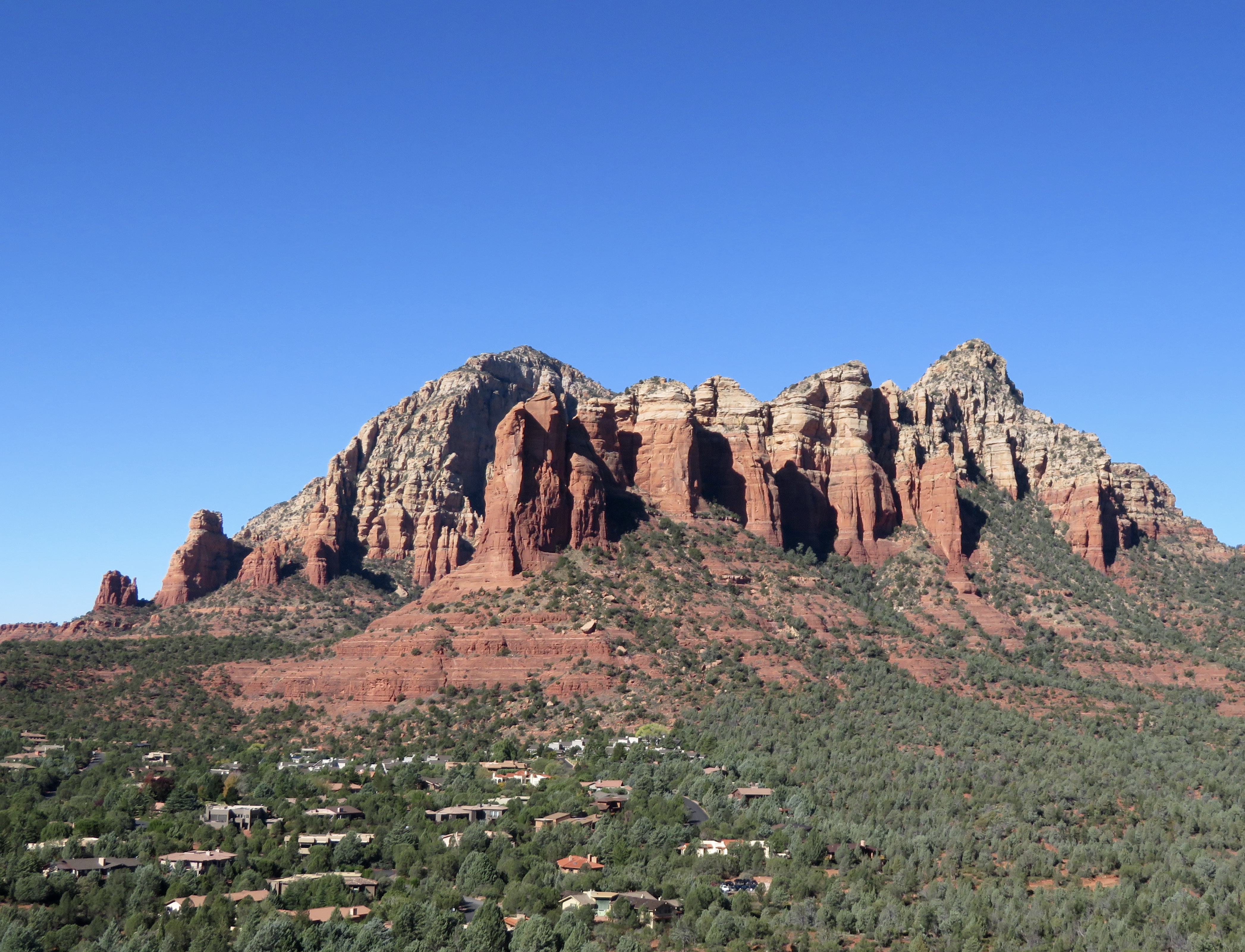 View from the Ant Hill off Grand Central Trail. The subdivision at the end of Soldiers Pass Road is in the foreground and Coffee Pot Rock and Capitol Butte can be seen in the background.

As is the custom of the Sedona Westerners, on this Sunday we were met by the Drovers’ Hike Boss, Terri Petrescu, who read us the rules for hiking with the Westerners.  The most important of all the rules are the wearing of proper footwear and the need to carry plenty of water.  As it was forecast to be a sunny and hot day, we started out early in the morning, rather than the normal Sunday afternoon Drovers’ hike start time.  We split into two small groups to better accommodate other hikers on the trail and to enhance our hiking experience by hiking in small groups.

From the trailhead just east of airport road on SR-89A, we headed north up the Adobe Jack trail, targeting the Devils Kitchen sinkhole about two miles away.  It was very pleasant walking through the Pinyon Pine and Juniper trees, which were interspersed with the occasional deciduous Cottonwood and Sycamore trees, which thrive anywhere near a seasonal water source.  The latter trees were thinking about changing color, but really had not gotten there yet as we have continued to enjoy much warmer than normal weather, thus delaying the coming of Fall.

We soon reached the Devils Kitchen sinkhole.  Paul Lindberg, a locally based geological engineer, studied all the area sinkholes in detail in 2010.  This sinkhole is one of seven that surround Sedona in Coconino and Yavapai counties.  Although it is not one of the largest, it is one of the most active ones around here.  It initially collapsed sometime in the 1880s and has been widening ever since.  The last major rockfall was in 1989, followed by more collapsing rock in 1995 along the northeastern rim.  Current geological studies map collapse hazards along the northeastern and western rims.  Since the cause of sinkholes is mainly subsurface karsting (dissolution of limestone rocks by formation water), it is difficult to predict what is going to happen and when.  Everyone in our hiking group was commenting on how much the various fractures have spread since they were they were last at the site; this is a common topic of conversation among sometimes-forgetful hikers.

From the sinkhole, we hiked west along the Jordan Trail.  On this part of the trail, we were out of the woods and had excellent views up Soldiers Pass and back toward Coffee Pot Rock.  We hiked parallel to the rock formations, which included the Sphinx and the Cibola Mitten.  Given these stunning views, it was tough to keep our eyes on the trail, causing some to stumble.  Eventually we climbed up Ant Hill and stopped for a snack, which included cookies from one of the hike leaders.  This hilltop offers 360-degree views of Sedona and its surrounding red rock formations.   As one hikes around Sedona, it is fun to attempt to guess the derivation of the name of a mountain, trail, or rock.  For example, was Ant Hill misspelled on maps and it is actually named after a member of the family or does the unique shape of the hill approximate an ant colony, big ants?  Refreshed, we continued down the Grand Central trail back toward the trailhead.  Once again, we descended into the Pinyon Pine and Juniper forest, but this time the shade was most welcome.

There are several trails that cross and loop through this valley, which is located between Uptown and West Sedona.  Given its easy access and moderate grades, this is an ideal hiking choice for anyone wanting to get out for a short walk to enjoy our forests; thus, experiencing first hand some of the wonderful views.   The Adobe Jack-Grand Central trail hike was capably led by experienced hikers Pam Smith and Dave Vanderwater.  Our hiking circuit was about five miles long with minimal elevation gain.  It was a great way to spend a Sunday morning.

If you are interested in joining the club, please visit the Sedona Westerners website at www.sedonawesterners.org/membership.  You are invited to our next monthly meeting at 7 p.m., Thursday, February 8, at the Sedona Methodist Church, 110 Indian Cliffs Road.  Sedona Westerners, written this week by Ernie and Lynn Pratt, appears every Friday in the Sedona Red Rock News.