Mustangs Hike Through Fall Color on Way to Vultee Arch 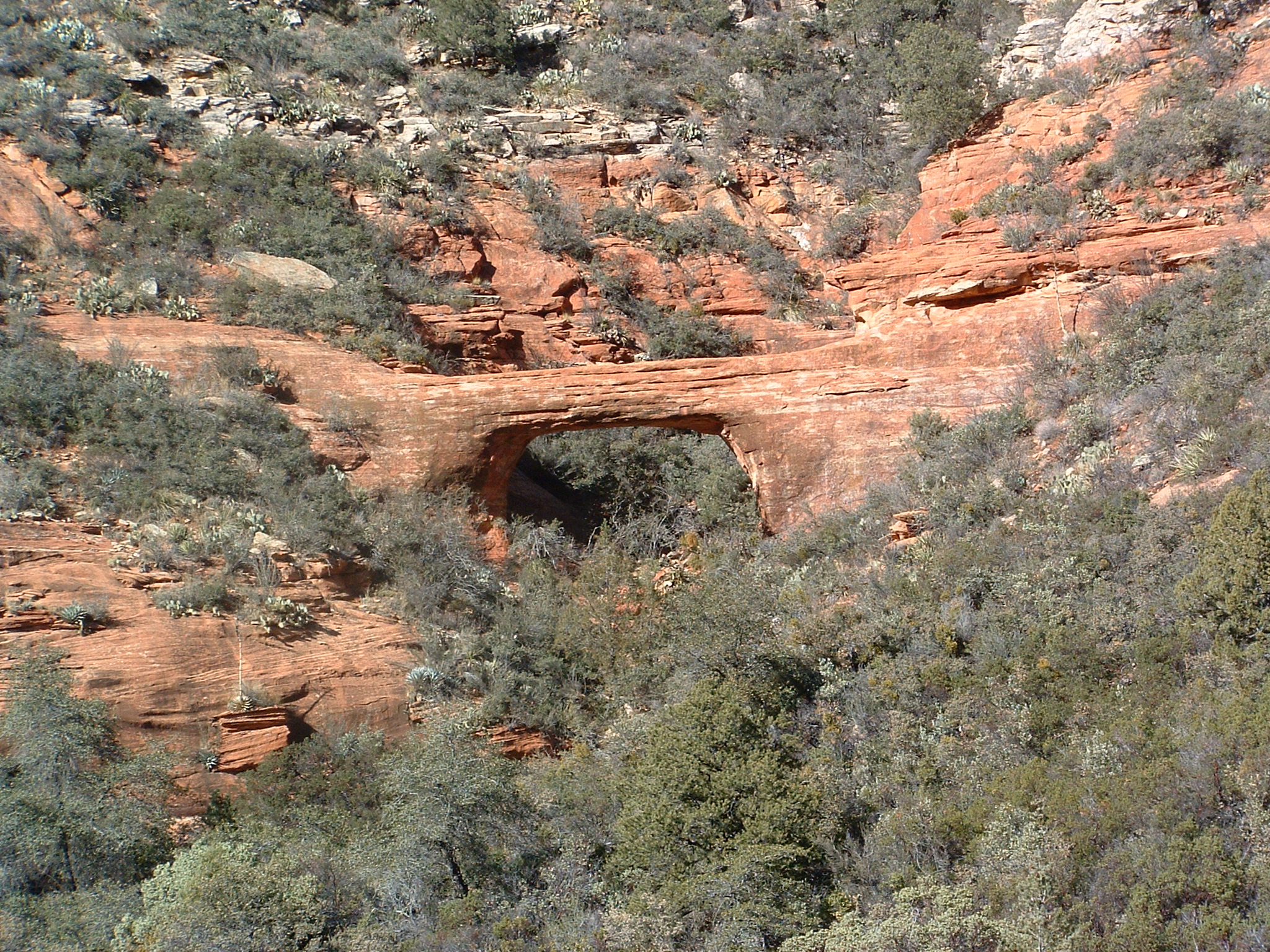 The fall colors may have been already gone in Flagstaff, but the Mustang hiking group of the Sedona Westerners were treated to a full kaleidoscope of colors as we hiked in Oak Creek Canyon this past November.  Our hike leaders, Trisha Travis and Jim Warren, warned us that the hike up from the bottom of Oak Creek Canyon to Sterling Pass would be steep and slick in spots.  Undeterred, we began our hike at the Sterling Pass Trailhead, alongside SR 89A, and were immediately welcomed by a narrow path with steep drop-offs to either side.  Several hikers recalled a past hike where a hiker had slipped from the trail, but was safely rescued, only a little worse for wear.

The trail to the Pass is less than two miles, but we traversed at least 25 switchbacks as we gained over 1,200 feet in elevation.  Gratefully, our leaders took pity on the “snowbirds” that had just arrived from the flatlands of Canada or the Midwest.  We stopped for several breaks, to allow our heavy breathing to subside.  After a short break at the 6,000-foot elevation Pass, we descended a mile into Sterling Canyon, to the intersection with the Vultee Arch Trail.  Although we were losing elevation that we had just so arduously labored to gain, we were treated to a panoply of fall colors, from brilliant red to mellow yellow.  The colorful Oaks, Maples and Sumacs lit up our trail.  Then the trail entered stands of Ponderosa Pine and Oak which showed the scars from the 1996 "Arch Fire.”  At the intersection of Sterling Pass and Vultee Arch Trails, there were nice views of the canyon, the mountains, and the Vultee Arch in the distance.

The trail dead-ends at a bronze plaque placed in memoriam of Gerard and Sylvia Vultee, who lost their lives in an airplane crash in the area on January 29, 1938.  The actual crash site is more than a mile north and at a much higher elevation, on the East Picket Mesa.  On the north side of Sterling Canyon, across from the plaque, is the sandstone arch named for Vultee, who was an early aircraft designer from California.

We had our lunch in the sun on the red rocks below the plaque.  After a brief respite, some of the group decided to hike further, to reach the top of the Arch.  The rest of us decided to socialize on the red rocks and enjoy the views down Sterling Canyon, wisely recalling that we would need to retrace our steps back up to the Pass to reach our cars.  Regrouping after a while, we then retraced our steps to the top of Sterling Pass, again admiring nature’s brilliant fall foliage.  We reached our cars at the trailhead and after much discussion and comparing of our Garmin GPS devices and smartphone hiking apps, we reached a consensus that we had hiked 6.2 miles and gained 2,200 feet of cumulative elevation.

After thanking our hike leaders, who not only led the hike, but had previously scouted the route, we headed back to Sedona.  We all agreed that the effort to hike up to Sterling Pass, although arduous, was well worth the reward of the fall foliage and of course, the terrific red rock vistas.

If you are interested in joining the club, please visit the Sedona Westerners website at www.sedonawesterners.org/membership.  You are invited to our next monthly meeting at 7 p.m., Thursday, April 12, at the Sedona Methodist Church, 110 Indian Cliffs Road.  Sedona Westerners, written this week by Jim Kemper, appears every Friday in the Sedona Red Rock News.