The Rustlers Hike the Schuerman Mountain and Lime Kiln Trai 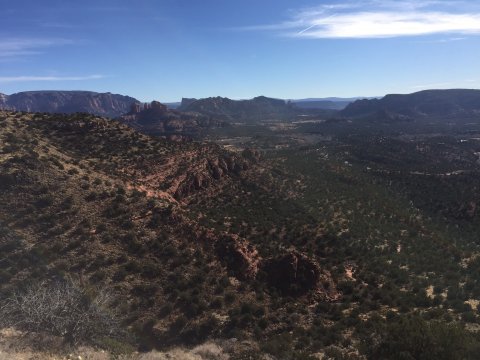 View from the top of Schuerman Mountain. Lee Mountain, Cathedral Rock, and Courthouse Butte can be seen from left to right in the center of the photo. Photo courtesy of Jeff Fargo

It was only my second hike with the Sedona Westerners and somehow, I ended up with the bonus of getting to describe the experience.  Before the hike began, I was more familiar with the cacti along the Schuerman Mountain trail than I was with the group members of the Rustlers.  By the end of the hike, that had all changed – for the better.  I felt like I belonged with the group, as if I had bonded with all of them during the hike.

The Rustlers, a moderate ability group of the Sedona Westerners hiking club, was assembling for one of its regular Saturday excursions.  The jaunt began at the trailhead behind Red Rocks High School, our carpool destination.  We departed from that area at about 9:45 a.m. on the Schuerman Mountain trail.  Intellectual chatter filled the air, contributing positive energy to the warm, sunny morning.  Our hike leaders were Linda Schermer and Heather Baker.  The two, 18-year veterans of the Westerners, were very knowledgeable, pointing out various highlights and informing us of necessary details about the trail.

From the top of Schuerman Mountain, we were shown Airport Mesa, Twin Buttes, and Cathedral Rock, to name a few of the notable formations to the east of us.  Even at a distance of a few miles, Cathedral Rock maintained its air of divinity.  While walking along the trail, I noticed volcanic rock underfoot and several types of cacti, along with abundant grasses and some trees, mainly juniper. The general feel of it was one of wide open expanse, with blue sky as our backdrop.  We did pass one tank, or small, dammed water pond.  During monsoon season it was probably full of water, but, as expected, it was now bone dry.  The lack of recent rain had left the entire landscape thirsting for anything resembling moisture.

The trip’s highlight was the strengthening of the group.  Pleasant conversation, combined with the feeling of us all as one effectively functioning unit, created a rock-solid base.  At one point, one of the group members lost his footing. Immediately, two others were there, helping him get back to his feet.  This was an example of our group working together in unison and it continued during the course of the hike.

Fortunately, the hike was not overly strenuous.  The cumulative elevation gain was 385 feet and the total distance hiked was 3.6 miles.  Sure, there were some steeper spots along the way, but they were successfully handled by all the group.  We did not need any ropes or special climbing equipment to navigate the trails.

After crossing the large expanse on top of Schuerman Mountain, we encountered the junction with the Lime Kiln trail part of the way down the back side of Schuerman Mountain.  This was the last leg of the entire jaunt, which veered off to our left.  This trail was a bit steeper than the pleasant, rolling, open areas of the mountain top.  However, it was easy to hike, because of the way the trail was constructed.  Appropriate bends and turns created a suitable descent to Red Rock Loop Road, where our cars for carpooling were waiting for us.

If you are interested in joining the club, please visit the Sedona Westerners website at www.sedonawesterners.org/membership.  You are invited to our next monthly meeting at 7 p.m., Thursday, April 12, at the Sedona Methodist Church, 110 Indian Cliffs Road.  Sedona Westerners, written this week by Harry Strong, appears every Friday in the Sedona Red Rock News.