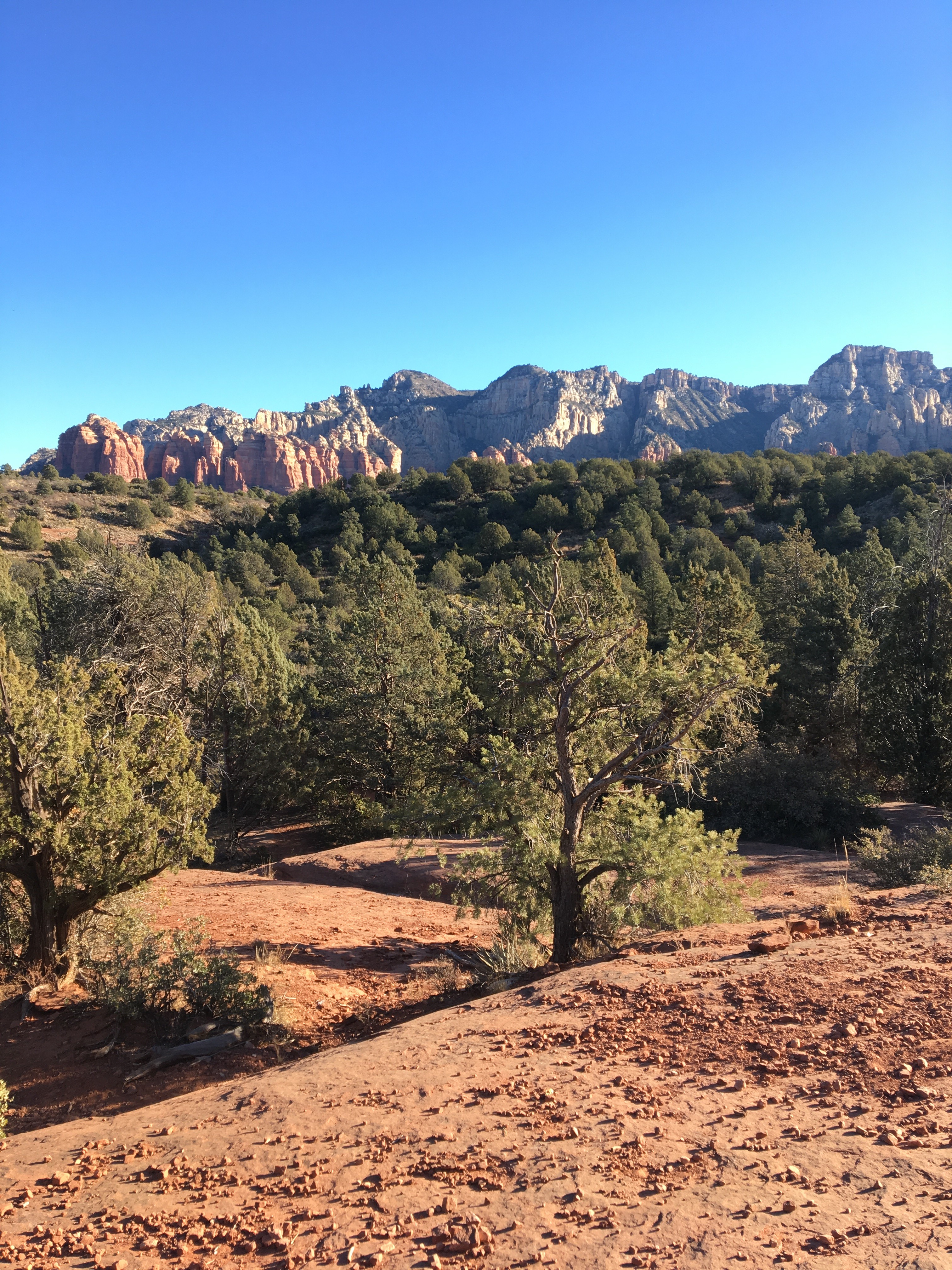 It was January 2018 for the Sedona Westerners’ Amblers hiking group.  We could sense the New Year’s resoluteness floating in the air.  It was time to get back to nature and get some good exercise.

On a morning when most of our country was shivering or starting to dig out from record storms, we were met with a morning more like late March, than early January.  The sky was a clear blue and the temperature was close to 50 degrees as we assembled at the Broken Arrow trailhead off Morgan Road, an easy to get to spot only some three miles from the “Y” (which is the intersection of SR179 and SR89A).  The last 50 yards of the road were a fairly benign dirt byway.

Our moderate trek would take us up to the shoulder of the rock formation, which then leads most of the way to the top of Battlement Mesa.  We started out on the Twin Buttes trail and then took the Hog Heaven trail up an easily recognizable shoulder of this distinctive rock formation.  We further advanced up towards the top of the Mesa.  Reaching the top of Battlement Mesa, we were rewarded with fantastic views and a comfortable place for a lunch break.

The Battlement Mesa hike is a remarkable hike that left us with the feeling of being way back in the wilderness, while we were really only a few miles from the center of Sedona.  This was about a four-mile hike with a cumulative elevation gain of around 500 feet.  Much of the first half of the hike is uphill, though not overly steep or challenging.  The trail goes through a southwestern forest dominated by juniper, manzanita, agave and prickly pear cactus.  As we reached a bit higher elevation, there were a smattering of pines as well.  The mixture of grays, browns, and manzanita reds, along with a palette full of greens, would inspire both the painter and photographer.

Maybe more impressive than the flora are the geological wonders along the trail.  We passed by colorful rocks the size of refrigerators and even larger, while walking along the trail.  Imposing cliff faces abound, allowing our imagination to bring forth myriad ancient carvings.  The amateur geologists among us were recounting the ages of the various rock layers within the formations.  All of us on the hike were treated to outstanding views of much of Sedona, from Thunder Mountain in the distance, to nearby Submarine Rock and Elephant Rock.

At the highest levels of Battlement Mesa, we were rewarded with even more awe-inspiring views of the entire area and distant peaks.  The way up and down is quite steep and rocky in places.  Care is needed in choosing where you step, but it provides ample rewards for the more experienced and well-equipped hiker.

From the group’s chatter on the almost all downhill return to the trailhead, it was clear that everyone enjoyed their time in the forest and beginning the New Year with some healthy exercise.