Westerners Learn about Search and Rescue from Experts 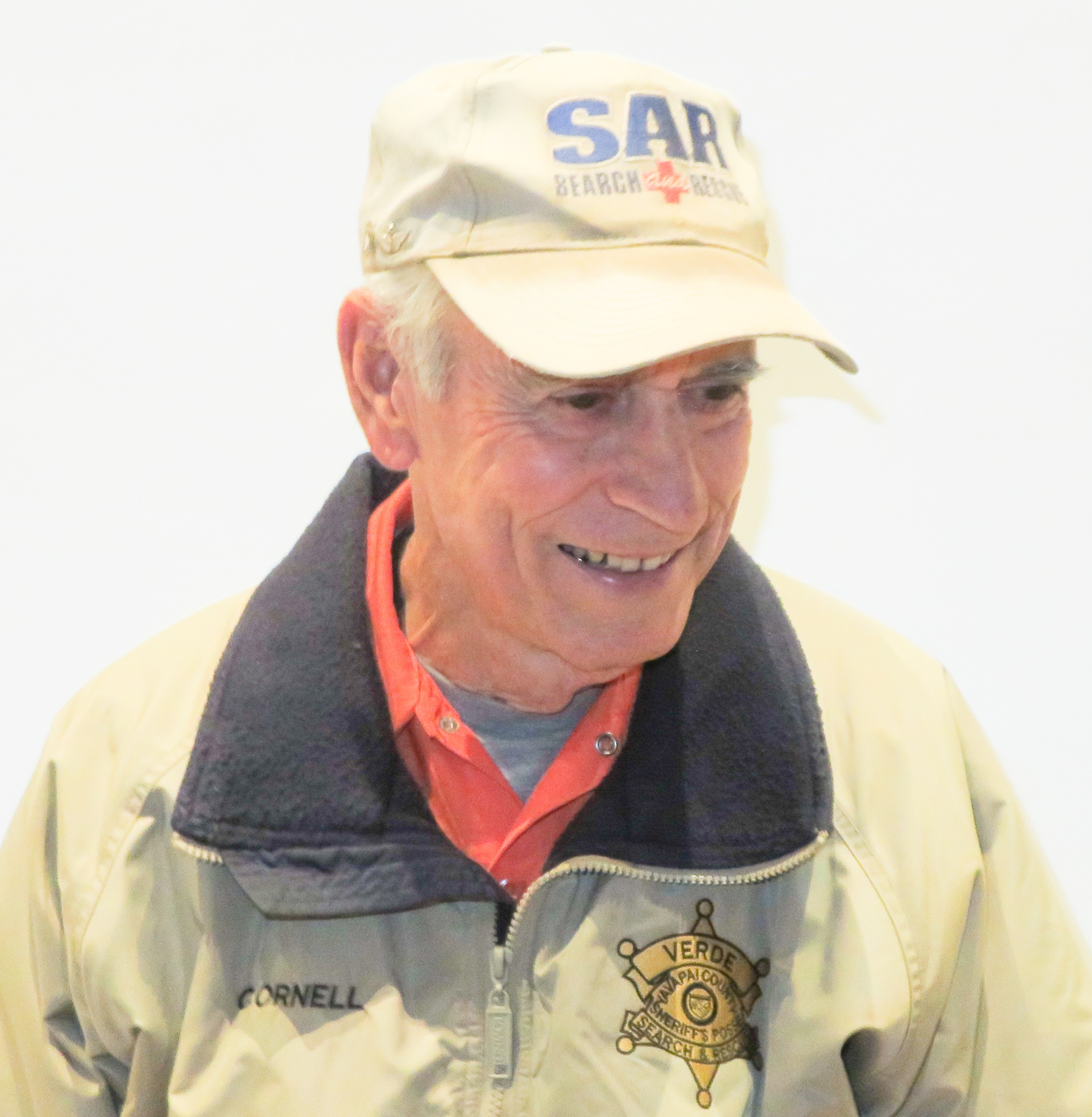 COL (Ret) Al Cornell has been a key member of the Verde Search and Rescue team for over 20 years. He recently was the guest speaker for the Sedona Westerners monthly meeting, providing them up-to-date information about Search and Rescue operations in Yavapai

With that morning's Red Rock News featuring the dramatic helicopter rescue of a local teen who had been stranded overnight on nearby Thunder Mountain, the speaker's topic at the monthly meeting of the Sedona Westerners Hiking Club could not have been more timely: Search and Rescue.  The speaker was COL (Ret) Al Cornell, whose 30-year career in the U.S. Army included Jungle Survival School and assignments in Asia and Latin America. His Army career was followed by years as the Training Officer for the Verde Search and Rescue unit and extensive work with the organization, Friends of the Forest, a U.S. Forest Service volunteer auxiliary.

As Al pointed out, a call for Search and Rescue (SAR) may come at any time of day or night and involve a search for a missing dementia victim, a swift water rescue, the combing of a vast wilderness area with only vague location information, or the delivery of survival supplies to a victim who has been found, but who cannot be safely brought out immediately.  Unfortunately, some searches result in the recovery of a body.

Al emphasized that many persons who are the subject of Search and Rescue operations are poorly prepared, having gone into the wilderness in shorts and sandals, with inadequate water and perhaps having left their map, flashlight and cell phone safely stowed in the car.  On the other hand, unavoidable accidents do happen to experienced hikers, so hiking with proper gear is essential - nobody goes out planning to be rescued.

Search and Rescue in Arizona has not always been as well organized as it is today, with well-trained units across the state able to call on each other's special abilities when needed.  Within the Yavapai County Sheriff Office’s team, there are a specialized K-9 unit, Jeep and 4x4 and ATV units, a horseback unit, air units, and a Backcountry unit.  In the Verde SAR team, training goes on constantly, or, as Al Cornell put it, "you never graduate from Search and Rescue University".

Al pointed out that, unlike some states, Arizona does not charge victims for their own rescues.  This policy is for the victim's own safety, encouraging them to get help right away, but lessens the danger to rescuers as well by, for example, reducing nighttime searches.  In Arizona, a state fund covers 50% of the first $1000 cost of a rescue, 75% of the next $20,000, and 100% of the rest.

Our local Search and Rescue teams are the busiest in the state.  Al's figures showed that, of about 600 official Search and Rescue operations statewide last year in Arizona, 58 were in Yavapai County, more than in any other county.  As an example of a successful operation, Verde SAR and Sedona Westerner member Jeff Fargo followed speaker Al Cornell with a summary of the Thunder Mountain rescue just completed that morning.

Jeff was part of the SAR team called to locate and rescue a local teen who had begun his ascent of Thunder Mountain the morning of the previous day.  The subject reached the summit, but became disoriented on the way down, becoming "ledged out" and unable to go up or down.  The teen was able to make a 911 call at 12:30 p.m., but communication with him broke down due to his low battery.  Searchers were at Thunder Mountain by 2:30 p.m., but because of poor location information, the subject was not spotted until late in the day.  His location required a technical rope rescue, so the Backcountry team was called.  They arrived in the evening but were unable to rescue him in the darkness.  Although darkness made rescue impossible, survival supplies were lowered to the subject by helicopter.  Also, a SAR team kept in contact with him and provided comfort and advice overnight.  At first light the next day, a Department of Public Safety helicopter lowered a SAR member down to the teen and both were then safely "short-hauled" to the Andante Trailhead, where the young man's family awaited him.

The rescue involved carefully coordinated and well-rehearsed procedures by multiple volunteer and government Search and Rescue units.  They train together and deploy as required to search and rescue those needing assistance throughout Yavapai County.