Sedona Westerners Hike to the Abyss at the Grand Canyon 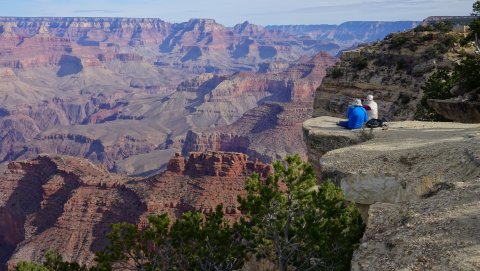 A stunning view of the Grand Canyon from Hopi Point on the South Rim, which is located on the West Rim Trail along the West Rim Drive.

The Amblers group of the Sedona Westerners typically hike in the stunning red rocks of Sedona.  However, the Amblers Hike Boss, Pat Capanna, decided to expand their horizons by scheduling a five-mile hike of the West Rim Trail at the Grand Canyon.   Although National Park Service shuttle buses quickly whisk visitors from one rim viewpoint to the next, hiking between stops encourages frequent pauses to take in the expansiveness and ever-changing vistas that the Grand Canyon presents.  There is a saying that, “God made the Grand Canyon, but He lives in Sedona.”  How fortunate that in just two hours we can experience both!

The hike began at the Village Route Transfer stop for the first jaw-dropping view and photo op.  From here we could see: El Tovar hotel, the premier Grand Canyon accommodation; Kolb Studio, built by the Kolb brothers for their souvenir photo business; and the Bright Angel Trail below, with several diminutive hikers.  In 1903, Ralph Cameron improved this Native American route into the Canyon, called it the Bright Angel Trail, and charged a $1 toll (worth about $26.45 today) to use "his" trail.  Most trekkers want to descend into the Canyon, but today's hike leader, Clint Gelotte, thinks the Rim Trail offers a rewarding alternative and besides, you don't have to worry about climbing back out.

The first official stop on the Rim Trail going west is the Trailview Overlook.  We were so lucky to have a crystal-clear day enabling us to see the San Francisco Peaks, 56 miles away.  Continuing along the rim, Louise Gelotte eagerly shared her tree expertise.  It's not so difficult, since in this life zone, there are only two trees, the Pinyon Pine with its short needles and small cones containing edible seeds and the Utah Juniper with seed cones that are called berries.  The trail is rimmed here with large blocks of Kaibab limestone, many containing fossils of ancient sea life.  We would have to climb to the top of Bear, Thunder, or Munds Mountains to have an opportunity to see these same fossils in Sedona.

Our next stop was Maricopa Point.  From here we could look down and see the ruins of the Orphan Mine.  Originally a copper mine, it eventually became the most productive uranium mine in the United States.  Reduced demand for uranium stopped the mining and the property was purchased by the National Park Service in 1987.

A half-mile more brought us to Powell Point, a memorial to John Wesley Powell, the famous one-armed explorer, who in 1869, led the first group of nine white men down the Colorado River in four wooden boats.  From here it was just a short walk to Hopi Point, which Peggy Harris pronounced as the "best lunch view ever."  At Hopi Point, the Colorado River could be seen in five places, a full mile below us. The Earth's geological history being on full display is what makes the Grand Canyon such a unique place for hiker Hal Frank, a retired geologist.  Fellow hiker, Ron Goldberg, just loved the special beauty of the place.  They both agreed that having a cold beer at the lodge after the hike was just one more reason to embrace the Canyon.

On to Mohave Point, where we could see the Granite and Hermit rapids.  Although they looked quite harmless from here, Peggy shared with us her terrifying experience of being caught under her raft, after it flipped over in Granite rapids.  The Abyss viewpoint, with its very steep walls, was our final hiking stop.  A much-welcomed shuttle bus then took us to Hermit's Rest, where Cleo Duardo bought the popular book, Over the Edge: Death in Grand Canyon.  This book chronicles all the deaths that have occurred in the Grand Canyon.  Fortunately, there would be no additions to the book from this hike!

If you are interested in joining the club, please visit the Sedona Westerners website at www.sedonawesterners.org/membership.  You are invited to our next monthly meeting at 7 p.m., Thursday, September 13, at the Sedona Methodist Church, 110 Indian Cliffs Road.  Written by Louise Gelotte.