Sedona Westerners Hike to Dripping Springs in the Grand Canyon 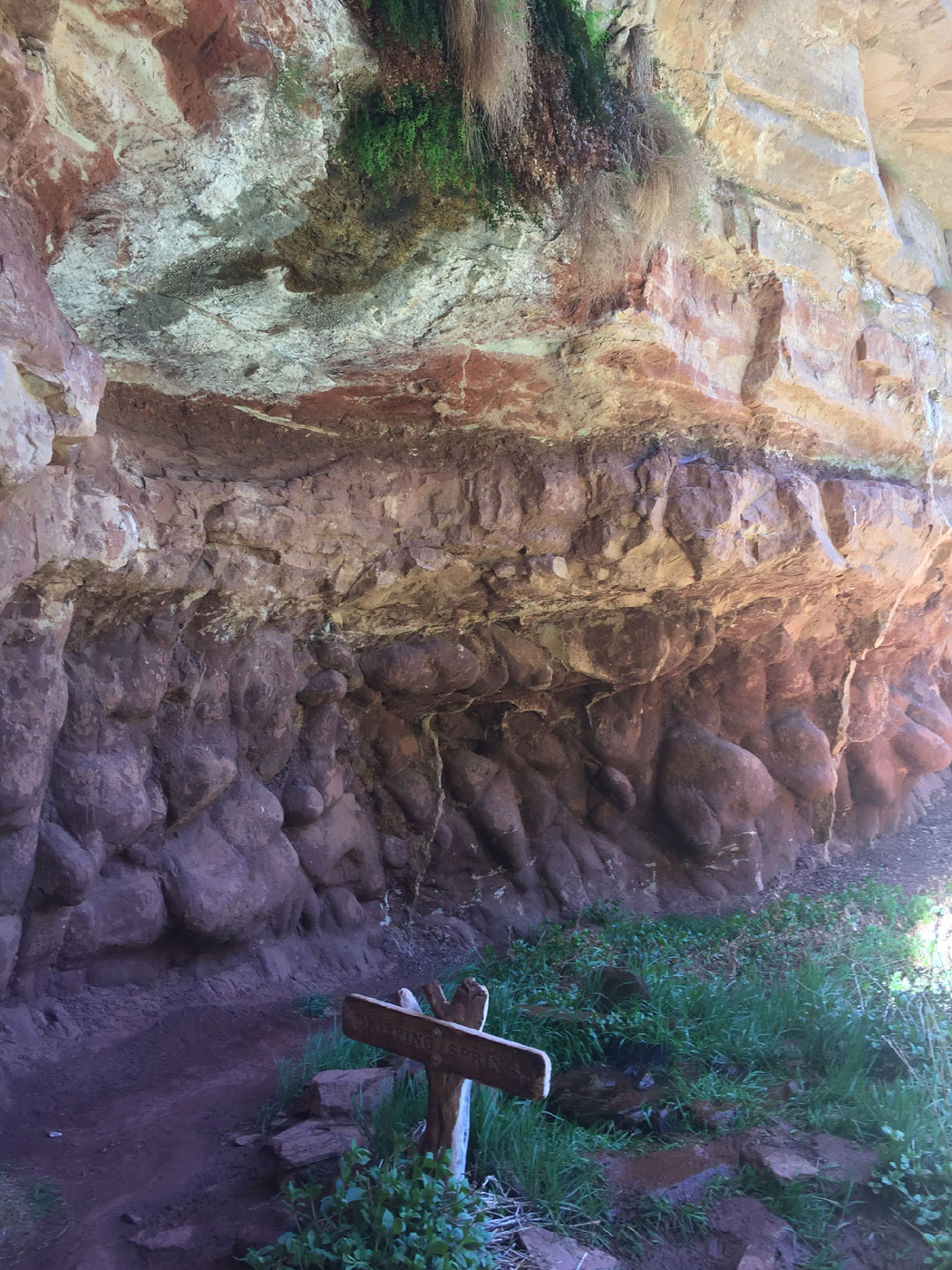 Dripping Springs is a perennial spring in the Grand Canyon. Its life-giving water enables a small, green oasis to form in a hot, dry environment. The sign at the base of the springs says Ã¢â¬ÅDripping Springs.Ã¢â¬Â

I often hike with the Rough Riders ability group of the Sedona Westerners on Saturdays.  Recently we had a special hike in the Grand Canyon.  This is unusual; due to the seasons, the Sedona Westerners only schedule a few hikes in the Grand Canyon during the months of September-October and April-May.  To avoid the crowds on the most popular trails into the Canyon, the Westerners only hike the less popular, more rugged trails, such as the Hermit Trail, the Grandview Trail, and the Tanner Trail.  Recently a small group of nine of us hiked a combination of four different trails from the Canyon’s South Rim down to Dripping Springs and back.

We met at Posse Grounds Park and the Village of Oak Creek Outlet Center, then carpooled to the Grand Canyon trailhead.  The trailhead was in the western section of the South Rim.  We drove through Tusayan and just before we entered the south entrance of the National Park, we turned on Forest Road 328 and followed it to the trailhead.  Both the Dripping Springs and the Waldron trailheads were about a mile from where we parked.  Our hike leader was Mike Holmes and our tailgater was Michael McCaffrey.  Initially the Dripping Springs Trail was level and easy hiking as we paralleled the South Rim.  After a while we came to a side canyon and began to make our way down toward Dripping Springs.  The trail was narrow and full of loose rock, but we experienced hikers did just fine.  About three hours after we began hiking and about six miles down the trail, we arrived at Dripping Springs.

Dripping Springs is a small, but reliable, year-round spring that emerges from the rock wall and falls about fifteen feet to the floor of the rock alcove.  Its life-giving water allows grasses, shrubs, and trees to grow at the base of the spring and nearby.  Springs are rare in the Canyon.  The Grand Canyon overall is very dry with plenty of cacti, so the greenery near the spring was a welcome relief from the surrounding hot, dry environment.  The spring falls into a shady alcove that is an ideal place for hikers to rest and eat.  Our group ate our lunch there.  Before we left to start back, many of the group took advantage of the cool spring water by soaking their shirt or hat or even their head in the falling water.

Shortly after we departed Dripping Springs, we encountered the Boucher Trail, named after Louis Boucher, who was the “hermit” for whom the Hermit Basin and Creek were named.  He established a seasonal camp at Dripping Springs in the 1890s and hosted visitors in tents and guided them.  We followed the Boucher Trail until it intersected the Hermit Trail.  At this point, we could see the gorge cut by Hermit Creek running toward the Colorado River in the main canyon.   These were the best views of the Canyon that we had seen, and everyone was taking pictures.

The Hermit Trail continues 1,400 feet up a series of switchbacks and ends at Hermit’s Rest on the South Rim.  However, we took the much less hiked Waldron Trail, which branched off the Hermit Trail and took us up through a different set of switchbacks to the Waldron trailhead in the western portion of the South Rim.  From there, it was only a mile to where we had parked our cars.  About three hours after we departed Dripping Springs, we reached the cars where everyone celebrated a great hike by exchanging a “high five” with the hike leader.  We were all tired, but satisfied.  We had hiked 12 miles with 2,700 feet of cumulative elevation gain.  Another great day at the Grand Canyon for the Sedona Westerners!

If you are interested in joining the club, please visit the Sedona Westerners website at www.sedonawesterners.org/membership.  You are invited to our next monthly meeting at 7 p.m., Thursday, November 8, at the Sedona Methodist Church, 110 Indian Cliffs Road.  Written by Jeff Fargo.