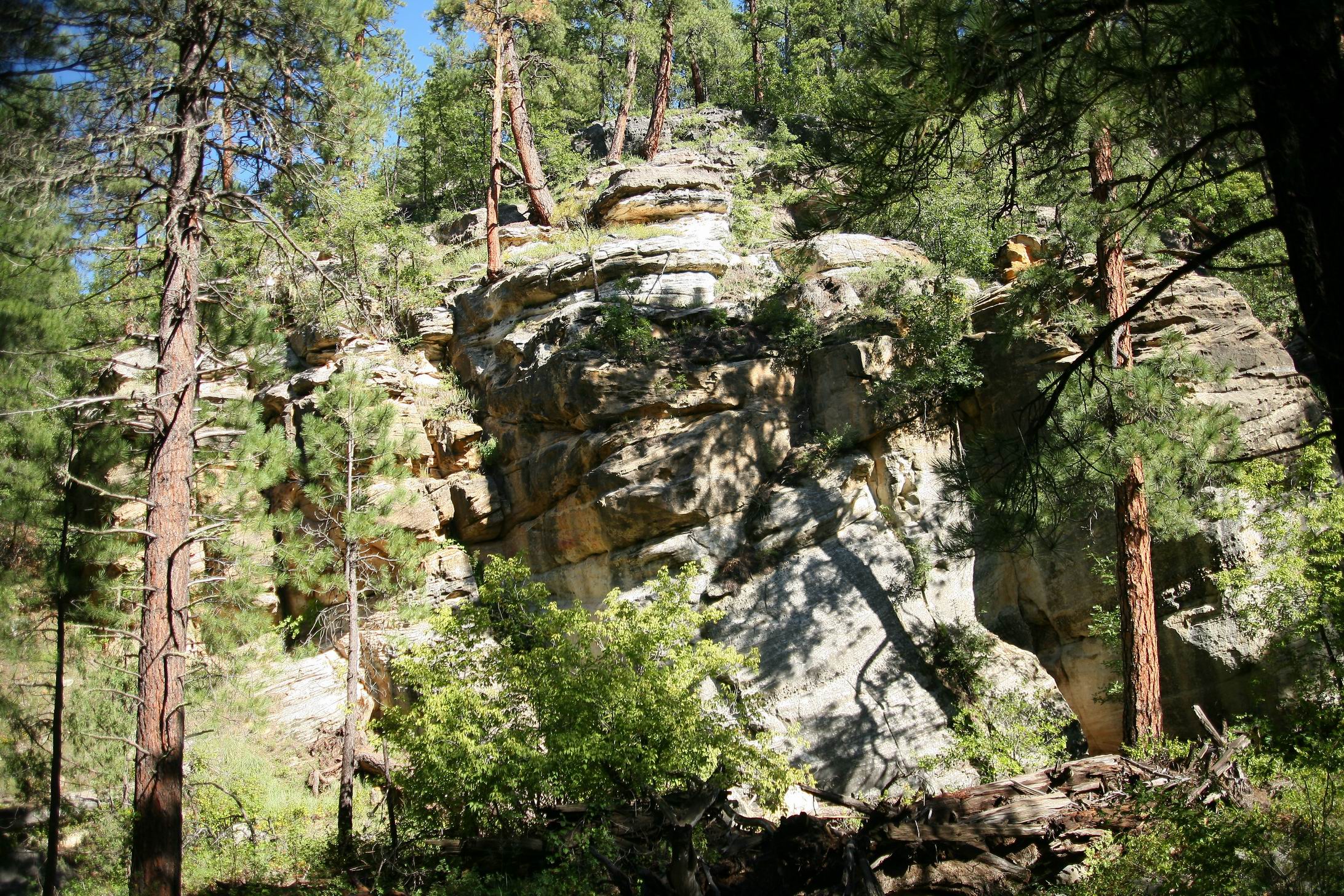 Viewed while hiking on the Kelly Canyon Trail, this is one of the beautiful rock formations on the south wall of Kelly Canyon, which is located off SR 89A, on the way north to Flagstaff. Large Ponderosa Pines dominate the landscape. (Photo: Scott McFeely)

Another hot day and the Westerners hightail it up SR 89A to Kelly Canyon Trailfor the first hike of the season.  Although Kelly Canyon Trail is a perennial favorite of the Sedona Westerners’ Dogie group, our leaders Linda Schermer and Scott McFeely announce that this year’s hike will have a new beginning.  So, as we turn off SR 89A toward the Kelly Canyon Trailhead, we drive past the traditional parking spot and stop at the bottom of a long hill which is intersected by Pumphouse Wash.  After “rock-hopping” down the Wash for about a half mile, we intersect the Trail and head up Kelly Canyon. Initially, we were treated to splendid rock formations which lined the mouth of the Canyon.  As we craned our necks to absorb the beauty of the rock walls, we were ever cognizant of the need to watch our steps as we hopped from rock to rock and skipped over the still flowing stream.

The rock formations along the trail gave way to the Ponderosa Pine forest that lined the Canyon.  The Canyon had been closed for most of the summer, sinceMay, because of very dry conditions and the danger of wildfires; however, the monsoon rains had dissipated any threat of wildfires and the Ponderosa forest floor was quite damp.  It was now home to a plethora of wildflowers.  Linda Schermer, our Westerner resident horticulturalist, was peppered by fellow hikers to identify the myriad of flowers that lined the trail.  By day’s end, she had identified almost a dozen flowers including: Mule's Ears (yellow), Goldenrod (yellow), Spiderwort (blue, purple and pink), Silene (red), Potentilla (dark red), Indian Paintbrush (assorted reds), Fleabane (white, yellow center), Aster (purple, yellow center), Lupine (blue), Geranium (white, pink, fuchsia), and Woodland Pine Drops (brown, don't produce chlorophyll).

Wildflowers were a treat, but then we began noticing spongy “things” along the trail which were bright orange.  The common folklore is that a brightly colored mushroom is to be avoided as poisonous.  The bright color did not deter Terri Petrescu, who began filling a large shopping bag with the fungi.  Terri is the Hike Boss for the Dogies this year, so we were hesitant to question her.  She identified the orange fungi as “lobster” mushrooms and assured us that this was one type of orange mushroom which was quite edible.  Terri said after carefully cleaning the mushroom, all you needed to do was slice and fry them in a little butter and garlicto create a tasty accompaniment to any meal.  At the end of the hike, Terri generously shared some of the “lobster” mushrooms with the brave hikers who wanted to sample nature’s bounty.  That night, several of us, with some trepidation,did in fact try Terri’s recipe and lived to hike another day. By the end of the hike,Terri had identified several more mushrooms (not all of which are edible) including: Russula, Slippery Jacks, Club Foot, Cauliflower, Puffballs, and Sun Caesar.  One final word of CAUTION: Wild mushrooms should not be eatenwithout a knowledgeable positive identification that they are safe, since there are many in the wild that can make you sick or worse.

After being regaled with wildflowers and mushrooms, we still had time to notice the tadpoles and small snakes in the pools that had formed in the rock floor of the stream that flowed along part of the trail.  Our hike was filled with nature’s beauty, but what any hiker wants to know at day’s end is how far we went.  So as with most hikes, we finished by comparing data from our smartphones and Garmins.  Selectively choosing to agree that the gadget with the highest reading must be correct, we concluded that we had hiked over six miles with a cumulative elevation gain of over 900 feet.  Thus concluded another fun-filled day of hiking and fellowship and start of another hiking season.

If you are interested in joining the club, please visit the Sedona Westerners website at www.sedonawesterners.org/membership.  You are invited to our next monthly meeting at 7 p.m., Thursday, November 8, at the Sedona Methodist Church, 110 Indian Cliffs Road.  Written by Jim Kemper.