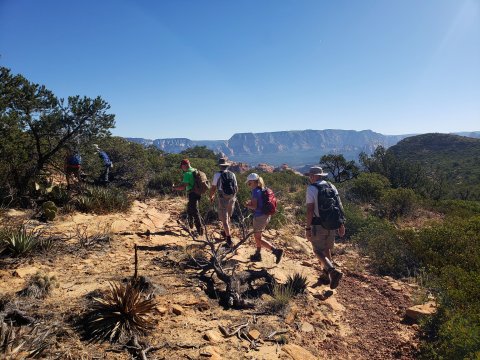 Sedona Westerners hiking the Bear Mountain Trail. The red rocks in the center of the photo are Fay Canyon and Wilson Mountain can be seen in the background. (Photo by Jay Mackey)

During a week of warm weather, with days in the mid-90’s, the Mustangs met at Posse Grounds and set off to Bear Mountain. We were introduced to our hike leader, Brad Bell, and his co-leader, Crystal Marty. During the carpool ride to the Bear Mountain/Doe Mountain Trailhead, there was much discussion about recent hikes. It was a bright, sunny day for a great hike up and down Bear Mountain with a total distance of 5.2 miles and a cumulative elevation gain of 1,900 feet.

As we set off to reach the first bench, Brad Bell reminded us that this was a difficult, all uphill/downhill hike and to use our hiking poles and bring plenty of water. Most of the group had done the Bear Mountain Trail at least once before and they were well prepared. On our way up the rocky trail to the first bench, we paused for a breather several times. Upon reaching the first bench, it was easy to understand why this is one of the most popular, well-known hikes in Sedona. The views are awesome back towards Sedona, with distinct views of Thunder, Wilson and Munds Mountains. Continuing towards the second bench, we were surroundedby plenty of healthy plants such as: Manzanita, Scrub Oak, Pinion Pine, Juniper, Agave and Prickly Pear cactus, and some Hedgehog cactus. The trail was well designed, including many rock stairsteps. This made it easy for us to step up andproved helpful on the way down.

After reaching the second bench, we saw great views in both directions down Bear Mountain, into the Fay Canyon area and down the west side to red rock ridges that have led to the Bear Left and Bear Paw hikes done by the Westerners. We then reached some false summits of Coconino Sandstone that required rock scrambling.We could now see the true Bear Mountain summit and the steep climb for our final push. It was a surreal scene with all the amazing views towards Mingus Mountainto the west and Munds and Lee Mountains to the east.

After a hard 20-minute climb, we reached the summit where a well-placed Forest Service sign stated, “End of Trail.” Here we finally had the ultimate view, a 360-degree view of the area surrounding Sedona and the many rock formations and canyons in the area. Views to the north revealed the San Francisco Peaks and further to the west we could see Black Mountain, Casner Mountain, and Sycamore Canyon. As I was checking my GPS to see what the elevation was (6,572 feet), several hikers exclaimed that they could see the parking lot at the trailhead and all the people looked like ants. Yes, we felt like we were on the top of the world, the world of Sedona anyway!

As popular as Bear Mountain is, the reward for taking on such a difficult, rigorous trail can only be understood after you have reached the summit and have seen the spectacular views. We took our lunch break at the summit, on a northern ledge overlooking Red Canyon.  We could see the Palatki Heritage Site far down below.

Coming down seemed much easier at first, with no heavy breathing and the hikeseemed to go much faster than the uphill effort.  Later in the descent the wear and tear on the legs, knees, and feet became more difficult for some hikers, especially if hiking poles weren’t used. Despite the hiking fatigue and the glaring sun, the Mustangs got back to the trailhead in record time. As we descended the last two benches in the 1 p.m., 90-degree sun, we were blessed with some steady breezes that offset the heat. Once we reached the parking lot, the group exchanged a “high five” with the leader for doing a good job on such a tough hike and helping to make the hike a pleasant one for all.

If you are interested in joining the club, please visit the Sedona Westerners website at www.sedonawesterners.org/membership.  You are invited to our next monthly meeting at 7 p.m., Thursday, November 8, at the Sedona Methodist Church, 110 Indian Cliffs Road.  Written by Jay Mackey.