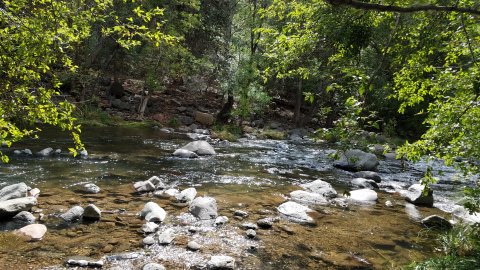 Oak Creek viewed from the Casner Canyon Trail where it meets the creek. The Grasshopper Loop is a series of trails that keep you close to the creek in scenic Oak Creek Canyon.

On a recent partly cloudy morning, more than a dozen members of the Sedona Westerners Hiking Club assembled to hike the Grasshopper Loop.   Saturday morning’s Rustlers group met as usual in the parking lot at Posse Grounds Park.  We carpooled to the trailhead on State Road 89A, a half-mile north of Grasshopper Point Picnic Area.  We started up a sketchy six-tenths of a mile trail on the west side of the road in two groups led by Bert McLean and Kris McLean.  The first ten minutes of this hike made sure that I was getting my daily cardiovascular exercise, as it was straight uphill!!  I had to focus on my footing initially, but then the trail became more relaxing, as we reached a flatter area.

I was in the second group, and we took an unexpected turn that gave us a gorgeous view of the Wilson Mountain saddle and the play of clouds and shadows all around its plateau.  We joined the South Wilson Trail and the eight-tenths of a mile descent to Midgley Bridge gave us magnificent views of Uptown Sedona, the rock formations known as Lucy and Snoopy, and Cathedral Rock.  If you have not been there, the Bridge provides a beautiful view of part of Oak Creek Canyon and Oak Creek, far below.  After crossing under 89A, we followed the Huckaby Trail east, high above Oak Creek.  It was remarkable how loud the creek sounded, even though it was fairly far down below us!  We then took the Huckaby Trail downhill and soon we had a nice rest break with the other group, next to Oak Creek.

It is amazing how you can be among the cacti, Scrub Oak and yucca one minute, and among soft Cottonwoods and water-loving plants in the next minute.  Our two groups separated again, as we hiked along Oak Creek with its rock scrambles to test our flexibility and spectacular ledges overlooking the lovely deep pools of Oak Creek.  On a warmer day, the temptation would have been to take a dip.  Indeed, it made my mind take a flight of fancy, to think of all the feet through the ages, which have launched from this very spot, into the languid waters of the creek below.

Another beautiful resting spot by the creek at the Grasshopper Point Picnic Area was ours for the taking, and we took another rest break there, before we traversed along the shady Allens Bend Trail to the Casner Canyon Trail, where it meets the creek.  This part of the trail leads you along a shady ledge with a rock shelf on one side and with what appears to be the remnants of old irrigation pipes on the other side, a reminder of an earlier era and its settlers.  Finding the trail back up and out of the canyon proved to be a little tricky, but our fearless leader was clearly up to the task.  We backtracked a bit along the Allens Bend Trail and looked harder for the route back up to our cars.  (I hear those new trail apps for your smartphone can come in handy for such a situation, but I have not tried them.)  Our total hiking distance was three and one-half miles, with an elevation gain of five hundred feet.  Our hiking time was about two and one-half hours and was much enjoyed by all.

If you are interested in joining the club, please visit the Sedona Westerners website at www.sedonawesterners.org/membership.  You are invited to our next monthly meeting at 7 p.m., Thursday, November 8, at the Sedona Methodist Church, 110 Indian Cliffs Road.  Written by Beth Caparelli.