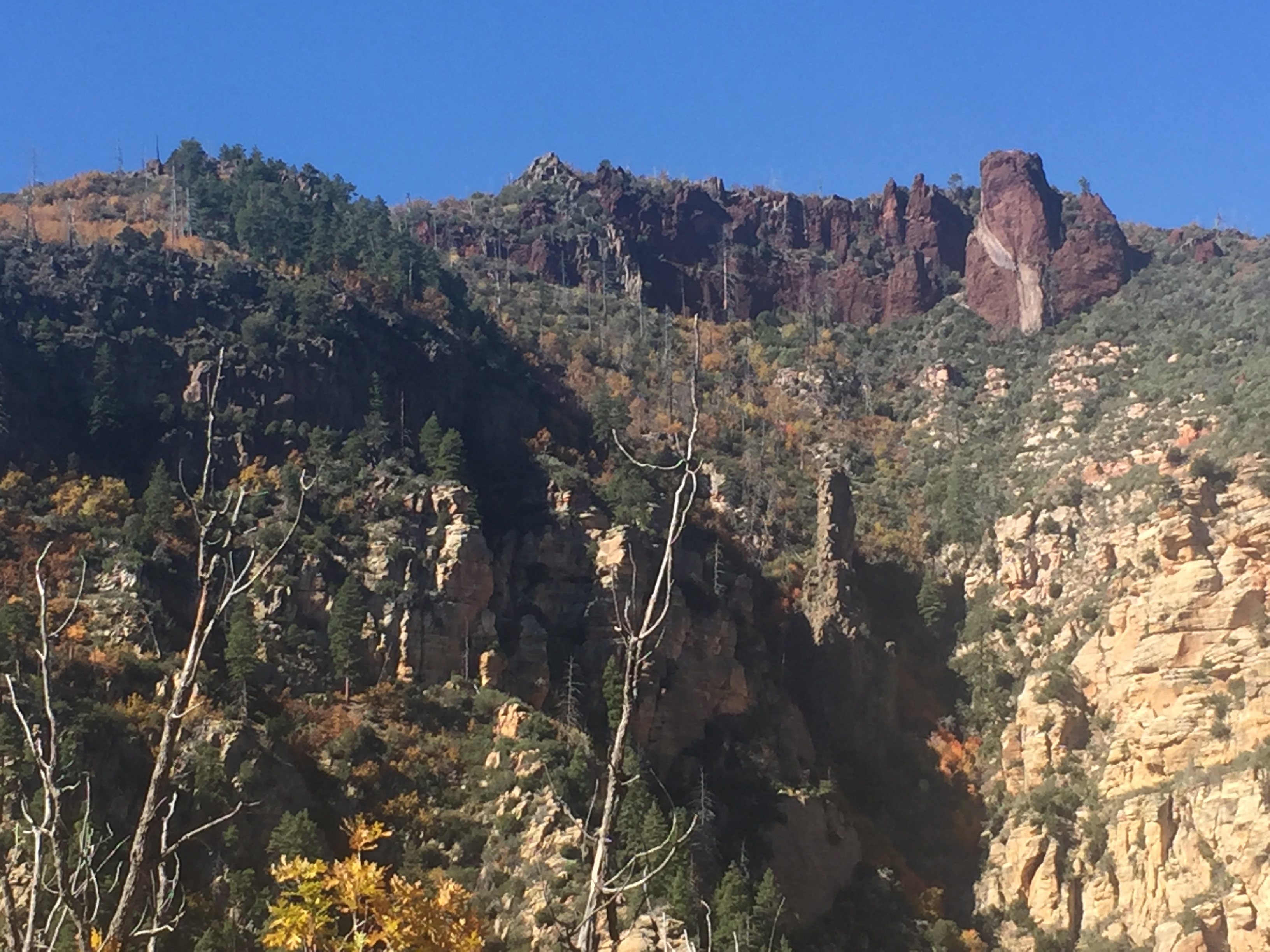 The Wilson Mountain summit as viewed from the North Wilson Trail. The dark vertical mass in the upper right is the vent out of which lava flowed and covered Wilson Mountain. The gray streak across the vent was a feeder dike for the lava.

The Sedona Westerners' Thursday hiking group, the Mustangs, recently hiked the North Wilson Trail to reach the both the Wilson Mountain First Bench, as well as the summit.  It turned out to be an 8-mile hike round trip with 2,600 feet of cumulative elevation gain.  We met at Posse Grounds Park in West Sedona and drove up SR 89A to the Encinoso Picnic Area, where the trailhead is located.

The trailhead, at 4,600 feet, is on the side of SR 89A/Oak Creek Canyon.  We hiked in two groups; Ernie Pratt led one group and Don Kling led the other.  Starting up the dirt trail, we soon found ourselves in a side canyon heading toward Wilson Mountain.  The trail started out exposed to the sun, but soon we were in a forest that grew thicker as we hiked, and before long we were among Ponderosa Pine and Douglas Fir trees.

Once we hiked deeper into the side canyon, we saw the first fall color.  The Big-Tooth Maple and the Sumac were starting to turn red.  The Gambel Oak trees were turning yellow.  Naturally, we took pictures, since this was the first fall color we had seen this year.  The fall color just made what was already a pleasant hike through the forest, even more delightful.

Soon we reached a series of switchbacks on the trail, designed to help us reach the 2,400 feet of elevation gain between the trailhead and the summit.  They were steep, but we moved upward at a regular pace, with occasional stops for catching our breath.  The groups ascended single file and upon reaching the First Bench, both groups stopped for a snack break and a photo op.  We could see the snow-capped mountains of the San Francisco Peaks, in addition to close up views of the top of Wilson Mountain.  Fortunately for us, one of our hike leaders, Ernie Pratt, is a retired geologist and he was able to interpret the volcanic features that we could see.

On the way up the mountain, we had hiked past the red rock Schnebly Hill Formation and the white rock Coconino Sandstone.  Now that we were on the First Bench, we could clearly see a layer of basaltic lava capping the mountain.  Ernie pointed out to us an unusual feature that he said was the vent through which the lava emerged and spread out across the mountain and sedimentary layers below.  As we studied the reddish rock of the vent, we could see a gray layer running diagonally across it.  Ernie then told us that was a feeder dike, that fed magma to the vent, where it spewed out as lava.  Ernie also told us that the lava flows on Wilson Mountain and north to the Flagstaff area, were approximately one to six million years old.  We took pictures of the vent and the dike before continuing on to the summit.

Once we hiked across the First Bench, we reached a trail junction where the North and South Wilson trails meet, before combining into one trail that reaches the summit.  We continued up the trail and at the top, there were two choices of scenic overlooks to which you could hike.  You can hike to the farther away North Canyon Overlook or to the closer Sedona Overlook.  We chose the Sedona Overlook and shortly thereafter, we arrived on the south side of the mountain with a superb view of Sedona and all of its surrounding rock formations.  We ate our lunch at the edge of the mountain and took many pictures of the stunning panoramic views.

After lunch, we headed back and enjoyed once again seeing both the geologic features and the fall color on the way to the trailhead. When we finished, we all felt satisfied that we had once again gotten out in the mountains and the forest to enjoy some of the best of what the Sedona area has to offer.

If you are interested in joining the club, please visit the Sedona Westerners website at www.sedonawesterners.org/membership.  You are invited to our next monthly meeting at 7 p.m., Thursday, January 10, at the Sedona Methodist Church, 110 Indian Cliffs Road.  Written by Jeff Fargo.