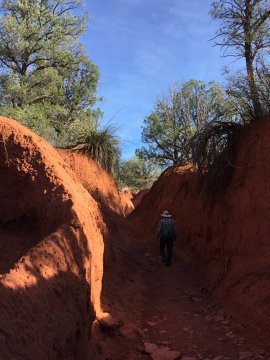 A Sedona Westerner hiker can be seen hiking through the very narrow Canyon of Fools trail, located off Boynton Pass Road. The trail in the ravine is used by hikers and mountain bikers, but caution is required if there is any chance of rain.

On a cool, mostly clear morning, members of the Amblers hiking group of the Sedona Westerners Hiking Club assembled at the Posse Grounds Park for a hike through the Canyon of Fools, Mescal, and the Yucca trails Loop.  After signing in and a check for proper footwear, we carpooled to the trailhead off Boynton Pass Road.  Originally developed by mountain bikers, the Canyon of Fools trail is now officially designated and maintained by the U.S. Forest Service.  We separated into two small groups and there really shouldn’t be larger groups on this hike, as the Canyon of Fools is so narrow.  About half of the trail in the Canyon of Fools is a rocky creek bed.  Luckily, the creek bed was dry for our hike and it was an easy, mostly flat hike as the creek bed twisted and turned through the high-walled canyon, becoming very narrow at some points.  It was fascinating terrain, since we could see how erosion had carved side canyons and exposed tree roots.  I certainly wouldn’t recommend this trail during the monsoon season!

After about a half mile, the trail gradually opened up at the junction with the Yucca trail and we made a right turn to follow the Yucca trail, which loops around for another half mile or so and connects with the Mescal trail.  Along the way, we saw a variety of desert vegetation from low growing groundcover to the beautiful Ocotillo, which is not a cactus, although it has lots of spines.  It is a shrub and will photosynthesize.  We were surprised at how many plants were blooming at that time, which was probably due to the recent rains.  There were some fabulous views from the Yucca trail in almost every direction, but especially east toward Devil’s Bridge and south to Thunder Mountain.

We followed the Mescal trail around Mescal Mountain for a bit and took a short break with breathtaking views into Boynton Canyon, after which we continued around Mescal Mountain, which is an enormous red sandstone butte that looks like “a ship at sea,” according to one of our hikers.  Along the Mescal trail we met several groups of hikers, as well as mountain bikers, who were also out to enjoy the beautiful morning.  As the trail went around the western side of the butte, we stopped for a few minutes to enjoy the views into Boynton Canyon and of the Enchantment Resort.  Then we came to the point where Mescal trail connects with the Canyon of Fools trail and we followed that to return to the trailhead.

Our hike was a total of three miles with total elevation gain of about 400 feet.  We completed the hike in about two and one-half hours.  It was a short, but interesting hike.  Perfect for us Amblers, but I would not recommend this hike for a weekend day, due to its mountain biker usage and the narrow trail.  The leaders and tailgaters did a great job of keeping our groups together and we didn’t lose a single hiker!

If you are interested in joining the club, please visit the Sedona Westerners website at www.sedonawesterners.org/membership.  You are invited to our next monthly meeting at 7 p.m., Thursday, January 10, at the Sedona Methodist Church, 110 Indian Cliffs Road.  Written by Ann Holland.