Looking Inside a Volcano 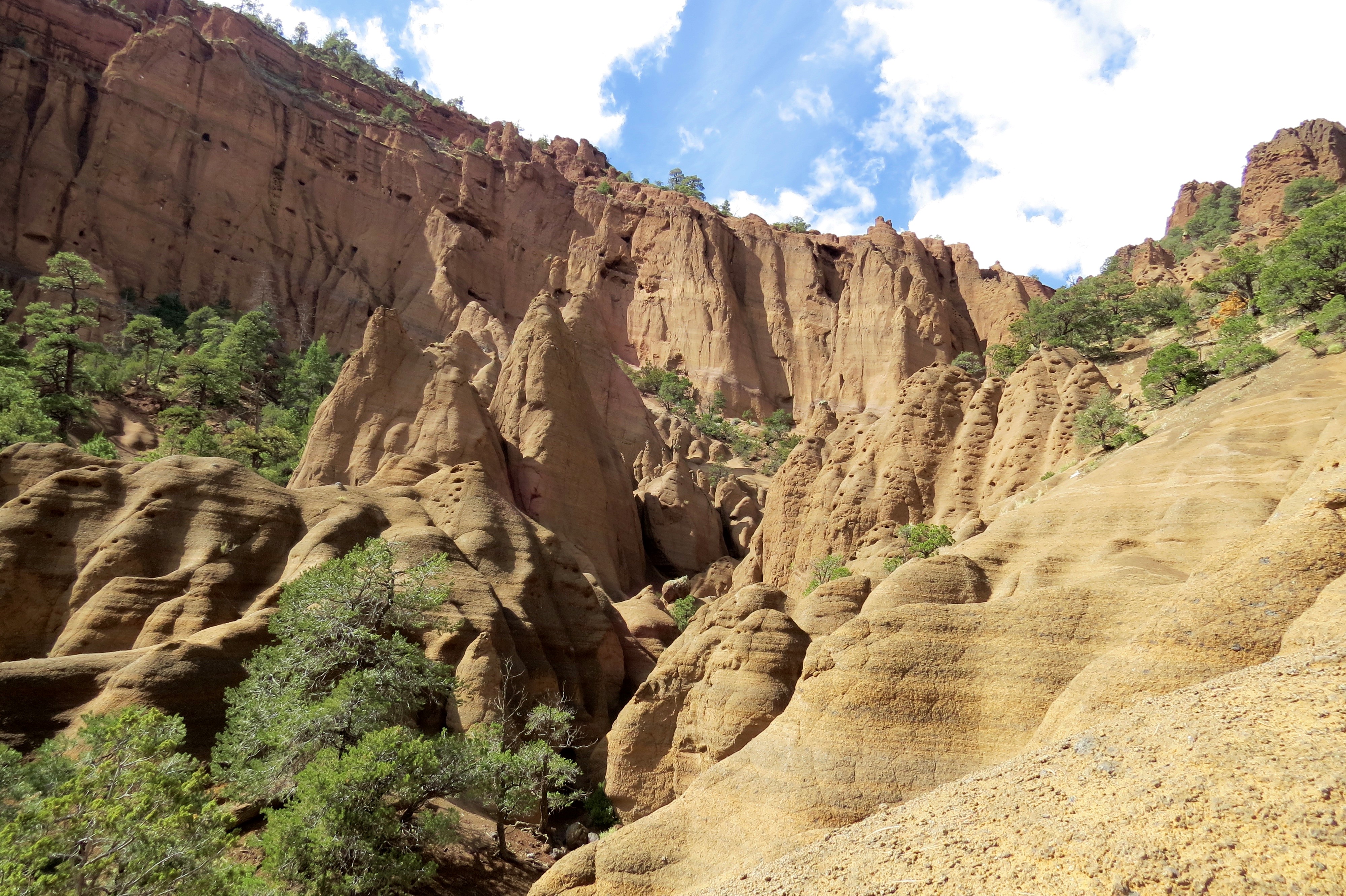 This photo of the Red Mountain amphitheater clearly shows the hoodoos and the Tafoni weathering (holes in rocks) that are characteristic of semi-arid areas. Red Mountain is a 740,000 year-old volcano located north of Flagstaff.

The Trackers are a hike and learn group, part of the Sedona Westerners.  Recently we drove north of Flagstaff to study a uniquely portrayed volcano called Red Mountain.  According to NAU geologists, N.R. Riggs and W.A. Duffield, this 740,000-year-old volcano, “represents the formation of a Strombolitic scoria cone along a Proterozoic steeply dipping normal fault with sector collapse and rafting, resulting in a final stage of low fountaining and clastogenic lava flows, along with a phreatic blowout and is currently subject to water and wind erosion.”  Given that description, at least one member of our hiking group from Missouri said, “show me,” so off we went.

At the trailhead, we learned about the position of this volcano within the 1,800 square mile San Francisco Volcanic Field and were exposed to the rocks we might encounter during this hike.  When we reached the streambed, we immediately noticed one of the many unique features that typifies this volcano.  On this bright sunny day, the sand in the wash fairly sparkled with what turned out to be dark crystals of resorbed amphibole and pyroxene, not the so-called Apache Tears.  There were also some less common xenocrysts of feldspar.

From that point onward, hiker focus greatly suffered as we moved up the trail searchingly bent over or on our hands and knees, always trying to find that bigger and better crystal.  The various geographic features were brought into play; the high cliff far above us was actually the rim of the caldera, facing away from us in a horseshoe pattern to the west.  It turns out that we were actually entering the side of the volcano, into what is locally called the amphitheater – the result of an ancient steam blowout.  Part of our group experimented with trying to walk up a nearby lapilli (cinder) covered trail, but with little success.  We then walked through the lava field into a tuff-based wonderland.  After considerable jaw-dropping observations and some discussion, we quickly agreed with the geological experts, it sure looked like a phreatic blowout to us.

We briefly paused our geological endeavors to listen to a knowledgeable member of our group describe how a number of Peregrine Falcon pairs nest in these high cliffs, breeding from late March through May.  This bird of prey has adapted to a wide range of environments worldwide, including cities, but is still limited in numbers.  Arizona is fortunate to have this naturally developed area, which is ideal for breeding and hunting.

Nearby, we climbed to a slightly higher viewpoint in order to get a good look at a number of hoodoos.  More resistant blocks (volcanic bombs) of varying sizes, cap and protect the underlying, softer tuffaceous rock from erosion, thus forming these pinnacle-shaped towers.  It is a bit like a fairyland.  Further into the amphitheater, natural sculpting surrounded us as if by design testing our imagination.  We wandered briefly, aimlessly up deeply-incised gulleys noting the Tafoni weathering, large dense volcanic blocks caught up in altered tuff layers, and yet more hoodoos, some just beginning to form.

After lunch, we reluctantly left this geological wonderland and returned to the trailhead.  On the way back to Sedona, some of the group stopped and hiked at nearby Slate Mountain, an intrusive dome, and not the more common, cinder cone type volcano.  This trail is highly rated and affords 360 degree views, from the Grand Canyon to the snow-covered San Francisco Peaks.

If you are interested in joining the club, please visit the Sedona Westerners website at www.sedonawesterners.org/membership.  You are invited to our next monthly meeting at 7 p.m., Thursday, January 10, at the Sedona Methodist Church, 110 Indian Cliffs Road.  Written by Ernie Pratt.