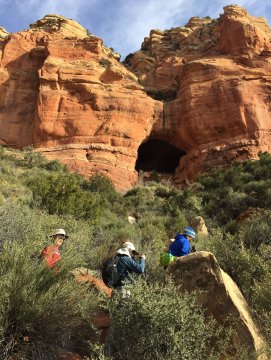 The Rustlers hiking group of the Sedona Westerners is approaching the local phenomenon known as Keyhole Cave. The shape of its entrance resembles an old fashioned keyhole. Keyhole Cave is located in the rocky ridge running from Coffee Pot Rock toward Thunder

Recently, the Sedona Westerners’ Rustlers hiking group on Saturday morning went on a hike called “3:10 to Keyhole” to hike to Keyhole Cave, which is located in the rock face behind Coffee Pot Rock.  The famous Western movie, “3:10 to Yuma,” was actually filmed in this specific area.  As soon as I found out that the hike was about 3.1 miles roundtrip, with a 500-foot elevation gain, I knew that any hiking challenges would not be due to either the vertical or horizontal distance covered.  This was a Rustlers hike, a step up from the easier Amblers ability group, so there would clearly be some other challenges in order to reach that goal.  At the Posse Grounds meet-up point, we compressed the enthusiastic group into as few cars as possible and quickly headed to the limited parking at the Sugarloaf Trailhead in West Sedona.  All along the trail, the red rock views were great, as always.  It was cold, but sunny, and quite comfortable hiking weather.  We started out on the Sugarloaf Loop trail, but once we got close to Coffee Pot Rock, we had to hike in a dry wash that was filled with the usual assortment of rocky debris, making the footing tricky in many sections.

The first portion of the hike up the wash was a steady grade with lots of rocks to step on, around, and over.  The latter portion of the hike up to the Cave, however, was mostly steep with lots of tricky, tall rock steps.  Large portions of our path were substantially enclosed by spiky Ephedra bushes, and Cats Claw, which were grabbing and stabbing at our clothing.  Due to the rock steps, and the spikes, hiking gloves were largely necessary.  Hiking poles were quite helpful in the lower sections, but once it got steep, we needed both our hands and feet for climbing over large rocks.  Friction holds were necessary to finally get up to the entrance of Keyhole Cave.

Once we managed to get up on the ledge at the mouth of the cave, we were treated to a superb view, including Cathedral Rock, Bell Rock, and Courthouse Butte.  Keyhole Cave actually has a large, high entrance, with an upper ledge about halfway up to the top of the cave, which requires climbing up into the cave, but we stayed at the main ledge at the entrance.  A group of “youngsters” from Phoenix were enjoying their rope-assisted climbing into the cave.  We enjoyed our snack break there at the entrance, while looking out at the view and swapping stories of other hikes in other places.  After the break, it was all downhill, with several areas where it was steep enough that some folks chose to do the “butt slide” descent.  (This is a very good reason to wear rugged hiking pants that aren't easily damaged.)  The First Aid advice that we had received from the guest speaker at our recent monthly meeting, was spot on for dealing with Prickly Pear spines and minor abrasions along the way.

Once we were back down to the wash, our footwork focused on navigating the rocks, and poles became useful again.  I found this hike quite challenging, due to the amount of rock hopping, and the friction holds necessary to get to the ledge at the entrance of the cave.  I think we all concluded at the end of the hike, though, that it was a valuable experience and an enjoyable adventure overall.

If you are interested in joining the hiking club, please visit the Sedona Westerners’ website at www.sedonawesterners.org/membership.  You are invited to our next monthly meeting at 7 p.m., Thursday, March 14, at the Sedona Methodist Church, 110 Indian Cliffs Road.  Written by Arthur Hicks.