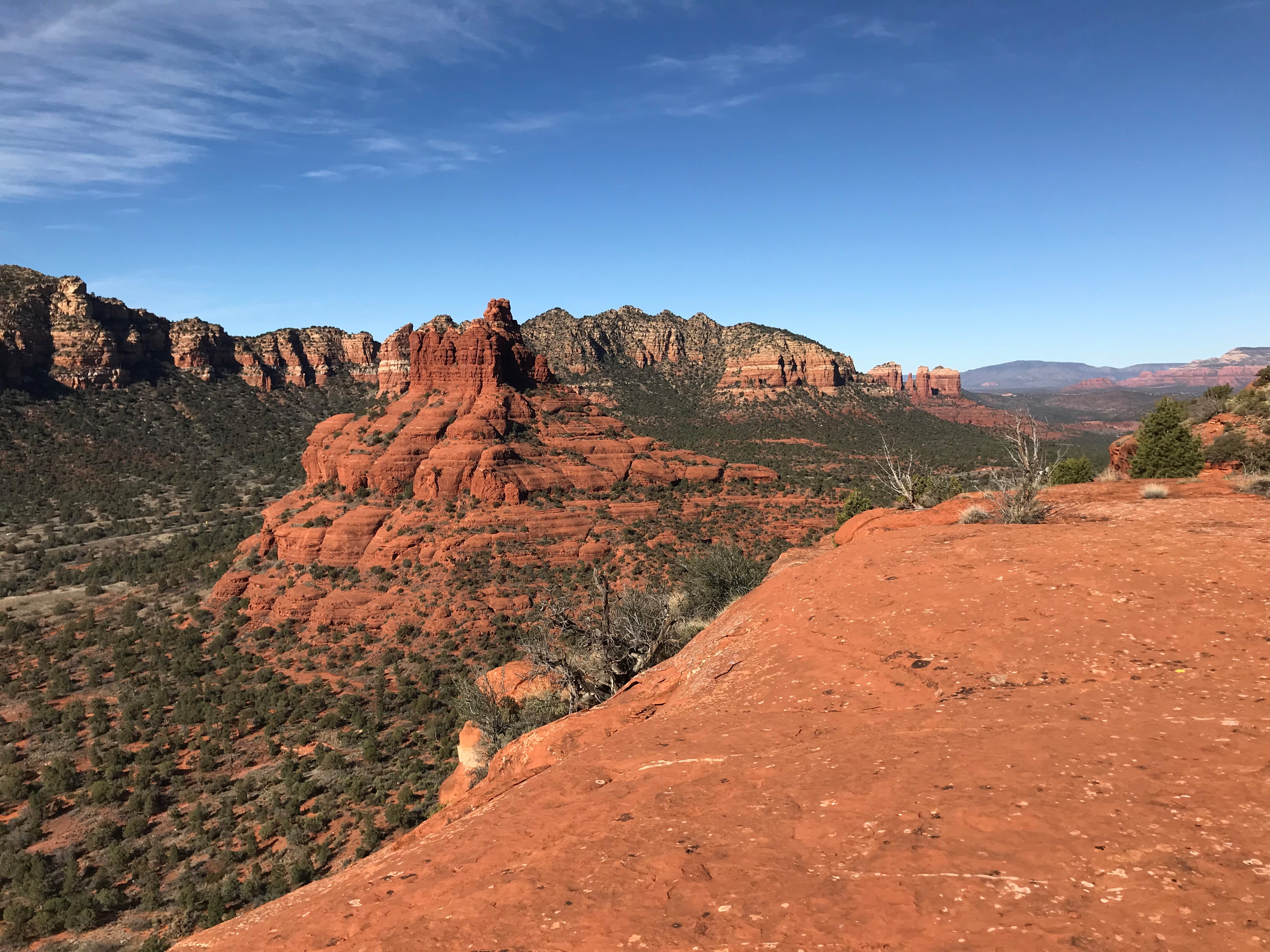 Sedona Westerners had this close-up view of Bell Rock from a red rock vista point on the southwest side of Courthouse Butte. This view can be accessed by hiking on the Courthouse Butte Loop Trail. Cathedral Rock can be seen to the right of center and the Sev

On a cool, sunny, and beautiful Sunday morning, the Drovers hiking group of the Sedona Westerners hiking club, led by the incomparable Cleo Duardo and confidently assisted by Ray Laporte as tailgater, took to the trail for a circumnavigation of Courthouse Butte.  The official name of the hike was, “Courthouse and More.”  You may be asking yourself, what about the “and More”?  Hold on there, buckaroo, all in good time.  The trail began from the Courthouse Vista parking area and we headed southeast and skirted between Bell Rock and Courthouse Butte on the relatively new Rector Connector Trail.

We then took the Courthouse Butte Loop Trail for a while, before briefly leaving the trail for some outstanding views on the southwest side of the butte.  We hiked up a steep, rocky chute that emerged into a small prickly pear forest and then opened out onto a red rock plateau on the southwest corner of Courthouse Butte.  The views from the plateau were magnificent, looking straight across to Bell Rock and beyond, to the Seven Sisters ridgeline and Cathedral Rock in the distance.  We rested here for a while and enjoyed the quiet, still air and the morning sunshine.

After a brief respite, we went back down the same rocky chute and then headed east, continuing counterclockwise while circumnavigating Courthouse Butte.  This portion of the hike required traversing a couple of ledges, all the while receiving verbal support from our leaders, along with the admonition to “Trust Your Boots.”  I may be mistaken, but I think after you have been a member of the Sedona Westerners for ten years, you are allowed to get a tattoo saying, “Trust Your Boots,” if you are so inclined.  Soon we descended the side of the butte, at a place marked on the face of the rock by a large area of fallen rock, shaped like an arrowhead, and got back on the Courthouse Butte Loop Trail.

We followed the trail as it continued around the butte, taking a brief detour to climb on top of Muffin (aka Spaceship) Rock for the always much enjoyed views of Cathedral Rock and Rabbit Ears.  Here, we were delightfully surprised by peppermint chocolate treats handed out to the group by our leader, Cleo.  We then made our way back to the parking lot.  The hike distance was 4.75 miles, with a cumulative elevation gain of 1,070 feet.  We had enjoyed each other’s company on the hike so much, that we opted to continue together for a late lunch at the Red Rock Cafe, where nine of us were unable to finish the giant cinnamon roll that Mark generously provided us for dessert.  Truly, it was a wonderful day.

A little personal perspective -- I have been a Sedona Westerner for about a year and I am still getting used to hiking on ledges.  I am getting more comfortable with them by being around supportive, experienced hikers, and they are much easier to deal with when you see several people in front of you cross them.  So, if ledges make you feel a little squeamish, you are not alone.  The Sedona Westerners can help you discover your safe and reasonable limits and allow you to get more out of hiking in our beautiful part of the world.

If you are interested in joining the hiking club, please visit the Sedona Westerners’ website at www.sedonawesterners.org/membership.  You are invited to our next monthly meeting at 7 p.m., Thursday, March 14, at the Sedona Methodist Church, 110 Indian Cliffs Road.  Written by David Cox.