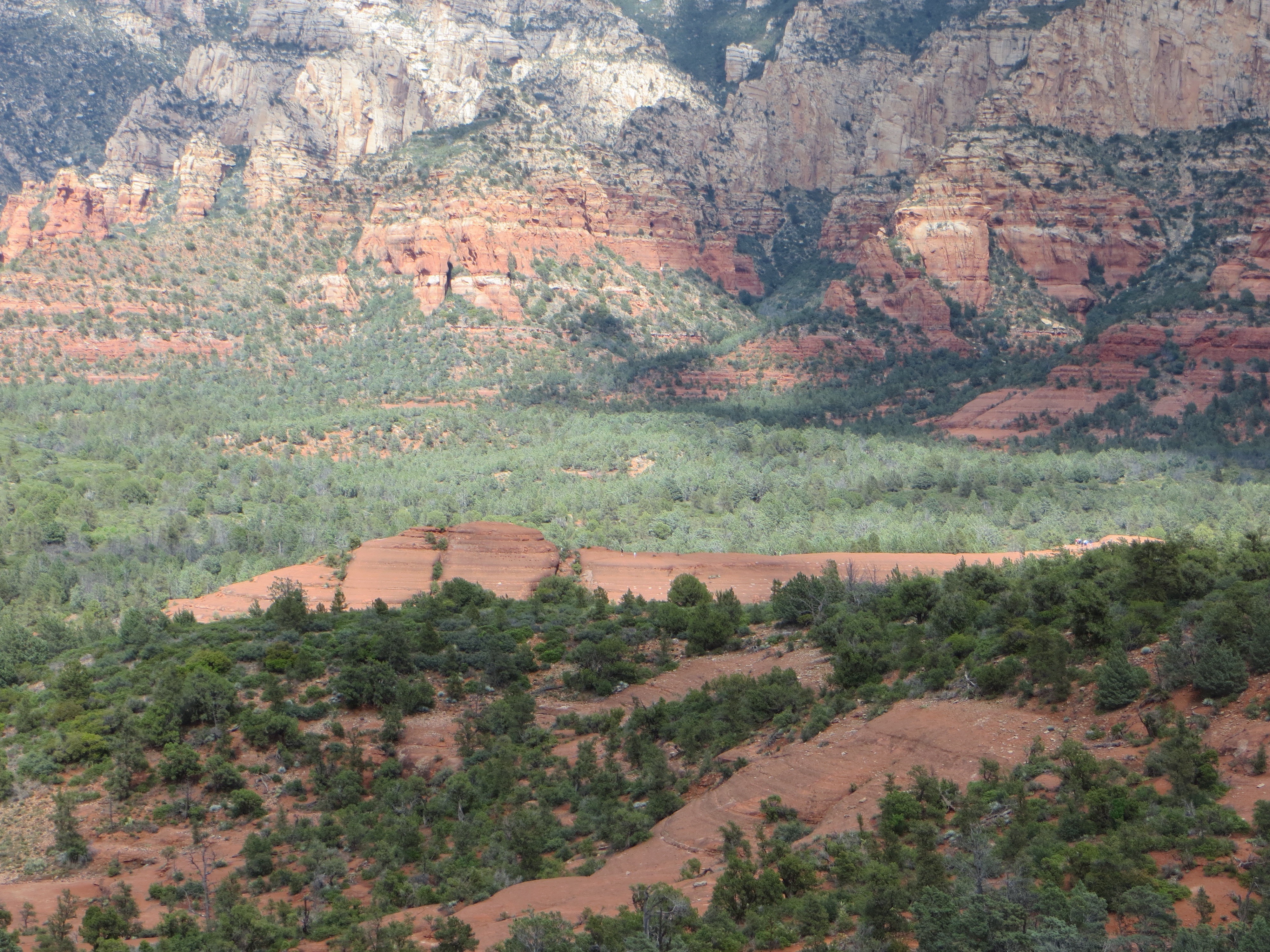 Submarine Rock can be clearly seen in this photo taken from the Broken Arrow trail. The Sedona Westerners recently had lunch on top of Submarine Rock, while hiking on 9 different trails in this area. Photo by Bert McLean

The sky was a stunning western blue with no clouds in sight as twenty-four smiling and eager hikers headed north on the Mystic trail.  It was the first hike in ten days for the Sedona Westerners Hiking Club.  The Sedona weather had been unusually snowy and wet since December, compelling the club to cancel many hikes and to remain off the trails, thus allowing them to dry out.

The official hike was known as Twin Buttes/Submarine Rock, but affectionately called the “Hike of the Nine Trails,” by this author.  After dividing into two groups, the first led by Kris McLean and the second group led by Cleo Duardo, we were off to explore the nine different system trails as we circumnavigated the Twin Buttes rock formation from the Mystic trail to the Chapel trail.  We would be entering the impressive Munds Wilderness area by hiking on the Hog trails and then on to Submarine Rock and Chicken Point.  Our trusty hiking boots would propel us over 6.5 miles and 900 feet cumulative elevation gain.

As we hiked along, climbing up onto the breathtaking views of the Hog trails, we were regaled by the stories of a fellow hiker who is also a member of the local Search and Rescue team.  He shared his training tales with us, as to how to safely climb out of a hovering helicopter and mountain rappelling skills.  He also shared some harrowing stories of night time rescues in the Sedona area.  We are pleased to have a handful of members of our hiking club that also volunteer with the Search and Rescue team of Yavapai County.

We had several new club members with us on this hike, who enjoyed having various rock formations, rock strata classification names, and the classic western “Broken Arrow” movie site pointed out to them.  Of course, we also gave them the ever-popular hiking advice, “Trust Your Boots.”  After descending the Hog trails onto the Twin Buttes trail and then onto the Broken Arrow trail, we briefly stopped at the Devil’s Dining Room sinkhole, one of seven sinkholes that surround the city of Sedona.  From my reading, I learned that these sinkholes occur in the bedrock of three Permian-age sandstone layers, the causative source being the collapse of subsurface water-filled caves.

As we continued on our trek toward Submarine Rock, another seasoned member of the hiking club shared with us that he had taken rock climbing in college, in the Pleistocene Era, his words not mine.  Comparisons were made with the latest advances in rock climbing equipment, clothing, and techniques.

Arriving at Submarine Rock, we scrambled up a narrow chute and ascended three tiers of slickrock to the top tier.  Here we ate our lunches and shared brownies and cookies, while enjoying the impressive 360-degree views of the distinctive rock formations: City Hall, Cockscomb, Chimney Rock, and Thunder, Wilson and Bear Mountains.  After the relaxing break, we made our way up to Chicken Point.  There we observed two mountain bikers pushing their bikes up to the celebrated “White Line.”  We hung around for a few minutes to see if they were going to treat us to a daredevil bike ride along the “White Line,” but it appeared they had second thoughts after walking out a short distance onto the “White Line.”

Disappointed, we continued on our trek to the last and most fun event (a few of our hikers disagreed), descending a very narrow twenty-foot chute. It was quite a sight to watch the hikers smashed tightly against the rock walls, forced to turn sideways to fit through the cramped passageway.  Some of the comments made while descending the chute were quite colorful.

We then proceeded down the Little Horse trail to the trailhead, where we reached our final and ninth trail, the Chapel trail.  We were treated to outstanding views along the trail of Cathedral Rock, Bell Rock, Pyramid Rock, Seven Sisters, and Court House Butte as we returned to the Mystic trailhead.  We finished the hike all commenting to each other on what a great day it had been, outdoors on the Sedona trails.

If you are interested in joining the hiking club, please visit the Sedona Westerners website at www.sedonawesterners.org/membership.  Written by Kris McLean.