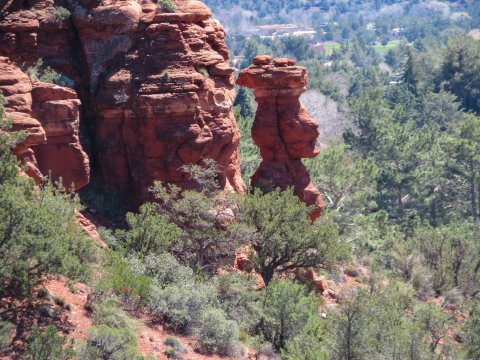 This rock formation, known as the Mayan Maiden, is located on the edge of the Village of Oak Creek, near Castle Rock and the Transept Trail. This photo was taken by the Rustlers hiking group of the Sedona Westerners Hiking Club, who were hiking on the nearby

In 2018, the U.S. Forest Service added approximately 35 miles of hiking and mountain biking trails to its official system of beautiful trails in our scenic Red Rock Country.  Some trails were created to serve new areas and others were user-created trails which were adopted into the system.  Adoption of user-created trails directs hikers and mountain bikers into a single path and discourages off trail uses which damage sensitive soils.  Adoption allows the U.S. Forest Service and volunteers to provide good signage, clear downed trees, minimize erosion, and maintain a healthy trail system.

On a recent, beautiful Spring day, the Rustlers hiking group of the Sedona Westerners set out to hike one of these newly-incorporated trails, the Transept Trail.  The Transept Trail connects Verde Valley School Road with the Hiline Trail.  It runs along the "back side" of the chain of peaks (AKA the Seven Warriors) located across Highway 179 from Bell Rock and Courthouse Butte, near the Village of Oak Creek.

Beginning at a dirt parking lot on Verde Valley School Road, the Rustlers started by getting most of the day's climbing out of the way.  This would take an hour, but once done, the hikers would find a trail that had lots of morning shade as it wandered in and out of side drainages, keeping more or less at the same elevation.  At one point, we passed a rock formation known as the Mayan Maiden.  A little imagination is helpful in seeing the rock as a Mayan Maiden.

Along the trail, we had very little company as we enjoyed the soaring cliffs of the Seven Warriors to the east and, looking away from the cliffs, spectacular views of Cathedral Rock.  In the distance were Thunder Mountain, Bear Mountain, and just about everything in between.  We were fortunate that the trail had dried up from the recent heavy rains, but the moist soil was encouraging the appearance of greenery which would soon be in bloom.

At about 3 miles from the start of the hike, we began a series of switchbacks which would take us up to our junction with the Hiline Trail and, a little further up, to our snack break spot.  The snack break spot had been carefully selected by our leaders, Jim Sweeny and Ray LaPorte, to provide stunning views with rustic seating and a chance to chat with a few amiable mountain bikers, before they set off on what seemed a certain calamity.  Some minutes after leaving us and heading down, every single one of them, or their ghosts, appeared far below us on a distant section of the Hiline Trail.

After a delicious dessert, catered by Jim and Ray, we returned to our starting point on Verde Valley School Road by the same route, the Transept Trail.  In total, we did about 950 feet of climbing over a distance of 7 miles.  Thanks were given to our leaders, Jim and Ray, and to tailgaters Sophia Sweeny and Don Kling, for such a safe hike on a lovely day.

If you are interested in joining the hiking club, please visit the Sedona Westerners website at www.sedonawesterners.org/membership.