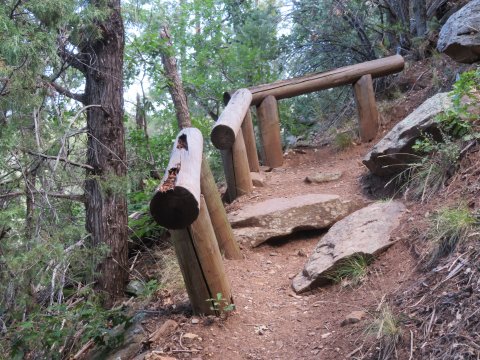 On a Sunday early in the new hiking season, the Drover group of the Sedona Westerners headed for Harding Springs, high above Oak Creek Canyon.  Many features of this hike made it the perfect choice.

First, summer was having a hard time letting go of Sedona and an Oak Creek hike is always a bit shadier, a bit cooler.

Second, the Whiskey Fire had brought smoke down into town so going up seemed like a decent idea.

Third, the hike goes up and up, but only for the first mile, making it a good warmup for hikes to come, especially for those who weren’t able to get out much in the hot months.

Fourth, there’s a lot of history surrounding the Hardings.  More on that later.

At our 8 AM meetup at Sedona’s Posse Grounds, new members were introduced and veteran members shared greetings and accounts of the “what I did last summer” variety. These conversations would spill over onto the trail.

The Harding Springs Trail itself is easy to follow and moderately steep.  Many in the group used hiking sticks, which in this terrain are as useful on the downhill as they are going up. The leaders kept to an easy pace, so there was time to notice things.  First off, there was lots of shade provided by some very healthy ponderosa pines.  These benefitted from a thinning  project some years ago, which gave an open feeling to the forest.

About a half mile up is a series of hitching posts on the downhill side of the trail.  These seemed a mystery to everyone.  Why here?  What on earth would you be doing while your horses were hitched here, as the main thing to do here is either go up, or go down. Were they put here by the Hardings?

Colonel Harding was one of many settlers who came into the Sedona / Oak Creek area from the aftermath of the Civil War through the end of the 1800’s.  Some settled in the canyon itself, taking advantage of the reliable water supply and occasional flat areas suitable for fruit orchards.  Col. Harding was one of these men, and he farmed land in the Cave Spring area.  The hikers noticed that, not far from where we parked the cars, apple trees from the old days were bearing this season’s fruit.  According to author Jean Kindig, the Harding Springs Trail was actually built by a previous settler named Robinson, who needed a pack trail to get supplies between the canyon and the Mogollon Rim, but Harding no doubt used it too. History is silent on who put up the hitching posts.

On this day, it was the Sedona Westerners who went between the Canyon and the Mogollon Rim, reaching the Rim after about 800 feet of climbing over a little more than a mile.  The leaders took us to a magnificent overlook where we had a break before heading out over relatively flat “rim country”.  Along this stretch of trail the hikers passed Harding Springs itself.  Geologists often refer to a spring as “a leak in the aquifer”.   In the case of Harding Springs, the leak has been plugged, as today’s Harding Springs is bone dry.

The hikers continued along the rim to a second overlook, where we broke for snack and enjoyed the views down the canyon.  In the distance, at the Sedona end, was the smoke we’d left behind a few hours ago. The snack spot was also the turnaround point for the hike, and we were taken back the same way by leaders Dave Vanderwater and Don Kling.  Round trip the hike was four miles long with a thousand feet of climbing along the way.

If you are interested in joining the club, please visit the Sedona Westerners website at www.sedonawesterners.org/membership.  You are invited to our next regularly scheduled monthly meeting at 7 p.m., Thursday, November 14, at the Sedona Methodist Church, 110 Indian Cliffs Road. (Photo by John Losse)