KENDRICK PEAK RISES FROM THE ASHES ONCE AGAIN 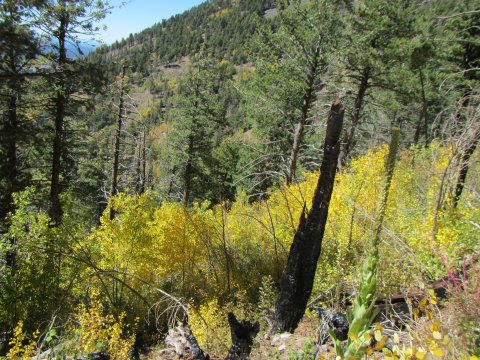 At 10,400 feet, Flagstaff's Kendrick Peak is the 8th tallest point in Arizona.  It is a solitary mountain, ten miles to the west of the more famous San Francisco Peaks, and as such it attracts far fewer visitors.  Kendrick has fallen on hard times recently, having been at the center of devastating wildfires in both 2000 and 2017 that significantly damaged it's pine, fir, and aspen-covered slopes.  The 2017 fire resulted in prolonged closure of the hiking trails to the summit but after a tremendous effort by the USFS and volunteers these trails are open once again, allowing the Sedona Westerners Hiking Club a chance to revisit a perennial favorite.

Before the fires, early October was always the perfect time to attempt the Kendrick Trail (9 miles, 2700 foot ascent) to the summit.  The aspens were in full color, there were still scattered wildflowers everywhere, and the air was usually clear enough to enjoy the expansive 360-degree views from the top.  How much of that beauty had been destroyed by the smoke, ash, and flames?  The Westerners had to see for themselves, so last week the Mustang hikers, led by Clint and Louise Gelotte, followed the Kendrick Trail to the summit.

Sometimes prayers are answered.  Occasionally the cosmic gears mesh and something wonderful happens; from the very first steps up the trail it was clear to the Westerners that, not only had Kendrick Peak not been destroyed by fire, but on this day it was more beautiful than ever before.  The fire had destroyed many trees, but this had opened up dramatic views and allowed huge grass and flower-filled meadows to thrive.  Young aspens were growing everywhere, brilliant red and yellow, and thousands of the largest fir trees had survived and still peppered the mountainside.

Ironically, at the top of Kendrick stands one of the oldest fire-watch towers in the state.   Although it was unmanned at the time of this visit, on previous occasions the officer on duty has always invited hikers up into the tower for an educational tour.  Built in the early 1900s, the tower is paired with a small cabin located 400 feet below that was used for lodging.  This small cabin is considered the oldest surviving Forest Service structure in Arizona, and during the 2017 fire volunteers risked their lives to wrap this cabin in fire-retardant material so that it might survive.  Like Kendrick, not only did it survive but it has since been restored to look better than ever.

Each and every Westerner hike is an opportunity to respect and appreciate the fragile beauty of nature, and sometimes it can be disheartening to find destruction, trash, graffiti, or simply the wear and tear of passing years.  Seeing how Kendrick Peak has rebounded from disaster, with a little help from people who cared, was a welcome reminder of what a special privilege it is to live here, and explore here.