Trackers Trek Through the History of the Grand Canyon 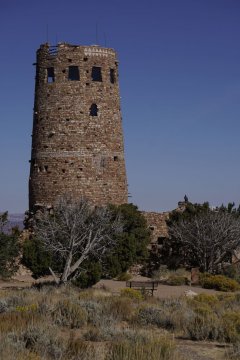 The Trackers group of Sedona Westerners began our tour of the South Rim with a stop at the Desert View Watchtower at the eastern end of the Grand Canyon.

Mary Colter, architect for the Fred Harvey Company, was in her 60’s when she designed the Desert View Watchtower. The Harvey Company needed a rest station-gift shop at the eastern end of the Grand Canyon for their site seeing tours. Colter wanted a structure that was in harmony with the Canyon as well as providing the widest view of the area. She spent six months visiting and studying Indian ruins in the southwest and concluded that a tower would be appropriate. To ensure that the Tour Guides interpreted the building as she wanted, she wrote a small handbook of one-hundred-pages. She titled it  the Manual for Drivers and Guides Descriptive of the Indian watchtower at Desert View and its Relation, Architecturally, to the Prehistoric Ruins of the Southwest. The tower was three years from conception to completion in 1933.

Fast forward 80 years later, damage caused by nature and human usage required a major restoration project. The project was started in 2015 with one floor completed each year in six-to eight-week segments. The last segment was completed in September of this year (2019).

We were given a tour of the exterior and portions of the interior by Ranger Grace and then left to enjoy the results of the four years of restoration. There were murals painted by Hopi Artist, Fred Kabotie in the Hopi Room. The two galleries above were painted by Fred Geary, with drawings from ancient kivas, caves and cliff walls. The main floor was restored to reflect an Ancient Kiva with a smaller bookstore. The restorations were beautiful! It was as if Mary Colter had just completed the tower; gone was the graffiti, salt deposits and cracked plaster.

Our next stop was a picnic lunch at Shoshone Point. We put on our hiking boots and trekked a mile to an amazing overlook seldom seen by the general public.

Our last stop was a private tour of the Kolb Studio given by Mike Buchheit, Director of Field Institute Grand Canyon Conservancy. Ellsworth Kolb arrived at the Grand Canyon in 1901.  Seeing the canyon, Ellsworth knew he was home. The following year his brother, Emery, who was pursuing photography as a hobby, joined him.  The brothers wanted to open a photography studio in the canyon.  It was only through perseverance and the help of Ralph Cameron that they were able to build their studio in 1904.

The studio/ home grew and expanded several times over the years. Emery married, had a child, and raised his family there. The brothers ran a very successful business as professional photographers. In 1915 they expanded the studio to include an auditorium. This allowed them to show their own motion picture, the first movie made of their trip on the Colorado River through the Grand Canyon.

We were able to tour the Kolb residence, which is seen on a limited basis. The residence was refurbished in 1998, but reflects Blanche Kolb’s (Emery’s wife) taste. We saw the living room, kitchen, dining room, bedrooms, parlor, photography workshop, darkroom, and the spectacular views from the porch and throughout the home. We even saw the window in which photos were taken of the mule trains going down into the canyon.

It was a delightful day and I must thank our Tracker Boss, Janet Johnson, for organizing our trip. And a special thanks to Liz Sweeney for making all the arrangements in the canyon.