The Beacon Becomes the Watchtower 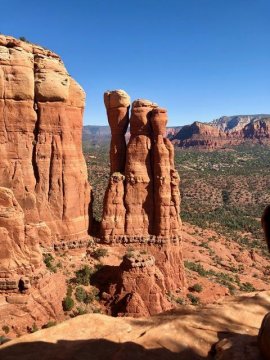 Virtually anywhere you go in Sedona you can see Cathedral Rock.  It’s a natural beacon during daylight.  That’s where a group of Sedona Westerners headed for a hike on October 29th.  Cathedral Heights was our destination – up to the top between the enormous blocks of rock that constitute the mountain.  Once there, it became our watchtower to see the entire Sedona landscape.

We started early, arriving before throngs of tourists packed the parking lot.  Easy Breezy trail was our starting point instead of the traditional route.  After about a quarter mile we were passing through a large prairie next to the rock.  Proof that the field was once farmed came when we passed a rusted car or truck bumper.  Someone wondered if the rest of the vehicle was underneath.  We didn’t pause to find out.

Then, the climb began.  Despite a wide age range of hikers, everyone kept pace with our  leader, Karen Larson.  Fortunately, she did provide “oxygen breaks” when the huffing and puffing rose to a noticeable level.  No complaints.  (Within the Westerners, hiking groups exist for various level of fitness and challenge.  The “Dogies” hiking group is the moderate group on this continuum.  This steep hike would not be on the schedule for some of the other groups.)

As we climbed up various trails, more and more of the surrounding mountains and rocks to the South became visible: Bell Rock, Courthouse, Rabbit Ears, Lee’s Mountain, Twin Buttes, and others.   Then, we began to climb into the center of Cathedral Rock.  The view was amazing.  We were actually looking down at three spires that are next to one of the bigger outgrowths of Cathedral Rock.  We could see for miles including the San Francisco peaks in Flagstaff!

The next phase of the hike was to circle around one of the peaks to get to the best known part of Cathedral Rock where many other hikers were resting.  One hiker pointed out where a lava dike is visible.  Apparently, Cathedral Rock was once the core of an ancient volcano.  The height difference between two of the major rock formations was also obvious, which indicates that a geological rift split the rock at some point in the past.   Another person recalled a tale about how a group of American Indians hid from U.S. Calvary by hiding at the peak back in the 1800’s.

Then the return descent began.  We stopped along the way to have snacks including some delicious brownies and cookies brought by fellow hikers.

Along the way someone spotted a non-native daisy plant growing between some rocks.  The seed must have been a gift from a passing bird.  Someone else saw a baby tarantula, which he protected from our hiking boots.  A couple of people had to stop briefly to pull out cactus needles -- the plants had rudely grabbed fingers along the trail.

And before we were ready to end the hike, the parking lot appeared and we were done.  Approximately four miles, 10,000 steps, and 69 floors of hiking was over.  But, the camaraderie continues even now – days after the hike took place.  And the memory of the 360 degree views of the Sedona area will be with all the hikers forever.