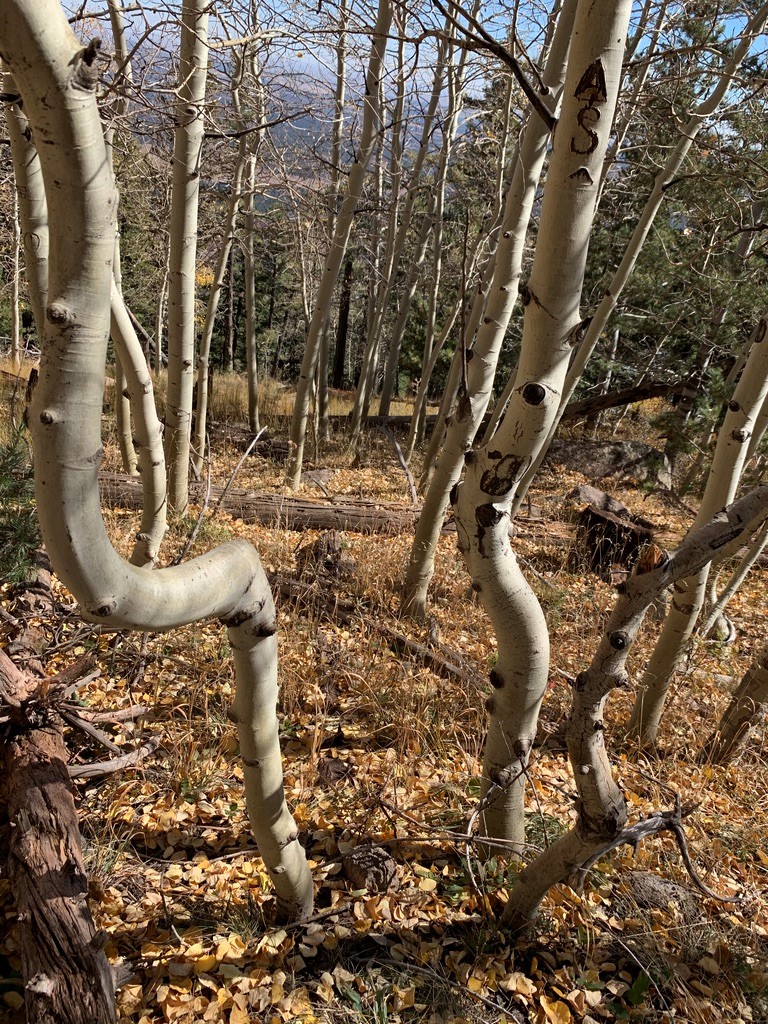 On Saturday, October 19, 2019 a group of enthusiastic Rough Riders loaded into our vehicles at 8am, to get an early start to Flagstaff.  Destination: Doyle Springs/Inner Basin. We arrived at approximately 9:30 am to gain access to the trail head.  To our disappointment there was already a lengthy stream of cars waiting to access the limited parking available.  Clearly we were not the only hikers in search of some evidence of the fall colors.  Hike Leader Brad Bell, co-lead Dave Kieres, and Cactus Dodger Jim Kemper were determined to ensure the mood of our hikers was not dampened!  A new hike that would include adequate distance, a challenge, magnificent views with fall colors and even a bit more elevation was agreed upon.  The patience and flexibility of the Rough Riders was evident as everyone was keen for just about anything. So off we headed to the Mount Elden Lookout trail!  We soon found ourselves at Mount Elden.

Mount Elden has a starting elevation of 6900’ and climbs 2400' to the fire lookout tower and is a 5.5 mile out and back trail.  Personally, I think that the elevation gain should translate into some extra mileage! Mount Elden is in east Flagstaff and was named after John Elden, an early settler who arrived in 1877.  The trail rises gradually, then quickly turns into switchback after switchback all the way up, and I mean all the way up.  Feeling like there is no level stretch of the trail anywhere to stop to catch your breath, the hike leader and co-lead were attentive at encouraging us to pause for needed breaks. The views start off with lush green ponderosa pine forests.  Further along one can see the yellowed aspen with their silvery trunks dotted amongst the pines. As you continue to climb, you can feel the burn in your thighs with every step you take higher and higher.  Rock steps have been strategically built into some of the steeper parts of the trail.  One can clearly see the evidence of the volcanic rock and boulders all along the trail, making it challenging to climb over them! As you get closer to the summit, the long anticipated view of Flagstaff does not fail to mesmerize you.  Off in the distance you see many cinder cones and the cinder quarry.  Cinder cones, as I learned, were built by sporadic eruptions of cinders and volcanic bombs made of basalt.  We longingly look for the fire lookout tower on the top ridge.  Sandwiched between several radio towers, we find the sign indicating the total elevation of 9,299’.  In the distance, we remain transfixed on the extraordinary views of the area. We linger here to acknowledge the incredible feelings of accomplishment of yet another hike achieved!

The Elden murder, researched by historian John Westerlund, is part of Flagstaff history.  John Elden and new bride Susan moved to the San Francisco Peaks and built their homestead five miles east of what would be known as Flagstaff, along the Elden spring. Finding a spot beside water was hard to come by so needless to say, many a fight ensued over it.  Bob Roberts, a mule herder passing through, stopped to water his mules upon discovering the spring by the Elden cabin.  Susan  told the stranger that there was not enough water for their own livestock, let alone his mules and told him to move on.  Roberts, angry, left, but not before shooting his rifle toward the family, striking six year old John Jr.  Legend has it, a posse tracked down Roberts and he was hanged.  John Westerlund has done much research and discovered that there is little to support this account and that it is simply folklore.  Even though an Elden baby boy did die and was buried by the Elden spring, the tall tale continues to be told.

I have since driven past Mount Elden and I am still shocked at how high up that lookout point is and find it incredible that we were up there.  Hiking with the Sedona Westerners is always an adventure and if you learn a little local lore along the way, all the better.