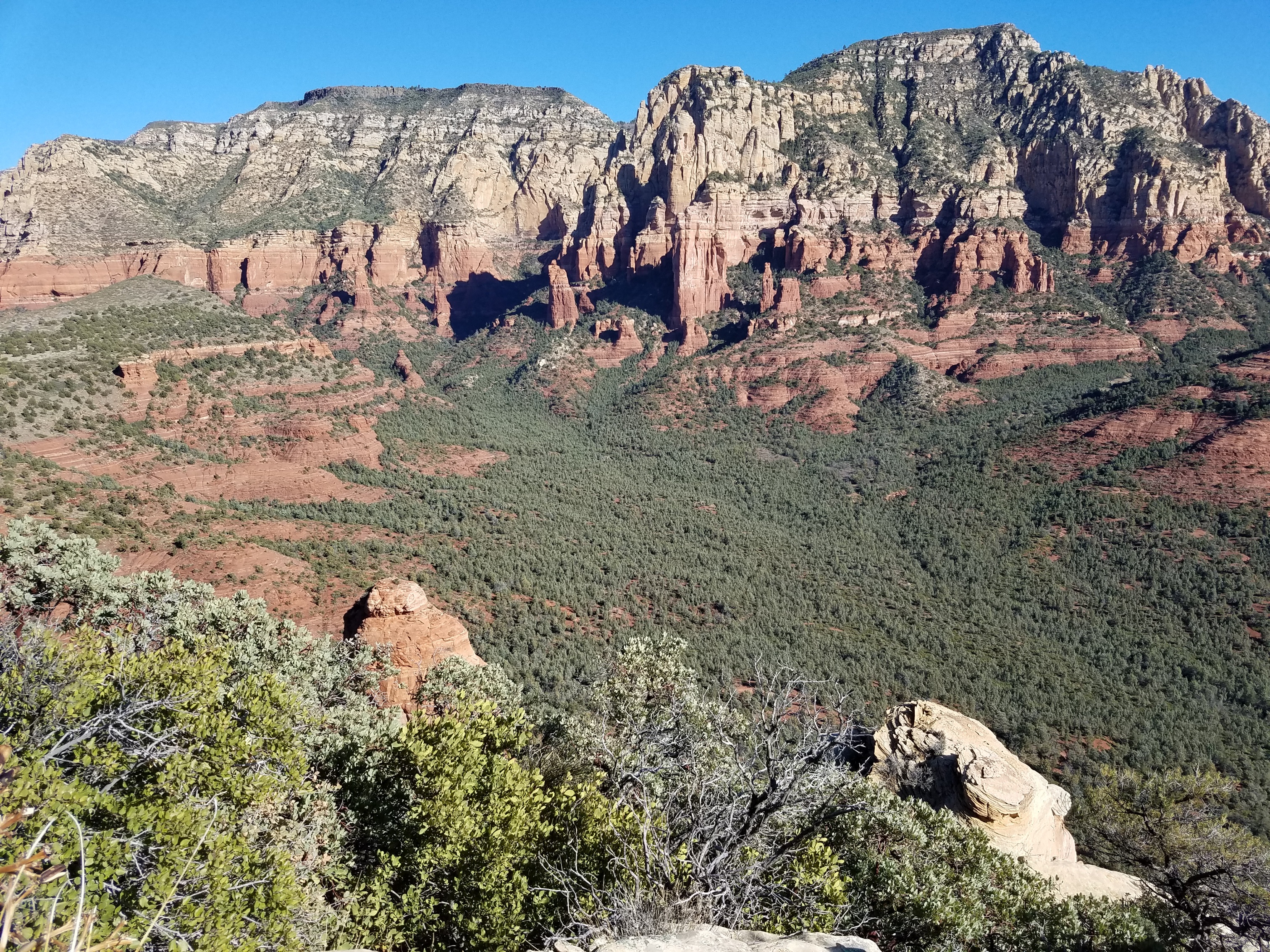 It can be a tough choice for “locals.”

A few active relatives or friends are due anytime, and it’s up to you to pick their first Red Rock hiking experience. With 100+ system trails in the Sedona/VOC area, which one has that special WOW factor that will impress them the most?

For me, it's really not a hard choice.  Brins Mesa, behind uptown off Jordon Rd., is a pathway of classic Red Rock splendor with a magic touch of folklore to wrap the whole thing up.  I'll get to the folklore later.  First comes the hike.

The trailhead is located at the end of a gravel road that is accessible going left at the top of Jordon Rd. The Brins Mesa Trail is straight up the hill past other signed trailheads for Jordon and Cibola, and an informative kiosk about the 2006 Brins Fire.  You and your guests will start getting magnificent red rock views within your first 100 steps.

Look up.  Straight ahead of you is the distinctive Cibola Mitten – that thing with two thumbs.  Behind it is a red rock ridge called the Sphinx, designated as Morning Glory Vista on topo maps.  A little further up the hill on your right is a broadside view of The Fin.  That will change as you head up to the mesa top.

On the way up, you can point out all the main red rock flora: prickly pear, agave, yuccas and manzanita. On the left, one end of Brins Ridge will come into view.  And when you glance back over your right shoulder, the Fin will appear to be getting thinner.

The trail is a fairly gentle grade at first, but it will get steeper as you get further into the hike.  About half way to the top, catch your breath on a red rock ledge that provides magnificent views of Wilson Mountain, picturesque Mormon Canyon below, and Munds Mountain in the far distance.

After 600 feet of climbing, you crest the top and a truly spectacular red rock world opens up in all directions.  This is what hiking in red rock country is all about: big views; really big views. And that's where the folklore comes in.

You see, Brins Mesa Trail originally was an old cattle trail that cowboys would use to drive small herds up to the top for summer grass. As the story goes, the herd was led up and down by a very discerning brindle bull. And this particular brindle really loved being up on top of the mesa. I mean he really liked it a lot.

While the cowboys never had trouble getting him to lead the herd up, getting the brindle to lead the cows down in the fall was another matter entirely.  And like us humans, the older he got, the more cantankerous and stubborn he became about leaving his beautiful high pasture.

Eventually, it became nearly impossible to get the old guy to budge.  So the cowboys finally decided to let the brindle remain on top to live out whatever time he had left.  And upon his passing, and out of respect for the brindle’s love of the place, the cowboys named this high pasture “Brin's Mesa” in his honor.

Now I don't know if this story is true, but it really doesn't matter.  The point is, that once you and your guests reach the top of Brins Mesa, you'll feel the same way as the old brindle.  You'll want to remain up there as long as you can.  And that, my friends, is really no bull.