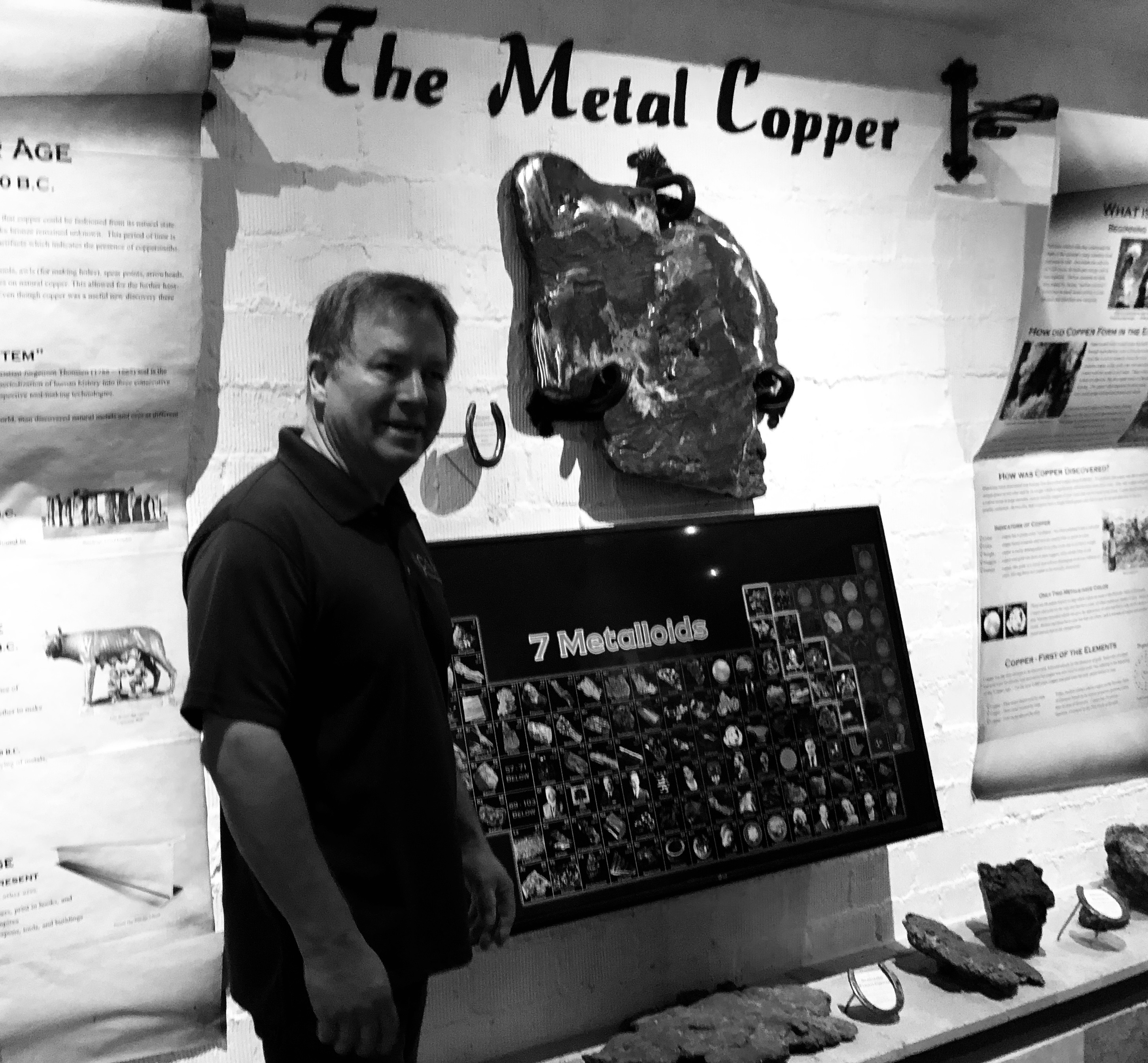 Arizona is nicknamed the Copper State and is fully recognized as such at the gem of a find in Clarkdale. The Sedona Westerners hiking group known as the Trackers had the opportunity to tour the Arizona Copper Art Museum recently along with the museum’s founder, Drake Meinke, who opened the museum in 2012 and who is making daily improvements and additions to its collections.

Clarkdale has a unique story in its own right.  Its namesake, William Andrews Clark, owned the local mines and numerous other businesses.  He became the wealthiest man in the country and was  labeled as America’s Copper King.  The former Clarkdale High School houses the museum. Imagine graduating from Clarkdale High along with a number of graduating classes that received a copper diploma as a unique keepsake.

After entering the museum through copper covered double front doors, we embarked on a nearly two hour tour of the 7 major areas of focus that the museum’s extensive collection covers.  Our first rooms set the stage through the stories about Mr. Clark, the modern day town as it was in the 1900’s, and the high school.  Next we moved into the more scientific, industrial and artistic aspects with the periodic chart pointing out that copper, along with gold, is one of the few elements through processing that results in whole pieces. Further processing of copper with tin will yield bronze, and copper mixed with zinc yields brass which, interestingly, has an oligodynamic effect in the elimination of germs.

Exploring the historical aspects of copper which is rooted in Cyprus and from which the name of copper comes, we learned about the heraldic symbolism, locations of copper mines throughout the world, a copper plate formed approximately similar to the state of Arizona with the names of mines and mining towns, and displays showing tools and other finished products.  For the artist, you will find history of how copper is used in paint.

Our next room went into detail on WWI trench art.  During the first Great War, the copper from Arizona mines helped produce nearly one billion artillery shell casings. When, on occasion soldiers had free time they took these spent casings, filled them with lead and proceeded to carve and hammer out the shell casings into elaborate designs.  There are approximately 700 of these pieces of art on display.  The lead was then reheated and given to fellow soldiers for more nefarious purposes.

Our next rooms, titled Copper as Art and Architecture included copper ceilings, a statue of liberty, a book titled Copper as Art with pictures of famous bells and bronzes such as the Wall Street Charging Bull, the Iwo Jima Memorial, the Liberty Bell, and Big Ben.  The last room in this section has an amazing facsimile of the original copper scrolls that are similar to the Dead Sea scrolls and were discovered nearby with the original scrolls kept and displayed in Amman, Jordan.  Also there are some unique copper postcards displayed in this room.

Our next stop was the Kitchenware room for a demonstration on how to properly line a copper pan so you will not be poisoned. The amount and variety of shapes and sizes of cookware although not too practical in today’s kitchen is almost overwhelming. The focal point from the view of this author was the Morice Stove from Strasburg France.  Our next two rooms were the Drinkware room and the Distillery and Winery Industry room. Interesting that silver turns glass to yellow, gold turns glass to red, copper turns glass to blue and a total absence of minerals also turns glass to a shade of blue! One saying seems to ring true as displayed and that is that copper is the most important metal in society.