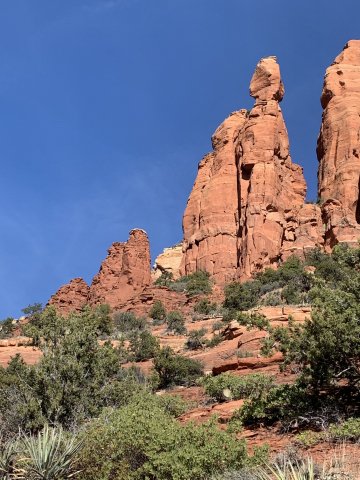 Teacup by any other name

As a third-generation Sedona Westerner, I was excited to start the New Year with fellow hikers on a medium-difficulty trek in the Teacup/Coffee Pot area. On Sunday, January 5, the Drovers hiking group of the Sedona Westerners assembled at the Posse Grounds for departure to the trailhead, but learned that the trailhead parking lot we intended to use was already full. Fortunately, a Drover who lives near the trailhead offered her driveway for our carpool. With that, the Teacup Heights hike was off to a good start.

The day was bright and clear as we meandered on system trails behind Coffee Pot Rock and over toward Sugarloaf Mt. and Teacup Rock. At that point, a lively discussion ensued about Teacup’s physiognomy and the appropriateness of its name. Teacup Rock just doesn’t look like a teacup!

The amicable if often-sarcastic banter about the supposed “Teacup” resulted in a volley of new name suggestions, including “brandy decanter,” “teabag,” “wine-bottle stopper.” We wondered who named that rock and why, and what they’d been imbibing as they did so. Meanwhile, a break atop Sugarloaf Mt. quieted everyone down—for a bit. Then the real fun started.

As we trekked toward Coffee Pot Rock, to venture along its lower and middle ledges, a bald eagle flew overhead, winging its way south and west toward the Verde River. Our whole group watched silently in awe. We then passed Shark Rock, its gaping mouth lined with rock “teeth” placed there by other hikers. We decided, however, that this rock more decidedly resembled a whale scooping up krill. As we hiked, icy patches still in the shadows along the trail were dutifully called out by our leader to prevent the more distracted among us (myself included) from taking any spills.

During our lunch break on a large rock outcropping at the base of Coffee Pot Rock, we noticed two rock climbers (with whom Dave had chatted at the beginning of our hike) starting to belay down from the top of the rock spire next to Coffee Pot. We discussed how rock climbing etiquette no longer allows defacing the rock while climbing – no more pounding steel anchors or drilling holes into the rock. I shared how my uncle, also a Westerner, had in his youth climbed Coffee Pot and waved from the top to my Grandmother (herself then a Westerner) living in Grasshopper Flats.

Making our way back to the trailhead, we passed numerous hikers and well-behaved dogs. As we rounded a corner, we saw a yoga class being held on a flat rock below. In all, we traveled approximately 5.5 miles and gained 750 feet in elevation. We traversed several imposing ledges, completed a bit of rock scrambling, and enjoyed some well-loved trails at the edge of town. New friends were made, old friends were asked about, and the Minotts’ hearty and delicious Hermit cookies were shared. All returned safely to the Posse Grounds following a fabulous hike ushering in the New Year.