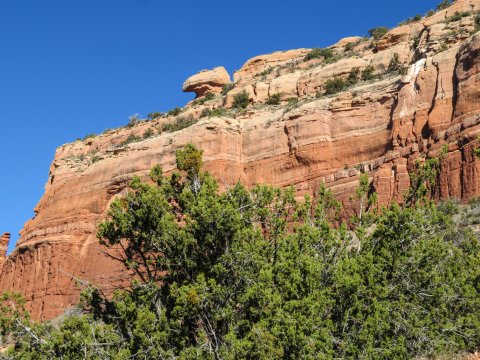 Sometimes the best Sedona hikes are not very far away.

On a crisp Tuesday morning the Dogies hiking group of the Sedona Westerners set out from the Thunder Mountain Trailhead, which is within the city limits in West Sedona.  A short scamper put us into the National Forest and away we went.

The hike is called Lizard Head, an aptly named feature at the end of the ridgeline stretching westward from Coffee Pot Rock, along Thunder Mountain (AKA Capitol Butte) and finally ending above Dry Creek Road.  The route would include most of the Lizard Head Trail itself, but also pieces of the Chimney Rock Loop.  The trail goes along the base of the Lizard Head, not to the top of it.

The route is considered moderate in difficulty, but parts of it have slickrock ledges with some exposure.  The hike leaders were careful to describe these sections to the new members so that they would have the opportunity to select one of the club’s easier hikes.  Fortunately, our beautiful Red Rock Country offers plenty of hiking at all levels.

The trail passes a few houses and quickly leaves civilization behind, climbing a small saddle between Chimney Rock and the Lizard Head formation itself.  West of the saddle is where the actual Lizard Head Trail comes in from the right, and for a trail so close to town it is remarkably little-traveled, whether by hikers or mountain bikers.

Mountain bikers?  Yes, the trail is open to mountain bikers, where it is known as The Upper Lizard Head Trail and is rated “extremely difficult”.  The mountain biking website MTBPROJECT.com gives these particulars: “The trail has been rerouted so that it climbs up to the base of the cliff to the north (and back down). Large portions of this rerouted section of the trail are unrideable, even by expert mountain bikers.” The Westerners did not encounter any bikers on this day, expert or not.

As we negotiated one of the trickier sections, a hiker recalled meeting two young women on the trail one Christmas Eve Day a few years ago.  The visitors were very well dressed in street shoes and fancy coats, and were more than willing to accept help getting back to their car at the Dry Creek Trailhead (the other end of the Lizard Head Trail). It all came to a happy ending when the novice hikers joined the locals for Christmas dinner later on.

In the end, having done the Lizard Head Trail in both directions, and the loop trail around Chimney Rock, the hikers had covered close to 6 miles for the day.  Thanks were offered to leaders Hassan Hosseini, Dave Minott and Dave Vanderwater, who were ably assisted by tailgaters Janet Oliver, Alan Gore and John Losse.