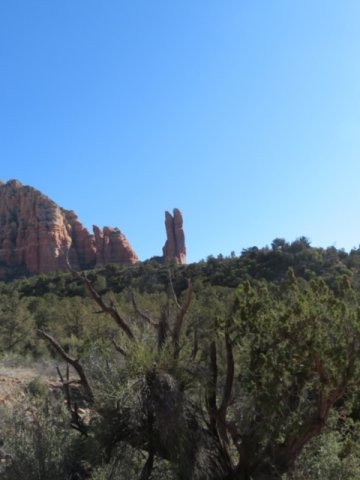 The majority of our visitors to the Sedona area park at the Bell Rock trailhead and proceed to circumnavigate the Courthouse and Bell Rock taking in the splendid views and visiting the vortex site.  In doing so they often miss a rewarding look to the east glimpsing an unusual geological piece of architecture known as the Rabbit Ears. On a very cold Tuesday a multi-layered group of hikers calling themselves the Sedona Westerner Dogies formed up behind leaders Dave Minott and Penny DeJarnette.  Out of the gate there was a much-appreciated attempt to warm us up as the leaders set a brisk but comfortable pace east along the Big Park Loop. As we rounded the Courthouse, we could not see our destination but it quickly came into view as we topped a small rise out of a much-travelled arroyo.

At this time of the morning the pathway and water in the tinajas were frozen, covered by patterned ice that caught the eye of some of our more artistic photographers. Tinajas commonly found in washes around Sedona are erosive features forming a series of small rock basins (sacred pools) along the line of stream flow.  Seasonally they fill with water.

It was noticed by one of our hikers that there were many more white colored boulders lining the wash than we are used to seeing during our hikes.  Initially that observation was arm waved away by our resident geologist as just Fort Apache Formation.  However, after conducting a closer examination it became apparent that the increase in white rock was a regolith consisting of boulders from the younger Kaibab Formation.  This upper limestone is much whiter than the lower lying Fort Apache and is unique in that it contains abundant, large, chert, shrimp burrows which are selectively eroded out of the limestone.  The source of these rocks is nearby Lee Mountain, a high standing cliff of upper Paleozoic rocks which bordered our hike to the north. It has a cap of Kaibab Limestone discontinuously overlain by flows of lava.

The Rabbit ears themselves consist of sedimentary layers of Upper Schnebly Hill/Lower Coconino Formation.  There is a major fracture which splits the rocks vertically and with subsequent erosion, forms a pair of lapin looking ears.  The ear to the north has a tilt near the top and it will be the first to come down resulting in a future hike with another name?

We were very fortunate on this hike that one of our leaders was an ex chuckwagon boss with an ingrained need to feed us.  Given that this was a Rabbit themed hike in a generally easterly direction, he produced an almost bottomless container of carrot cake (what no chocolate?) supplying us with a much-appreciated snack. Refreshed, we hopped to our feet and moved onwards down the rabbit ear trail.

After lunch the Dogies turned tail and with the Rabbit Ears now behind us our vision was filled with mega views of the Courthouse, a mostly red mesa, consisting of predominantly Schnebly Hill Formation.  All were wondering (or should have been wondering) at the natural forces of wind and water that must come into play over time in order to create and preserve a geological monolith of this proportion. The early afternoon light was just right causing cameras to come out.  Just before we reached the trailhead and home, we once again crossed a small fault that runs between the Courthouse and Bell Rock. To his surprise, only the resident geologist marked its passing.