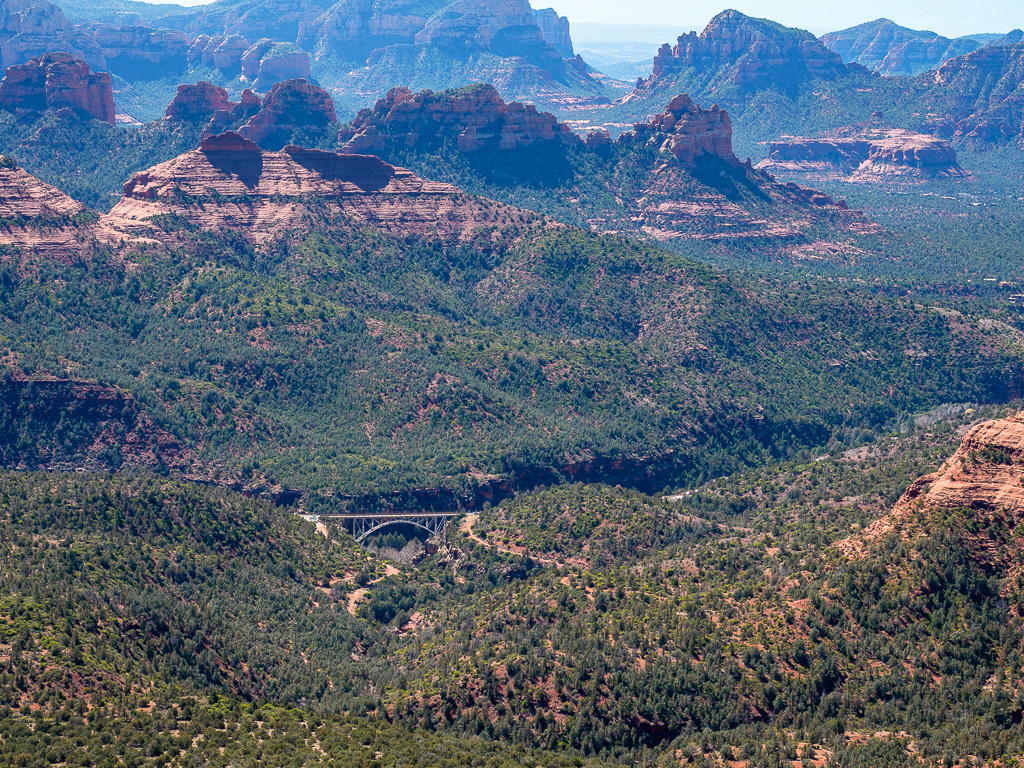 Our hike begins at Posse Grounds parking lot in Sedona at 9 am. I’m new to the group so it’s going to be interesting to see how many hikers show, if there is a little pep talk, and generally how the pre-hike gathering goes. Rolling into the lot, it’s obvious I’m in the right spot with all the hikers milling about and chatting to each other with backpacks and walking sticks everywhere. I’ve found the Westerners. We will leave in several vehicles for Midgley Bridge where some will park and a few will drive up to the Encinoso picnic area, leave their vehicles and then drive back down to Midgley in a shuttle vehicle. This will allow us to hike from Midgley and end in Encinoso and have vehicles staged for a return to Midgely. Plenty of thought has gone into this so we can hike from south to north instead of an out and back. I'm really happy it was planned this way since it's the best way to experience the eco diversity present on Mt. Wilson that you would miss on a simple out and back to the "bench" or the summit. You'll see what I mean as we hike.

I drove over with David and Pam from Posse Grounds. Pam will be performing tailgate duty of our group of eleven while Linda Warren leads. Linda will make sure we stay on trail and task while Pam will make sure no stragglers get left behind. I like that. To the bench we will have a gain of 1788’.  Starting this hike at Midgley you already have a primer of what to expect. Gorgeous views already abound and we haven’t left the parking lot. To the West is Wilson Canyon which we will be paralleling as we start our hike. Red rocks with the basalt capped Mt Wilson are always prominent, standing court at 7122’. Mt. Wilson got its name from a bear hunter, Mark Wilson, who was killed by a grissly in this area in 1855.

Starting out nothing is left to question.... we are climbing, and climbing we do with little reprieve until we reach the Bench. The hiking is all up and it’s steep, all of it. We are very early into the hike and all who were cool when we started are not so cool now. Everyone’s motors are revved up a bit necessitating one of our several clothing adjustments and pauses to catch our breath. These pauses allow us to soak in the beauty that’s all around us; a mixed chaparral of pinyon and scrub oak, desert holly, alligator juniper, and of course prickly pear and hedgehog cactus accenting our ascent. The red rocks, blue sky, whisper of white clouds, and the multitude of green hues exhilarate the senses and answers the question, “why do we hike?” This part of Arizona is in a league of its own and this hike is a worthy showcase of what’s out our backwoods. We continue onwards and upwards, Linda continuing to lead the group and Pam making sure no one gets left behind.

After a number of switchbacks, we make it to the bench where we break for lunch. For those who were warmed up by their efforts and who had removed a layer of clothes at our clothing adjustment stops, the clothes were coming back on at the bench. The bench is an exposed flat area of broken grey basalt with little shelter from the wind other than a few good sized junipers. We all settled behind a big juniper to block the wind, to soak in our efforts, the views and eat lunch. It’s here at the bench that you can either go to the summit, Wilson Lookout, or continue on the Mt. Wilson North Trail which will be our tack and ends in the Encinoso picnic area. If this was your turn around point back to Midgley Bridge you would be able to chalk up an outstanding Sedona hike that is overwhelmingly rated at five stars. Our hike has yet more to offer.

With lunch done and the other group of Westerners now on the bench Linda announces, ten minutes. In ten we are all gathered up, packs on, and heading out on the Wilson North Trail. Almost immediately you can notice a change in scenery.  The cactus are all but gone and the red rocks have changed to sheer walls of white limestone accented with black desert varnish in the distance. In between the walls of the canyon and our trail towards the lower elevations stand groupings of Douglas Fir. The fir are abundant in the lower and darkly shaded areas, and the Ponderosa pine are in the more open and sunny areas. Dougs require more water and are shade tolerant and the Ponderosa just the opposite requiring less moisture and more sun and yet here they are almost coexisting in the same environment. I say almost because in this canyon there are distinctly different micro ecosystems separating sunny and shady and moist and dry, depending on the available sun and drainage. To me this is quite remarkable to traverse two distinct conifer species with two very different requirements in such a short breadth of space, both proudly occupying a very small ecosystem and presenting such stunning silhouettes against the limestone walls. Most in our group considered the North trail to be steeper than our approach from Midgley but we were all grateful to be losing our elevation and quickly.

We were now down to the canyon floor with more sun and traversing through small stands of enormous ponderosa pines. These trees had to be 300-350 years old and so wide I could not stretch both my arms across them. Amazing! Every once in a while, we crossed areas of what appeared to be blow downs, but on closer examination, we could see that a lot of the fallen timber had burn scars. We were hiking through the 2006 Brins fire burn area. In the ensuing fourteen years nature has covered most of its tracks with understory green everywhere yet many charred black standing snags can be seen punctuating through the shrubs. Hiking out of this area our course flattens quite a bit and makes our going as easy as we’ve had it on this hike and pretty soon we are on final approach to Encinoso.

What a day this has been. As always, at the end of the hike we had about five to six different GPS and Step accountings of the distance covered, but the general agreement was about 6.3 miles for the entire hike. Everyone was in agreement that the steep grades were tough both gaining and shedding the elevation but were worth every step. We all sat around the picnic tables laughing and sharing stories waiting for our second group to make it in. Our shuttles back to Midgley Bridge and then back to Posse Grounds completed the last leg of this great hike. My rating...five out of five. Would I recommend this hike? Yes, and I would accompany them so I could do it again!

While the official hiking season is cancelled as of March 20, due to the Coronavirus, you can learn about the club by visiting the Sedona Westerners website at www.sedonawesterners.org/membership