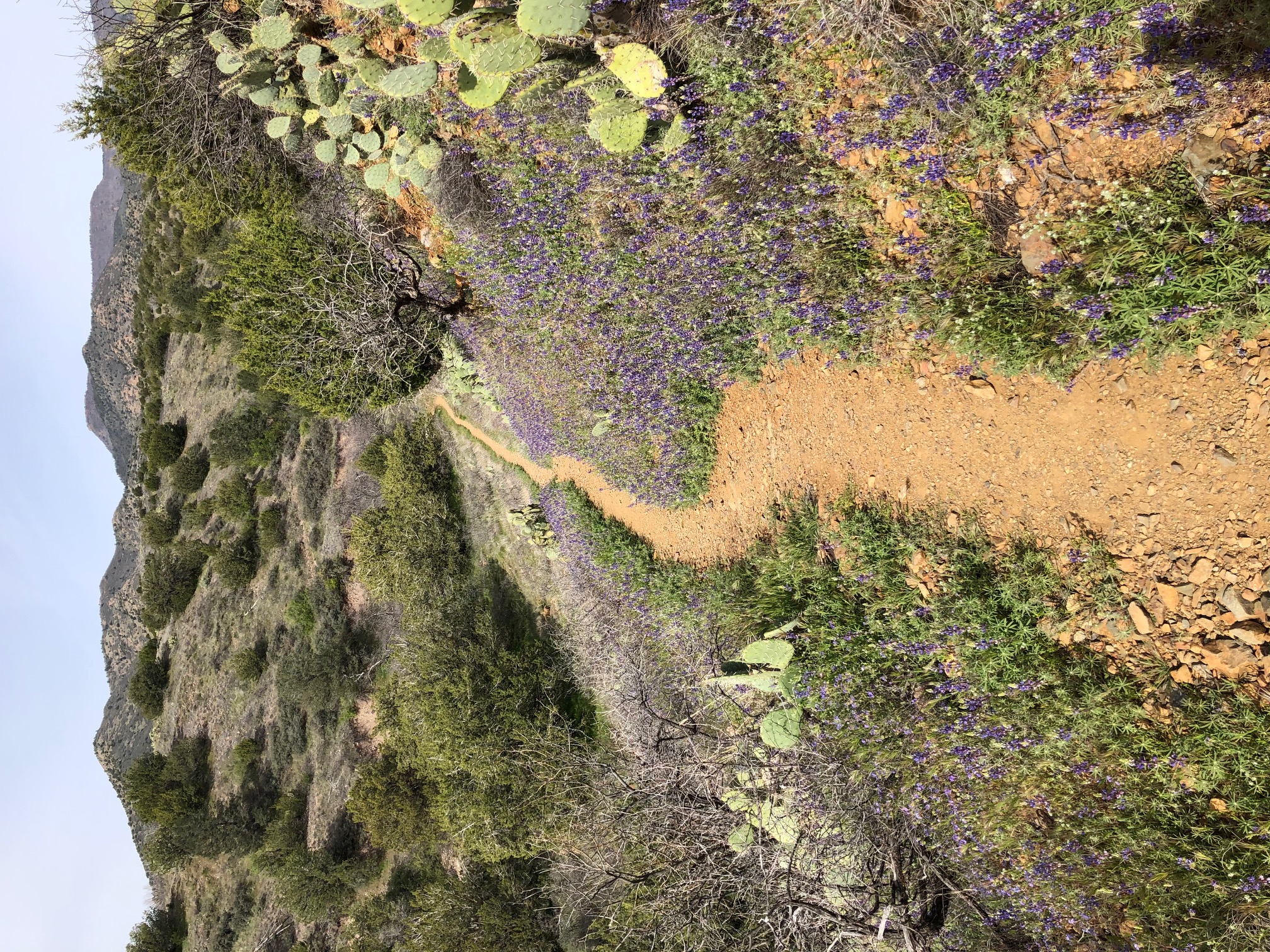 For several reasons, my husband and I have recently been hiking on the Black Canyon Trail.  First, it is the most convenient trail, as it is the closest one to our home in Cottonwood.  Second, it is way less popular, and thus less traveled, than the trails in Sedona.  So, one can hike and rarely be concerned with social distancing.  Third, it is a dependable workout, depending upon the pace.  After an initial dip to cross a wash, the trail is generally a moderate uphill for about three miles before leveling off and continuing further into the canyon.  If you are rehabbing, as my husband is, you can determine your turnaround point, and have a nice workout, hopefully improving your condition with each foray.  For those continuing into the canyon, there are many more curves, and wonderful places to see and explore, including a number of waterfalls.  However, getting to the waterfalls is challenging and should not be attempted unless you are in good condition and are accompanied by fellow hikers who know the way.

While we have been hiking this trail for practical reasons, we have been delighted to discover a profusion of early flowers along the trail.  Perhaps due to the extra rain in March and the increased elevation of the Mingus foothills, we were welcomed right out of the chute by carpets of purple lupine on the slopes of the wash.  Several clusters of bright Indian Paintbrush made their home in the bottom of the wash.  Once out the wash, our uphill trek began.  We hardly noticed the ascent as we were so enthralled by all the bulbs that were blooming.  The trail was lined on both sides with scads of blue dicks, and sego (or mariposa) lilies.

As we continued, there were numerous evening primrose plants, which open in the evening and close up during the day.  The open blossoms were large and white, but looked more pinkish and wilted when closed.  At one point we were so focused on admiring a flower that we did not notice a hiker and her dog taking a break, sitting quietly under a nearby tree.  Not wanting to startle us, she said “Good morning” in a hushed tone.  I looked around for the source of the voice, and said, “I thought you were Mother Nature speaking to us.”  We talked for a few minutes and then were on our way.  She wanted to go further, but was not sure how much more her dog could do. Since we never crossed paths again, I guess the dog had determined its turnaround point.

The trail continually zigzags back into the canyon, so each turn yields a vista of its own.   Blackfoot daisies bloomed alongside more lilies.  There were occasional blasts of color from the yellow barberry bushes.  A second gate on the trail marks the two-mile point.   After a short break there, we continued ascending and going further back into the canyon, where we encountered a beautiful example of Colorado four o’clock, as well as patches of fleabane, and globe mallow.  But the most stunning display came into view just shy of the three-mile mark.  Great clusters of poppies, bright yellow and orange, were blooming alongside the trail, as well as on the slopes on both sides of the trail.  Where these blossoms were crowded together with the red Indian paintbrush and the blue dicks, it had the look of a Monet painting.  After admiring this view for a while, we reversed direction and started back toward the trailhead, but not before encountering one more rare site.  A horse and rider were also enjoying the trail that day.  We had a brief chat with the young lady before she and her sure-footed, very mellow pony continued up the trail.

As is so often the case, turning around changes the perspective entirely.   Even in that short period of time, some things had changed, as the sun had coaxed more blossoms to open.  We also noticed more bees drawn by the abundance of flowers.  As we descended and rounded a curve, the gorgeous snow-capped tops of the San Francisco Peaks came into view.  Our view of them was short lived as we continued to lose altitude both on the trail, and while we were driving away from the trailhead.  However, we will see them again (and maybe some more and different flowers) on our next visit.