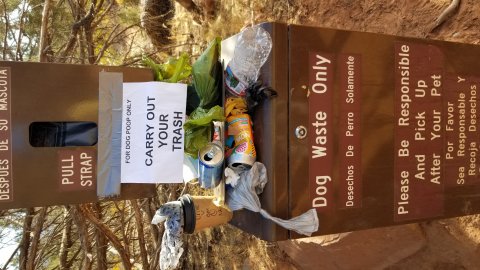 Photo courtesy of Brad Bell Ugly litter piled on top of a clearly signed Pet Waste box at the Soldiers Pass Trailhead, one of Sedonaâs busiest trailheads where there is no trash receptacle available. This photo was captured by Brad Bell, a member of the Sedona

It was just another day here in paradise.  A small group of Sedona Westerners were hiking the Secret Canyon Trail, heading for a favorite spot where the sandstone ledges overlook a series of black-water pools deep in the wash below.  It’s a special place that the Hiking Club has been visiting for over 50 years.  It’s a favorite of local photographers, too, as they search for that perfect “money shot” of the Sedona landscape.

Finally, a last turn on the trail and the group had arrived.  Conversations abruptly stopped as the garbage left behind from someone’s picnic came into view, scattered over the rock bench like bleached leaves.  Paper plates, fast-food containers, napkins, cans, and plastic bottles wobbled and twisted in the slight breeze, some eventually finding their way to the pools below.  Sadly, and mostly silently, the Westerner hikers picked up what they could and cut short their day, returning to the trailhead with a feeling of having been violated, like a hard slap in the face.

The Westerners have always picked up litter.  The first Club reference to picking up litter was contained in a 1979 write-up of a hike to Steamboat Rock, and it spoke with alarm of having come upon one plastic bag and one plastic water bottle.  Over the years the Westerners have frequently worked with the Forest Service (USFS) to remove large swathes of trash from the wilderness.  Club members have packed out mattresses, tiki-torches filled with kerosene, caches of rotten food, and even suitcases that have been used to dispose of dead pets.  Westerners always carry trash bags on Club hikes for the ubiquitous toilet paper, plastic bottles, and cigarette butts that decorate most Red Rock trails.  Other volunteer organizations such as the Litter-Lifters, Friends of the Forest, the Stewards of Sedona, and the Verde Valley Cycling Coalition have all found themselves working much harder to try and keep up with a litter problem that, according to the Arizona Department of Tourism, has grown exponentially worse in 2020.

It’s rare that the Westerners actually see someone litter.  Most trail-users seem considerate and respectful of Sedona’s fragile beauty, but clearly there are those that just don’t care.  In 2018 the USFS studied littering in three National Parks and estimated that up to 25% of visitors improperly disposed of waste.  If that number is hard to digest, consider that the Sedona trails are used by almost 1.5 million visitors yearly (a 3-fold increase since 2005).  Even if only 1% of these trail-users litter that is still 15,000 people dropping their garbage on the ground here every year; garbage that is becoming noticeably more abundant.

Clearly the problem would be far worse if not for the efforts of local trail-users and volunteer organizations like the Westerners, but, based on Club member feedback on conditions throughout the Red Rock Trail System, current volunteer efforts may not be enough.

What else can be done?

The Sedona Westerners will continue to do their best to keep our public lands as trash-free as possible.  No-one, visitor or resident, wants their Sedona experience to be spoiled by garbage.  Sedona’s Red Rocks don’t deserve to be disrespected or trashed.  It’s a hard slap in the face to our community, and it stings.

If you are interested in joining the Westerners club, please visit the Sedona Westerners  website at www.sedonawesterners.org/membership. Monthly meetings are only facilitated via Zoom at present until the Covid 19 restrictions are lifted.